a) Accidental cyanide pollution from mining;

b) Deepwater navigation waterway through the Bystre mouth of the Danube River;

The State Party submitted a report in February 2007 which included information on environmental monitoring, socio-economic issues, education, site management and navigation along the Danube for 2006. On 23 May 2008 two annual reports “Danube Delta Biosphere Reserve” dated February 2007 and February 2008 were received by the World Heritage Centre. However, no state of conservation report was provided by the State Party of Romania in 2008 as requested by the 30th session of the World Heritage Committee (30 COM 7B.24), nor any report by the States Parties of Ukraine and the Republic of Moldova.

The State Party had reported in 2007 that 2006 included record low flow during the winter and record high flow during spring in the Danube. The hydrological changes are having an impact on fauna including pelicans whose nesting sites are affected by variation in water levels and degradation of floating islands. These hydrological changes are linked to development in the river basin. Guidelines on architecture and building activities in the Danube Delta are being developed in consultation with local communities, however it is not clear if this effort to protect cultural heritage will also include guidelines to protect the property from uncontrolled and intensive development in the river basin. Information on fisheries resources indicates a decline in fisheries harvest. Fishing represents the main economic activity for local communities and infringements of the fishery regulations are widespread. The Warden’s Department were involved in 800 actions against illegal fishing in 2006 which resulted in confiscation of fishing gear and boats, and issuing fines.

The following progress towards implementation of the recommendations of the World Heritage Committee (Decision 30 COM 7B.24) is noted:

a) Implement the agreed activities of the 2006 trilateral conference held in Odessa and develop a shared vision between the States Parties of the Republic of Moldova, Romania and Ukraine;

(iii) Fully utilize legal and institutional tools for strengthening cooperation in conservation and sustainable development:The Lower Danube Protected Areas Commission that functioned from 2002 - 2003 as part of an EU Tacis project published, in 2005, a joint management plan for the Lower Danube Protected Areas, under an EU project led by the Danube Delta Biosphere Reserve Authority (DDBRA). This plan laid the foundation for the UNESCO Odessa Declaration. The Commission should be revived, perhaps through funding from the EU Neighbourhood Programme. Such international support could assist in setting up a bigger Biosphere Reserve in the Lower Danube region of Ukraine and Moldova. Funding should be identified to assist in the implementation of the Odessa recommendations. Information on this meeting is available from
http://www.ramsar.org/mtg/mtg_danube_ conference2006a.pdf

The State Party reported on a master plan, but it is unclear if this is for the entire Delta, or for the Romanian portion of the Delta only. It is also unclear if discussions have been held to develop and adopt common environmental standards, regulations, and policies with Ukraine and Moldova. However, the heads of Delegation to International Commission for the Protection of the Danube River (ICPDR) from Moldova, Romania and Ukraine signed an agreement committing to develop a “River Basin management plan for the Danube Delta supporting Sustainable Development”.

c) Navigation routes, any actual or potential impacts on the Danube Delta World Heritage property, and the implementation of proposed mitigation measures

In December 2007 ICPDR adopted the Joint Statement on inland navigation and environmental protection, which outlines criteria and principles for development of navigation projects in the Danube River Basin. The Joint Statement was developed and agreed by the Danube Commission (Navigation) and the Sava Commission and included participation by Ukraine and Romanian officials from the navigation and environmental sector.

On 18 April 2008 an informal meeting was held in Geneva among relevant international agencies and Conventions with the participation of a representative of UNESCO on the Bystroe canal project, on deep-water navigation in the Ukrainian sector of the Danube Delta. During discussions the status of protection and management of the Danube Delta was discussed and  the lack of response from Ukraine to the following conventions was noted: The Bern Convention requested documentation on the Environmental Impact Assessment (EIA) and compensatory measures; the Ramsar Convention seeks to review the measures to address the impact of navigation projects; the Espoo Convention, in January 2008, found the State Party of Ukraine to be in non-compliance and made several recommendations; and concerns have also been raised on the Bystroe Canal Project through the Water Convention and the Aarhus Convention.

The discussions focused particularly on the Convention on Environmental Impact Assessment (EIA) in a Transboundary Context (Espoo Convention), and key results included the following:

The organizations agreed: (a) to continue to coordinate their actions; (b) each to notify the other organizations on the outcomes of key events in the following months (including meetings of Parties); (c) to join, if possible and appropriate, a Bern Convention “on-the-spot appraisal visit” to Ukraine in July 2008; and (d) to meet again within one year to exchange information and experiences on specific issues common to the agreements and also to review developments on the matters discussed at the April 2008 meeting. The organizations agreed to invite the European Commission to the follow-up meeting, which would be more focused on implementation of practical measures. As a follow-up to this meeting, a letter from the Executive Secretary of the United Nations Economic Commission for Europe was sent to the Ukrainian Minister for Environment regarding the Bystroe Canal. On 21 May 2008, the Meeting of the Parties took a decision stating that Ukraine had been in non-compliance with its obligations under the Espoo Convention, and asking Ukraine to take a series of steps in the coming months and up to the end of 2008 to bring about compliance.

IUCN has received reports that continued dredging and extension of the Sulina Channel after it was closed by a shipwreck as well as on continuous development of tourism and infrastructure along its length continues to represent a problem to the integrity of the property.

IUCN also notes that media and other reports have identified that several EU policies and development initiatives in the region contradict each other and the goal of conserving the biodiversity and functioning of the Danube Delta. The programmes and initiatives which aim to promote sustainable development and conservation include: Natura 2000 project to protect the white willows of Danube Delta's islands; LIFE-Nature working to protect the Dalmatian pelican; and the EU Water Framework Directive on river basin management. The effectiveness of these initiatives could be limited by the goals of the Trans-European Networks initiative (aiming to turn parts of the Danube into a shipping waterway) whose funding comes to Romania from EU Structural Funds and to Ukraine through EuroAid. Other industrial and infrastructure projects in Romania and in the other 18 States within the Danube River Basin should also be assessed in terms of downstream impacts on biodiversity and ecosystem function.

IUCN has received reports that there is very low awareness of the Danube Delta World Heritage property as it forms only a small portion of the UNESCO Biosphere Reserve. The State Party is encouraged to highlight the values of the property in line with the Operational Guidelines I.C 15.

The State Party reported significant changes in tourism activity in the Delta as a whole with an estimated 100,000 visitors/year. It is not clear what proportion is visiting the property, as it was noted that the visitor recording system was not very accurate. Associated with these high visitor numbers is increasing motor boat traffic on the river causing noise pollution which disturbs wildlife and increased wave action that can erode the river banks and wetlands. The DDBRA has drafted rules for navigation but these have yet to be approved and implemented. Development of tourism accommodation has increased and much of the buildings do not conform to local architectural style. The Cultural Heritage News Agency reported, in July 2007, on a Master Plan for tourism in Romania. One of the reported targets of this plan was for nature, ecotourism and leisure tourism in the Danube Delta, particularly within the UNESCO Biosphere Reserve.

IUCN also notes the risks to the birdlife in the Danube Delta from a birdflu (H5N1) virus outbreak and encourages the State Party to report on its management of this and any other risk from disasters and to take into consideration the World Heritage Strategy on Disaster Risk Reduction for the property.

7. Requeststhe State Party of Romania to finalise, adopt and implement the following:

a) rules for navigation in the Danube Delta;

b) guidelines on architecture and building activities in the Danube Delta; and include mitigation measures for hydrological impacts from construction in these guidelines;

c) tourism Master Plan, while making every effort to ensure the protection of the Outstanding Universal Value of the property;

d) mechanism for transboundary cooperation on the Environmental Impact Assessment (EIA) of projects affecting the Delta;

8. Also requeststhe State Party of Ukraine to provide regular updates on the status of the Bystroe Canal project;

7. Requests the State Party of Romania to finalise, adopt and implement the following :

a) Rules for navigation in the Danube Delta;

b) Guidelines on architecture and building activities in the Danube Delta; and include mitigation measures for hydrological impacts from construction in these guidelines;

c) Tourism Master Plan, while making every effort to ensure the protection of the outstanding universal value of the property;

d) Mechanism for transboundary cooperation on the Environmental Impact Assessment (EIA) of projects affecting the Delta;

8. Also requests the State Party of Ukraine to provide regular updates on the status of the Bystroe Canal project; 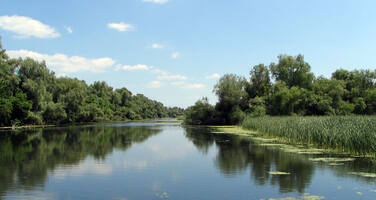