On 22 January 2009, the State Party submitted a detailed updated report on the state of conservation of the property addressing a) the restoration and construction projects reviewed by the World HeritageCommittee at its 31st session (Christchurch, 2007), as well as b) informing about the statutes of a Steering Committee to be set up for the World Heritage property.

a) Restoration and construction projects.

The project to convert parts of the Thurn and Taxis Castle into a hotel has been put on hold for reasons of economic viability. However, a construction permit was issued for the project in October 2007; it will remain valid until October 2011 meaning that the project could be implemented in the coming years.

The State Party reports that the Stone Bridge was entirely closed to motor traffic in August 2008 in view of restoration works to be carried out until 2014. The City Council further decided to restrict the bridge to pedestrian and bicycle traffic after the restoration. This decision however results in seeking alternative traffic solutions in other parts of the property and its buffer zone.

The State Party confirms that two tunnel options have been dismissed due to financial considerations. They are now considering two bridge options:

Option 1: The first option would be for a new low bridge located inside the buffer-zone to the East of the Stone Bridge with a small part also adjacent to the Eastern part of the property itself; it is considered to have little impact on the monument ensemble while however involving environmental concerns.

Option 2: The second option would be for a bridge located West of the Stone Bridge in the Western part of the property, requiring access ramps on each side of the Danube River; the regional authorities of Bavaria consider that it could be a problematic intrusion into the area.

The State Party intends to hold a competition for designs for both route options to enable their evaluation and clearly states that any binding decision in view of the construction project will await the World Heritage Committee’s examination of the project proposals in order to ensure that the final project is accepted as respecting the property’s Outstanding Universal Value. The State Party therefore solicits the World HeritageCommittee to give guidance on the above-mentioned bridge proposals and approval for the competition.

The Donaumarkt is an area of fallow land due to earlier demolitions to the east of the early medieval core city. The proposed development will reconstruct the former street and alley system aligning with the height of surrounding buildings. It will accommodate a mix of offices, housing/hotels, service facilities and restaurants. At the first meeting of the Steering Committee on 11 February 2009, a correction was requested in relation to building heights and roof shapes.

The Karmeliten Hotel’s southern façade is the historic link for the creation of Dachau Square, which is otherwise defined by the façade of the former Minoriten Church convent and the New City Hall of the 1930s. However the work is not proceeding at this time.

The Dachauplatz parking garage is also located on Dachau Square. The façade has been redesigned and archaeological remains have been preserved in the basement. ICOMOS notes that the building is now largely complete and can be accepted.

Arnulfplatz is a square in the old town in which there is a central bus stop. A line interchange allows transfer from one bus line to another. A new integrated bus shelter is proposed to be relocated to the southeast. The relocation has been criticized by the Bavarian State Office for the Preservation of Monuments as it would lead to a stronger disturbance of the northern façade of the Theater-und Gesellschaftshaus.

The Peterstor construction project was approved in 2001 but has not been commenced and the permit has lapsed. ICOMOS previously agreed that a new development of the property would be possible as long as the dimensions and height of the building followed the scale of the surroundings and did not dominate them. The City has now made clear to the developer that any new proposal must comply with the general condition as devised by ICOMOS.

The World Heritage Centre and ICOMOS consider that concerning the Stone Bridge, the City Council’s decision to restrict the bridge to pedestrian and bicycle traffic after its restoration is to be welcomed. World Heritage Centre and ICOMOS note the City’s identified need for a new transport route across the Danube and its proposal to hold a competition for the two bridge options.

However, it is considered necessary that a) an Environmental Impact Assessment taking into account the Outstanding Universal Value of the property and a traffic study be carried out for the 2 basic locations as a first step before a competition is launched; b) based on the results of the Environmental Impact Assessment to be submitted to the World Heritage Centre, a competition could be launched for the preferred option if appropriate; c) that the preferred designs should be submitted to the World Heritage Centre and ICOMOS for review. The World Heritage Centre and ICOMOS note that inputs to the jury could be provided, however not as members of the judging panel.

It is also noted that the State Party’s report including the proposals for the new river crossing were not included in the agenda of the first meeting of the Steering Committee on 11 February 2009.

4. Welcomes the initiative and progress made on setting up a Steering Committee for the World Heritage property and recalls the procedures stipulated by the Operational Guidelines in view of responsibilities, information flow and review requirements between the State Party, Advisory Bodies and the World Heritage Centre;

4. Welcomes the intitiative and progress made on setting up a Steering Committee for the World Heritage property and recalls the procedures stipulated by the Operational Guidelines in view of responsibilities, information flow and review requirements between the State Party, Advisory Bodies and the World Heritage Centre; 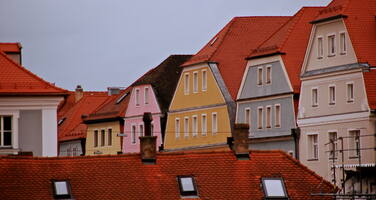