Total amount provided to the property: 2009: USD 24,000 for the inventory of the public spaces in Zanzibar; 2011: USD 14,000 for capacity-building in managing digital inventory; 2013: 49,935 USD for participatory mapping of HUL (Netherlands Funds-in-Trust). 2010-2013; USD 400,000 for Zanzibar and two other African sites under the World Heritage Cities Programme (Flemish Funds-in-Trust), USD 40,00 for Zanzibar for emergence works and capacity building (Oman FiT)

A joint World Heritage Centre/ICOMOS/ICCROM Reactive Monitoring mission visited the property in December 2019 (mission report available at http://whc.unesco.org/en/list/173/documents). Subsequently, the State Party submitted a state of conservation report on 28 December 2019, which is also available at the above-mentioned address, and responds in detail to Decision 42 COM 7B.51, as follows:

Subsequent to the report summarised above, the State Party submitted the HIA of the Michenzani Green Corridor Project (MGCP) as well as a proposal for the reuse of the Tippu Tip House to the World Heritage Centre for review.

The progress made by the State Party in establishing the CCTT, halting the Bwawani Hotel redevelopment, undertaking a survey of the property and the reported restorations are positive. The reported structural stabilization at the Palace Museum and at the Tippu Tip House are welcome. It should be noted, however, that the material regarding the emergency work at the Tippu Tip House was submitted to the World Heritage Centre only subsequent to its implementation, not beforehand as requested by the Committee (42 COM 7B.51). Recent submission of information notified that the building, like the Mambo Msiige building, had been leased to a hotel operator. A project proposal for the reuse of the structure, in part as restaurant and hotel accommodation, also allows for areas for displays relating to the person of Tippu Tip. This proposal has been reviewed by ICOMOS as not being appropriate to the significance of this building. The 2014, 2016 and 2017 Joint UNESCO/Advisory Bodies missions all recommended that the building be given a public education use and the Committee may wish to request that a use appropriate to the building’s history and significance be identified. The structural stability of the Palace Museum remains a source of great concern.

The State Party has also made progress with regard to the new integrated Conservation and Heritage Management Plan. This is an important tool to improve the management of the property and its completion and submission to the World Heritage Centre for review and subsequent implementation is urgent.

The mission further reported new initiatives at the property with potential to improve its state of conservation, including the Stone Town Mobility Management Plan, the Zanzibar City Centre Local Area Plan (Ng’ambo Local Area Plan) and the MGCP. A HIA for the MGCP was submitted to the World Heritage Centre and reviewed by ICOMOS.

Other envisaged developments remain points of concern, including the Darajani Corridor Business Centre, of which the negative impact on the Outstanding Universal Value (OUV) of the property had previously been noted by the Committee (42 COM 7B.51). This proposal needs to be reconceptualised and aligned with the Zanzibar City Centre Local Area Plan and the MGCP. The relocation of the container terminal from the Malindi Harbour to Maruhubi requires careful guidance. HIAs should be undertaken on the redevelopment of the Malindi Harbour and the development of the Maruhubi Harbour, which is located within the property’s buffer zone.

The House of Wonders is a key attribute of the OUV of this property. The future rehabilitation of the building is a complex challenge that will require a thorough analysis of the current structural state of the building and the methods with which it was constructed. All potentially reusable components of the building need to be salvaged.  The Operational Guidelines state that “Reconstruction is acceptable only on the basis of complete and detailed documentation and to no extent on conjecture” (Paragraph 86). Therefore, much archival and on-site investigation is required into the successive stages of the building over its history. The technologies utilised in its construction will need to be carefully studied before a rehabilitation strategy can be developed. At the same time, thought needs to be given to the future use of the building as a key attribute of this property.

The idea of composing a Scientific Committee team to assist in developing the museum displays and the technical requirements for the museum to function properly is all the more welcome. Such a committee could be expanded to assist and advise the State Party on the investigations required to come to a rehabilitation strategy that supports the contribution of this important attribute to the OUV. 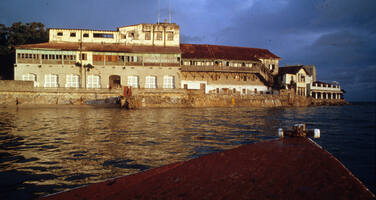