Total amount granted in the framework of the Kurdistan Regional Government Funds-In-Trust:

On 21 November 2017, the State Party submitted a state of conservation report. An executive summary of this report is available at http://whc.unesco.org/en/list/1437/documents/. The State Party addresses the progress made in implementing the recommendations adopted at the time of inscription of the property on the World Heritage List, noting that:

Considering the very difficult conditions that continue to prevail in Iraq and the region, the commitment and resolve of the State Party to the conservation and management of the property under difficult conditions should be noted, as it was in 2016.  Added to this is the commendable engagement of the international community and local parties in various fields of action.

One such field is the continuing archaeological investigations in response to the recommendations made by the World Heritage Committee at the time of inscription in 2014. These actions are continuing to yield results, which are being disseminated internationally through conference presentations and academic articles, with more publications being planned at present. The information gained through this has reached a volume that needs to be transmitted to the World Heritage Centre for review by the Advisory Bodies in order to finalize the Statement of Outstanding Universal Value (OUV) for the property, which is currently still provisional.

The HCECR is active in engaging investors to rehabilitate the tell-top settlement and stabilise structures, especially at the edge of the slope. It was already noted in 2016 that it would be prudent to ensure that the tell-top settlement is not redeveloped for the most part as a commercial and cultural precinct but instead retains as much as possible its current residents while other permanent residents are stimulated to settle here.

The State Party’s engagement of international consultants is noted, addressing the Committee’s request to reconsider the location, or substantially modify the design, of the proposed Kurdistan National Museum in order to harmonize it with the Citadel and its setting. It remains of high importance that the draft setting and design concepts for the proposed museum be submitted by the State Party, for review by the Advisory Bodies, before the project is approved or any tenders are awarded for its construction.

The implementation of the UNESCO ‘Erbil Citadel Revitalization Project-Phase II’ was completed on 30 April 2017. This project contributed to reinforcing the capacities of the HCECR in documentation, conservation and sustainable management of the property and to revitalizing and the urban fabric by enhancing the visitor’s experience and restoring the Citadel's most vulnerable attributes.

The period under review has not brought any overt new threats to the OUV of the property, which is being conserved and developed by the State Party along the same trajectory as during the previous review period, despite the continued instability in the region. The State Party also reports that no major developments are planned at present that may affect the OUV of the property or its setting. 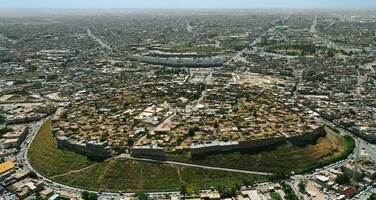