On 1 February 2018, the State Party of Uzbekistan submitted a report on the state of conservation of the Uzbek components of this serial property, which is available at http://whc.unesco.org/en/list/1490/documents/, and provides the following information:

On 9 April 2018, the State Party of Kazakhstan submitted a report on the state of conservation of the property, also available at http://whc.unesco.org/en/list/1490/documents/. With regards to the trilateral MoC, the State Party provides some further details regarding the process by which the draft was developed and notes that signing of the MoC has been delayed since mid-2017, due to significant ongoing changes in the management system of protected areas in Uzbekistan. A copy of the MoC (in Russian) was submitted by the State Party with its report.

The State Party of Kyrgyzstan did not submit a report on the state of conservation of the property.

The information provided by the States Parties of Kazakhstan and Uzbekistan regarding the elaboration of a trilateral MoC on the management and protection of the property is welcomed. It is, however, regrettable that it has not yet been signed by all three States Parties and it is therefore recommended that the Committee urge the States Parties to complete the signing of the MoC as soon as possible and to expedite the actions required to operationalize the MoC, once duly signed by all three States Parties, particularly with regards to the establishment of the planned joint steering committee, which would assume coordinating functions. Development of a functioning transboundary management framework for the property will require additional efforts and in this regard, it should be recalled that in its Decision 40 COM 8B.9, the Committee also requested the States Parties to work in consultation with IUCN to build capacity on transnational management of the property.

With regards to the information provided by the State Party of Uzbekistan regarding the management provisions for the Bashkizilsay and Maydantal areas of the Chatkal Biosphere Reserve component of the property, it is recommended that the Committee request the State Party to clarify the role of the railway company in the protection of the property, and provide more detailed information regarding potential changes in the management system that result from these decrees, and possible impacts on the conservation of the Outstanding Universal Value (OUV) of the property. 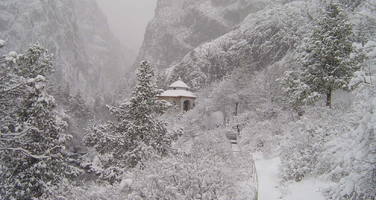