The State Party did not submit the state of conservation report which was requested by the World Heritage Committee at its 39th session (Bonn, 2015). Therefore, the present report relies on the report of the joint World Heritage Centre/ICOMOS Reactive Monitoring mission, carried out from 19-22 April 2016, whose report is available at https://whc.unesco.org/en/list/143/documents/.

The property has endured a long period of neglect and lack of adequate maintenance. There has been no regular or systematic monitoring of the state of conservation of the property nor of individual monuments. Among others, the unregulated use of the property for purposes such as contemporary burials represents a serious threat. Evidence of a recent fire in the immediate vicinity of the historic monuments and the presence of garbage throughout the site indicate a lack of security and maintenance.

The Mausoleum of Jam Nizzamuddin remains in a perilous state. The installation of crack monitors, a weather station, and the soil investigation, which were recommended by the Reactive Monitoring missions of 2006 and 2012, have not occurred. Many structures that are of high relevance for the architectural history of the region are in severe danger of collapse and show signs of bacterial activity that is damaging to the buildings’ fabric. Furthermore, there is no work plan for emergency stabilisation. Previous stabilisation work dating back to the 1970s–1990s remains, but there has been no subsequent programme for long-term solutions to prevent further movement or collapse. Displaced elements of the original building fabric, including original glazed elements, litters the site.

No major conservation work has been carried out for at least a decade. Conservation projects have occurred at the mausolea of Jan Baba and Sultan Ibrahim, carried out by a Karachi-based NGO, but work at the mausoleum of Sultan Ibrahim has stopped. Two examples of recent work undertaken in 2015 by the Department of Archaeology of the Government of Sindh are noteworthy: the restoration of a series of gravesites near Sultan Ibrahim mausoleum and partial masonry repair/infill within Lali Masjid. In both cases, the work was highly inappropriate: individual tombs were reconstructed and plastered with stark white lime without any indication of new interventions versus historic fabric. At Lali Masjid, the infill masonry incorporated was visually incompatible and the work was only carried out on one portion of the structure, despite the fact that a number of areas show basal masonry loss in need of stabilization.

The boundary and the buffer zone for the property were established in 2013, but the wall which demarcates the buffer zone along the west side of the property is only partially completed. The Master Plan for the property is reported to be in its final phase of development, but will then need to be officially approved and the substantial resources required for its implementation will need to be allocated. At present, the draft Master Plan lacks an adequate management plan including risk management and emergency response elements to ensure the safety of the site, its monuments and its visitors in case of disaster.

The April 2016 joint World Heritage Centre/ICOMOS Reactive Monitoring mission reports that the property is in a deteriorated state and shows significant loss of integrity. The identification of the property and its buffer zone and the documentation of structures within the property seem to be the only activities undertaken since 2006. Very few of the recommendations made by the 2006 and 2012 missions have been implemented.

There has apparently been no monitoring of the site’s condition and its security, nor any visitor supervision or general maintenance. As there are no site security measures, the property suffers from serious encroachment by new burials and damage from vandalism, graffiti, and waste dumping. Many of the historic monuments that were listed as strongly contributing to the Outstanding Universal Value (OUV) of the property at the time of inscription, in 1981, have lost important structural and decorative components, such as portions of domes or their glazed tiles. The architectural style and decoration represent one of the principal attributes of the property’s OUV, which is consequently threatened.

Although progress was made in the finalization of the Master Plan, the integrity of the property has diminished, and unless urgent mitigation measures are put in place immediately, the OUV of the property will remain at risk. Besides urgent conservation work, there are a range of additional matters that should be addressed on an urgent basis, including risk management and emergency response provisions, actions to address encroachment of new burials as part of the living tradition of the local community, and various other unregulated uses of the property. The lack of progress with the monitoring, analysis and repair of the Mausoleum of Jam Nizzamuddin, despite the recommendations of previous missions, is regrettable, as is the cessation of conservation works at the mausoleum of Sultan Ibrahim. The stabilisation and long-term conservation of these and other major monuments is crucial to retain important attributes of the OUV of the property.

For several years, the State Party has not addressed either long- or short-term conservation imperatives at the property. The property is in a perilous state of conservation, reflecting neglect and inadequate maintenance and protection, which result in the deterioration of important elements and attributes, threatens the integrity and have a direct negative impact on the OUV of the property. Additionally, recommendations from previous missions have not been fully implemented. It is thus recommended that the Committee strongly urge the State Party to implement all of the recommendations of the 2016 Reactive Monitoring mission to mitigate the current situation, which greatly threatens the OUV of the property.

Should the State Party fail to endorse and implement the relevant measures in order to prevent any potential threat to the attributes that sustain the OUV of the property, it is recommended that the Committee consider the inscription of the property on the List of World Heritage in Danger at its 42nd session in 2018.

The attributes that sustain the OUV of the property are subject to potential and ascertained threat, sufficient to warrant the immediate inscription of the property on the List of World Heritage in Danger. 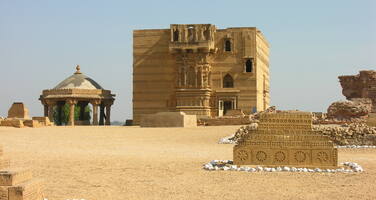