As no one from IUCN, ICOMOS or UNESCO had ever paid a visit to this "mixed" site, IUCN took the initiative and requested the Australian authorities to arrange a field visit in April. It has long been known that there have been some problems with landowners resident in the site, that aboriginal concerns were being raised and that no management plan was available 13 years after it was requested by the Committee. The conclusion of the two day visit which involved meetings with State and Commonwealth officials as well as representatives of the aboriginal groups, the Willandra Landholders Protection Group and the Wentworth Shire Council, was that Willandra has been the most neglected of all Australia's World Heritage sites and urgently needs attention.

Fortunately, this attention is now being given as the Commonwealth, through DEST, has recently increased its involvement in matters relating to the site and is cooperating with the State of New South Wales to resolve the many issues that are outstanding. A full briefing document has been provided to IUCN on the activities now underway which include the establishment of a Community Management Council, a Technical and Scientific Advisory Committee and the release of a Strategic Issues Document. A socio-economic impact study is now underway and the Commonwealth is making funds available to assist the State in management.


IUCN was convinced that the goodwill now exists as well as the financial means to address the long overdue issues that relate to this "forgotten" site. All indications are that much progress will be made over the next 6 - 8 months.

One action that can be anticipated is a review of the appropriate boundaries of the site which were hastily and arbitrarily drawn up in 1980 without sufficient regard to location of the World Heritage values. A study of the region concluded that the whole southern third of the property contains little material of archaeological or scientific value. Also from the natural heritage point of view, the entire Prungle, Banoon and Turlee areas could be omitted from the site. Similarly the existing heritage boundary does not include the whole of Zanci station which is now a part of Mungo National Park. There is some valuable mallee vegetation occurring here which should be part of the site.

A second major issue relates back to the inscription of the site in 1981 on both natural and cultural criteria. IUCN's technical evaluation at the time was not convinced of the site's universal value and recommended deferral. Based on the brief visit made in April, IUCN would suggest that the site is predominantly a cultural one and a re-nomination should be considered on these grounds alone.

Finally, the Willandra Lakes experience illustrates several important lessons:
6.   SUGGESTED ACTION BY THE WORLD HERITAGE BUREAU:
The Bureau should register concern with the Australian authorities that Willandra Lakes has not progressed to the normal high standard of management evident in other World Heritage sites. Current initiatives to achieve this, however, are underway and should be encouraged. The Bureau should also suggest the site be considered for re-nomination based on cultural criteria and a reduced overall size.

The Committee was informed of IUCN's field evaluation report on the state of conservation of this property. It requested the Australian authorities to review the boundaries of the site and to continue their recent progress in improving the management of the site.

The Bureau was informed by IUCN of the first World Heritage mission to this mixed site. The report indicated problems at the site with landowner residents, aboriginal concerns as well as the fact that no management plan has yet been prepared. However, the Commonwealth is taking up these issues and furthermore, a socio­economic impact study is underway. IUCN suggested that all authorities consider renominating the area under cultural criteria and with a reduced boundary. The Observer of Australia informed the Bureau that through the agreed management arrangements for the site, a review of the boundaries is being conducted by a Technial and Scientific Advisory Committee. The results of this review will be conveyed to the World Heritage Centre.

The Bureau took note of IUCN's suggestions that the Willandra Lakes site be considered for a revised nomination based on cultural criteria and that redefinition of the boundaries of the site be considered. The World Heritage Centre was requested to consult the Australian Government, ICOMOS, the International Union of Geological Sciences and IUCN and to report back on the findings to the Committee. 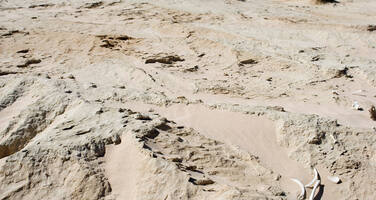