Construction of hotels in the safeguarded sector (issue resolved)

The international seminar on the Safeguarding of the Rock-Hewn Churches of Goreme which was held in situ from 5 to 11 September 1993, with assistance from the World Heritage Fund, was instrumental in identifying the progress made in research and treatment methods for the conservation management of the site, the materials used, the structural conservation, the conservation of the mural paintings and a Plan of Action adapted for the future, proposed by the specialists attending the Seminar. These proposals will contribute towards the improved conservation of the site. The most urgent proposals are:

1. The safeguarding and development proposal of Cappadocia, which is not yet ratified by the Turkish Parliament, should be formalized as soon as possible.

2. To evaluate and direct the work, an interdisciplinary committee with national and international experts should meet regularly.

3. A local team should be formed comprising a conservator of mural paintings, an architect-restorer, a specialist in materials and an art historian for the documentation and the charting of the region.

4. It is essential to establish a Centre for scientific and technical operations, instrumentation methods, documentation and conservation records, the establishment of a scientific data bank to monitor the rate of deterioration, and to evaluate the graphs which show with regular precision the evolution and the results obtained from photographic and photogrammetric data.

An already constructed building was proposed for the establishment of the Centre.

5. A workshop and a laboratory with instruments and tools necessary for the needs of the region should be used by a regional team.

6. At the same time, a programme should be implemented throughout the region comprising the following elements: recordings, immediate safeguarding, a permanent maintenance system, development of ancient treatments, background information for each cultural era, recordings and documentary information with photogrammetric data, photography, etc., petrographic analyses and micro and macro geological research, sociological and economic research for the development of tourism and regional projects.

7. No structural consolidation has been carried out on the churches, monasteries or rock buildings of the region to date, except for El Nazar. Projects should be prepared for the conservation of buildings threatened by collapse. The first to be safeguarded are the Churches of Elmali-Ste Barbara, Ste. Vierge (Meryem Ana), Sakli and El Nazar.

8. An emergency team for the structural consolidation (mechanical rock engineer, architect-restorer, structural engineer, geologist), should be formed. Proposals should be prepared following the advice of the conservator of mural paintings together with the regional preservation specialist.

9. When both deterioration of the rock and the mural paintings are concerned, the decisions and implementation should be undertaken within a multi­dimensional programme.

Göreme National Park and the rock sites of Cappadocia (Turkey)

The Bureau was informed that the Proceedings of the International Seminar on the Preservation of the Rock Churches of GSreme, which was held at the site from 5 to 11 September 1993 with the support of the World Heritage Fund, are currently under publication at ICCROM, in close collaboration with the Turkish authorities in charge of conservation. The World Heritage Fund provided US$ 10,000 to finance this publication. The Bureau took note of this information. 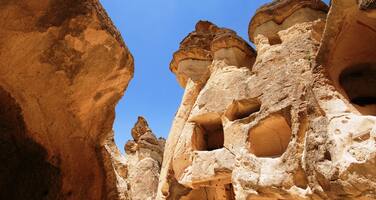