The short joint report focuses on transboundary cooperation. While its positive intent is welcomed, the report provides insufficient information to assess current and planned activities. Given the many linkages between the contiguous properties, a formalized transboundary cooperation framework, as requested by the Committee on several previous occasions, is still needed to ensure adequate coordination. The additional separate report from the State Party of Brazil notes little progress on this issue.

While the clear position of Brazilian government against the re-opening of the “Settler’s Road” is welcomed, there is some concern about the continuing possibility of another re-opening of the road after the issue appeared to be concluded in 2001. The Interior Atlantic Forest is a recognized global biodiversity conservation priority and a main justification for the property’s inscription (in addition to the spectacular waterfalls). The Interior Atlantic Forest has suffered massive forest loss, degradation and fragmentation over centuries and is highly threatened. It is scientifically recognised that the road would increase disturbance and open the area to poaching and illegal harvesting. The illegal opening of the road in 1997 led to the Committee decision in 1999 to inscribe the property on the List of World Heritage in Danger (Decision 23 COM X.B.20). A re-opening of the road would create the conditions to re-inscribe the property on the List of World Heritage in Danger, in line with Paragraph 180 of the Operational Guidelines.

Concerning the Baixo Iguaçu Hydroelectric Project in the immediate vicinity east of the property, there is some serious concern that no information has been provided on the possible impacts on the Outstanding Universal Value of the property and the neighbouring property of Iguazú National Park in Argentina. The intention to start construction should have been communicated to the World Heritage Centre according to Paragraph 172 of the Operational Guidelines and as requested by the World Heritage Committee (Decision 36 COM 7B.29) in 2012. The construction should be halted immediately to permit a comprehensive assessment of the implications of the project on the Outstanding Universal Value (OUV) of both properties, in conformity with IUCN’s World Heritage Advice Note on Environmental Assessment.

The research on AIS indicates an urgent need for effective management activities in both properties, requiring international collaboration. It is noteworthy that concessionaires operating in the property are contractually obliged to eradicate AIS. However, compliance and effectiveness remain unclear.

The updating of the management plans in both properties constitutes an opportunity to develop a coherent response to the many conservation challenges. These include AIS and public use, but also illegal activities such as extraction of palm hearts and poaching. The property is Brazil's second most-visited protected area and generates substantial revenues and employment. The enormous potential for conservation financing remains to be fully realized. As a minimum, revenues should be used to ensure law enforcement and to implement management activities including public use, communication, education and awareness. In the short term the possible re-opening of the “Settler's Road” and the construction of Baixo Iguaçu require urgent attention of the World Heritage Committee. Therefore, it is recommended that the Committee request the State Party of Brazil to invite an IUCN reactive monitoring mission to the property, to assess the status and impacts of these issues and the overall state of conservation of the property. It is also recommended that a mission to Brazil also be given the opportunity to meet with Argentinean counterparts to discuss matters of mutual concern.

3.  Notes with utmost concern that the construction of the Baixo Iguaçu Hydroelectric Project appears to have started and requests the State Party to halt the construction with immediate effect, and to provide the World Heritage Centre with a detailed Environmental Impact Assessment (EIA) in accordance with Paragraph 172 of the Operational Guidelines, and in conformity with IUCN’s World Heritage advice note on Environmental Assessment;

4.  Also notes with significant concern that the continued risk of the re-opening of the "Settler's Road" has not been unambiguously removed, recalls that the illegal opening of the road in 1997 led the Committee to inscribe the property on the List of World Heritage in Danger;

5.  Considers that a re-opening of the “Settler’s Road” or the continued construction of the Baixo Iguaçu Hydroelectric Project prior to an assessment of impacts on the property’s OUV having been completed, could create the conditions to re-inscribe the property on the List of World Heritage in Danger in line with Paragraph 180 of the Operational Guidelines;

6.  Expresses its concern about the changes to federal protected area legislation as proposed in Bill 7123/2010, which would enable road construction in protected areas, and which could also impact on other World Heritage properties in Brazil, and urges the State Party to rigorously ensure that road construction in World Heritage properties affected by this Bill remains prohibited by law;

9.  Also requests the State Party of Brazil to invite an IUCN reactive monitoring mission to the property to assess the status and potential impact of the Baixo Iguaçu dam and the “Settler’s Road”, and the overall state of conservation of the property; 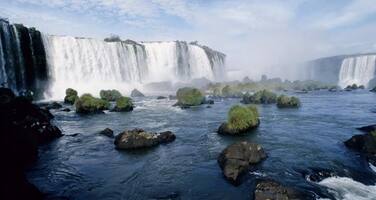