De-mining of unexploded ordnance (UXO) at the site.

My Son is located along the Ho Chi Minh Trail and was one of the prime areas where unused ordnance was dumped during the Vietnam War.

In the years following peace in 1975, the Vietnamese authorities de-mined four main monumental area of surface unexploded ordnance (UXO). With the assistance of the German, Italian and Polish experts, restoration has been carried out on some of the principal brick towers composing a part of My Son World Heritage property. However, archaeological research of two newly-discovered areas, restoration of eight monumental areas, and site presentation for visitors can not proceed as de-mining has not been completed.

At the request of the Vietnamese authorities, UNESCO Bangkok Office, the Italian Government and the Lerici Foundation carried out a 3-year research project (1999 - 2001) to use non-invasive methods to map the underground archaeological remains of the My Son World Heritage Site. Identification of buried structures as well as UXO has been completed in 2001.

UNESCO is closely co-ordinating with the Armed Forces of Viet Nam providing them with detailed GIS maps of the areas that still remain mined. The process of removing the UXO is progressing slowly, mainly due to lack of funds.

To facilitate both the UXO-removal and restoration work on site, the UNESCO Bangkok Office, together with the Lerici Foundation and the Ministry of Culture and Information of the Government of Viet Nam, prepared the project “Safeguarding of My Son World Heritage Site--Demonstration and Training in the Application of International World Heritage Standards of Conservation at My Son Group G Monuments”. This project has been approved by the Italian Ministry of Foreign Affairs for an amount of US$ 812,470, to be financed under the UNESCO-Italy Funds-In-Trust Co-operation Agreement, brokered by the World Heritage Centre. The implementation of this project will be co-ordinated by the World Heritage Centre, in co-operation with the appropriate UNESCO field offices.

The Bureau expresses its appreciation to the authorities of Vietnam, UNESCO Bangkok Office, the World Heritage Centre, and the Lerici Foundation for having prepared a project to enhance the security, management, conservation and presentation of the unexcavated areas with UXO of My Son World Heritage Site, and thanks the Government of Italy for its generous support. The Bureau requests the World Heritage Centre to report on the progress made in implementing this activity to its 27th session (April 2003).

XII.98    The Secretariat informed the Bureau that the presence of unexploded ordnance (UXO) at the site, following the Vietnam War, has affected the archaeological research of newly-discovered areas, restoration of eight monumental areas, as well as site presentation for visitors.  The Bureau noted that the Vietnamese authorities demined unexploded ordnance at four main monuments since 1975. This demining work is progressing slowly, mainly due to lack of funds.

XII.99    The Bureau also noted that, at the request of Vietnamese authorities, the UNESCO Bangkok Office, the Italian Government and the Lerici Foundation carried out a three-year research project (1999--2001) to use non-invasive methods to map the underground archaeological remains of the My Son World Heritage site. Identification of buried structures as well as unexploded mines was completed in 2001. A UNESCO-Italian Funds-In-Trust project (US$ 812,470) was approved by the Government of Italy in January 2002 in order to facilitate both the demining and restoration work on site. The implementation of this project is being co-ordinated by the World Heritage Centre, in co-operation with the UNESCO field offices in Bangkok and Hanoi.

XII.100 The Bureau expressed its appreciation to the authorities of Vietnam, the UNESCO Bangkok Office, the Lerici Foundation and the World Heritage Centre, for mobilizing the generous contribution of the Government of Italy to enhance the security, management, conservation and presentation of the mined and non-excavated areas of My Son World Heritage site. The Bureau requested the World Heritage Centre to report on the progress made in the implementation of this activity at its 27th session in April 2003.

The Committee is requested to take note of the decision of the Bureau (paragraphs XII 98-100). 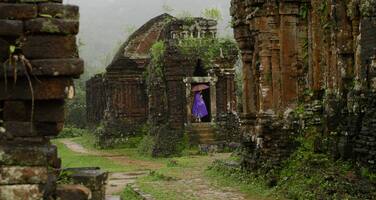