New information: As requested by the World Heritage Committee at its twenty-fourth session (Cairns, November – December 2000), a UNESCO-ICOMOS-Butrint Foundation mission was undertaken to the site.

The Bureau may wish to examine the findings and recommendations of the UNESCO-ICOMOS-Butrint Foundation mission at the time of its session and take appropriate decisions.

The twenty-fifth session of the Bureau requested the State Party to submit a report by 15 September 2001 on its proposal for the implementation of recommendations contained in the report of the joint mission UNESCO-ICOMOS-Butrint Foundation (19-24 April 2001). At the time of the preparation of this document, no information has been received from the State Party.

V.64       The Secretariat informed the Bureau of the joint mission of UNESCO-ICOMOS-Butrint Foundation to Albania that was undertaken from 19 to 25 April 2001 at the request of the World Heritage Committee to assess the implementation of the programme of corrective measures that was adopted at the time of the inscription on the List of World Heritage in Danger in 1997.

V.65       The mission concluded that very important measures had been taken by the Government of Albania in establishing the appropriate legal and institutional framework for the site. It noted, however, that there is still illegal construction taking place within the boundaries of the Park, that the site museum had not been re-installed as of yet and that the authority of the Park administration still needs to be strengthened. The mission concluded that the progress made to date needed to be consolidated and institutionalised by implementing the following actions:

V.66       The Bureau took note of the report of the joint UNESCO-ICOMOS-Butrint Foundation mission to Butrint. It commended the Government of Albania for the actions it had taken in response to the mission of October 1997, particularly the establishment of the Butrint National Park, the extension of the World Heritage site and the creation of the Butrint National Park Office. It endorsed the mission's conclusion that it is necessary to further strengthen and institutionalise the Park and its management structure and that particular attention should be given to regional co-ordination in order to prevent developments within and outside the Park that might affect the integrity of the site.

V.67       With regard to the World Heritage Fund Emergency Assistance, approved by the Committee in December 1997, the Bureau regretted that serious delays had occurred in its implementation. It requested the Government to take the necessary administrative measures and requested the Secretariat to work closely with the Government for the smooth completion of the assistance by the time of the twenty-sixth session of the Committee.

V.68       The Bureau requested the Secretariat to transmit the mission report to the Government of Albania for consideration and comments and requested the Government to submit a report by 15 September 2001 on its proposals for the implementation of its recommendations.

VIII.61 The Committee examined the state of conservation of the site and urged the State Party to submit a report on the progress made in the implementation of the recommendations made by the joint UNESCO-ICOMOS-Butrint Foundation mission by 1 February 2002, for examination at its twenty-sixth session (June 2002).

The Committee may wish to examine information from the State Party that may be available at the time of its session and take appropriate decisions and make recommendations for implementation by the State Party, ICOMOS, the Centre and the Butrint Foundation. 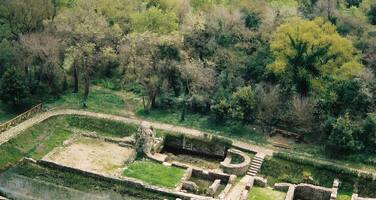