Summary of previous deliberations: The work on the Rey Chico festivities hall situated between the Alhambra and the Albaicín on the left bank of the Rio Darro had been halted and a UNESCO-ICOMOS mission was undertaken in November 1997.

In 1998, the Bureau thanked the national, regional and local authorities for the efforts and the results achieved in the conclusion of the matter concerning the new construction of the Rey Chico. However, the Bureau reminded the authorities of the need to apply the Convention and the Guidelines with regard to the management plan and the unicity of the site. Consequently, the Bureau forthwith requested the Spanish national authorities to establish without delay the Spain-UNESCO Scientific Committee and to convene it as soon as possible so that the measures necessary for the appropriate management of the site be identified and programmed.

New information: To date, the Secretariat has not received any positive information on the creation of the Spain-UNESCO Scientific Committee.

By letter dated 18 May 1999 the Patronato de la Alhambra y Generalife de la Junta de Andalucía called attention to the fact that various projects proposed in the foreseen revision of the General Urban Plan for Granada would have a negative impact on the site. Particular mention is made of a project of the Municipality of Granada to expand considerably the cemetery that is located near to the Alhambra.

The Bureau may wish to examine additional information that may be provided/available at the time of its session and take the appropriate decision thereupon.

At its twenty-third session, the Bureau took note that the revision of the Special Plan had begun and recommended that the extension of the cemetery respect the protection of the site.

In September 1999, the University of Grenada organized an international seminar on site management and invited the World Heritage Centre to participate.  This seminar provided the opportunity for the Patronate of the Alhambra to present to the public the preliminary work on the revision of the Special Plan for the monumental part of the site (Alhambra and Generalife).  This revision integrates the necessary liaison of the plan with the management plan of the city-centre of Grenada and the Special Plan for the Albayzin.   The three teams responsible for these plans are working together, and it is expected that the co-ordination of these three plans will finally become operational.

However, the monumental site is still at risk from the extension of the cemetery situated at the edge of the olive grove of Los Alijares and this, in spite of the recommendation made by the Bureau at its twenty-third session.

In the Albayzin, the Albayzin Foundation has begun implementation of an urban pilot project financed by the FEDER.  The major works originally foreseen have been abandoned in favour of activities better adapted to the area.  Only the construction of the Mosque adjacent to the Mirador de San Nicolas and the state of dilapidation of the Puerta Elvira area remain a cause for concern.  The restoration work on the altar piece of the Santa Isabel la Réal Monastery and the final work for the rehabilitation of the Monastery continue, and it will soon be authorized to open to the public.

«The Bureau congratulates the Spanish authorities for the progress made in the revision of the Special Plan for the monumental site and for the co-ordination of the different protection and management plans. It also congratulates the authorities for the ongoing work in the Albayzin and expresses its wish that the remaining problems be treated taking due consideration of the Convention and the nature of the area.

However, the Bureau remains concerned about the continuing threat to the monumental site due to the extension of the cemetery, and hopes that this threat will be rapidly resolved.  It requests the State Party to report to the Bureau on this matter before 15 April 2000. 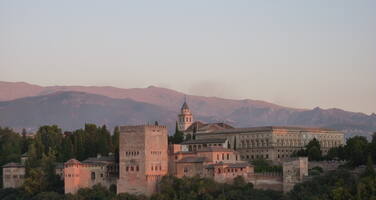