Depletion of the population of mountain gorillas

New information: In March 1999 eight tourists visiting the site to view mountain gorillas and four camp staff members were killed by rebel forces. Both the Director-General of UNESCO and the Chairperson of the Committee issued statements condemning the killings and calling for the restoration of security conditions that would enable visitors to enter this World Heritage site without fear and risk. The negative publicity surrounding this event appears to have greatly affected visitation to this site as well as to other parks in Uganda. As a result the income received by the site to protect the gorillas and their habitat has decreased. In the absence of a rapid recovery of tourism and the income it generates, the effectiveness of the protection of this site may decline.

The Bureau may wish to recommend that the State Party submit to the Centre, before 15 September 1999, a report on measures taken to enhance security conditions in this site and to ensure recovery of visitor numbers to pre-March 1999 levels. The Bureau may request the Centre and IUCN to submit their analysis of the report and recommendations to the consideration of the twenty-third extraordinary session of the Bureau in November 1999.

New information: At its twenty-third session, the Bureau recommended that the State Party submit to the Centre, before 15 September 1999, a report on measures taken to enhance security conditions in this site and to ensure the recovery of visitor numbers to pre-March 1999 levels.  So far, although no formal written response from the State Party has been received, an email report submitted by the Chief Executive Officer of the Uganda Wildlife Authority, who is also an IUCN Member, which notes the following:

A number of measures have been taken by the site-management to improve security, including: (a) the deployment of additional security personnel in and around the site; (b) joint guarding of tourist facilities by the rangers and the defence force (UPDF); (c) establishment of a mobile strike force that cordons off and searches any place suspected to be insecure ; (d) regular contact with security officers on the Uganda/DRC border to share security information and co-ordinate patrol operations; (e) opening an additional trail to improve accessibility of the joint forces near the border with the DRC; (f) improving radio communication links between security units and Bwindi site management; (g) regular briefing between the Uganda Park Authority Headquarters and the site; (h) training of relevant rangers for one month in anti-terrorism in Egypt; (i) increased publicity, nationally and internationally, of security conditions in the site by the Government; and (j) enlisting of local community support who share tourism benefits.  The report also mentions that some limited donations were received to purchase walkie-talkies, sleeping bags and a 4 wheel-drive vehicle.  Already, as a result of the measures taken, the number of visitors has increased from 83 in April to 256 in August 1999.

There is an urgent need to train park staff to appropriately handle any security threats that may arise, given that the site borders an area of instability.  Training is needed in terms of anti-terrorism preparedness, monitoring intelligence information and community relations.  Support is required to implement this training as well as to assist with the purchase of four wheel drive vehicles.

The Bureau recalled the insecurity situation prevailing in this site which resulted in the killing of eight tourists visiting the site to view mountain gorillas and four camp staff members in March 1999.  The Centre informed the Bureau that Bwindi Forest has also been impacted due to armed conflicts in the African Great Lakes Region, similar to the sites in the Democratic Republic of the Congo inscribed in the List of World Heritage in Danger.  Bwindi too needs special efforts of the Centre and IUCN in any campaigns to raise awareness of the needs of biodiversity conservation in times of armed conflict and civil unrest.  On the other hand, the Bureau learned that a letter from the Uganda Wildlife Authority dated 14 May 1999 indicated that Bwindi is returning to its normal operation and that tourism in the site is now open and conservation activities are going on.

Having considered the information at hand, the Bureau recommended that the State Party submit to the Centre, before 15 September 1999, a report on measures taken to enhance security conditions in this site and to ensure the recovery of visitor numbers to pre-March 1999 levels.  The Bureau requested the Centre and IUCN to submit their analysis of the report and recommendations to the consideration of the twenty-third extraordinary session of the Bureau in November 1999.

X.28 The Committee noted the decisions of the twenty-third extraordinary session of the Bureau as reflected in the Report of the Bureau session (Working Document WHC-99/CONF.209/6) included as Annex VIII to this report. Additional observations made during the Committee session are reflected below.

The Delegate of Australia thanked IUCN for the consultative process started, which could be a model for other State Parties. He also informed the Committee that the area of marine protection around Macquerie Island had been extended and now comprises 16 million ha, the world's largest highly protected marine zone.

The Delegate of Colombia informed the Committee that a visit by a delegation from the Ministry for Environment to Los Katios was recently carried out. The visit included areas that were previously not accessible. He emphasized that the proposal to grant collective land ownership over 100,000ha would be outside the Park in the buffer zone. He commented that his Government would be pleased to receive the visit of the monitoring mission to this site in 2000. The Colombian authorities have enhanced transboundary co-operation with Darien National Park (Panama) and strengthened the protected area system.

The Observer of the United States underlined his Government's role in safeguarding Galapagos Islands and congratulated the Government of Ecuador on progress made. He noted the landmark decision of the Galapagos Law and questioned whether it had been implemented, in particular concerning the forty-mile zone. The Secretariat informed the Committee that some threats related to illegal fishing have been reported. IUCN noted the implementation of this pioneering legislation is vital and specific regulations need to be developed and implemented as soon as possible. The Delegate of Ecuador provided information from the Ministry of Environment noting progress concerning control of introduced species and general improvements in relation to biodiversity conservation at the site. Concerning the control of the 40-mile zone, she stated that the law has not yet been implemented, but that the basis for the conservation and environmental control is there. She thanked the Committee for all its efforts to safeguard the Galapagos.

The Observer of Nepal expressed his gratitude for the international support for the important project on tourism carried out at Sagarmatha National Park. The Observer of the United Kingdom noted that it is a ground-breaking project.

The Delegate of Thailand noted the raised serious concerns raised by the Bureau regarding the management of this site, given the decline in numbers of the Arabian Oryx and the fact that the boundary marking and management planning is long overdue for completion. He recalled that the Committee inscribed the site without legislation and management plan in December 1994. He highlighted the Operational Guidelines in relation to the deletion of properties. The Delegate of Benin noted that rigour was not always applied in the past years and that a number of sites would not have been accepted if they were presented today. Concerning the question of deletion, a site would be put first on the List of World Heritage in Danger. The Delegate of Thailand made it clear that he had not proposed the deletion of the site from the World Heritage List and that he was totally aware of the modalities in that respect. The Observer of the United Kingdom noted that similar problems concerned a number of sites and that these issues would certainly be dealt with by the periodic reporting process. IUCN pointed out that it had consistently raised concerns about this site. IUCN noted that legislation does not have effect if there is not sufficient resources for its implementation. The Chairperson reminded the Committee members about the rarity of Arab natural sites on the List. In concluding, the Chairperson thanked the Committee for the debate and noted that awareness needs to be raised in countries about the World Heritage Convention, its obligations and World Heritage values to be preserved for future generations, in particular among decision-makers. He thanked the Delegate of Thailand for his statement and encouraged the Committee to further reflect on how to enhance the protection of World Heritage sites.

The Observer of Russia requested that the information provided during the adoption of the report of the twenty-third extraordinary session of the Bureau on this site be included in the Bureau report.

“The Bureau requests IUCN and the Centre to verify, with the Ugandan authorities, their needs for support for purchase of vehicles and staff training and if confirmed as reported above, facilitate efforts of the Ugandan authorities to obtain financial support from suitable sources including the World Heritage Fund. The Bureau requests that the Centre and IUCN report on measures taken to support site management at the twenty-fourth ordinary session of the Bureau in mid-2000.” 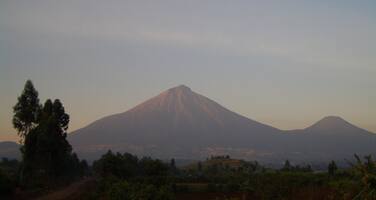