Factors affecting the property in 1996*

International Assistance: requests for the property until 1996

Missions to the property until 1996**

Conservation issues presented to the World Heritage Committee in 1996

The site covers an area of 720 hectares and a buffer zone of 30 square kilometers. A photogrammetric survey was completed in 1993 by M.T. Survey of Finland. Monitoring methods have been devised to assess potential threats to the monuments, thanks to a special project funded by the British O.D.A. Subsequently, the rate of wall collapses declined substantially. The monitoring of the site is carried out by a team headed by a qualified surveyor. Key indicators have been devised to measure the state of conservation. A site management plan was then produced in 1994, by the full time conservation team, comprising a surveyor, a photogrammetrist, a monuments inspector, an architectural conservator and an in situ archaeologist.

The site is managed by National Museums and Monuments of Zimbabwe (NMMZ), a parastatal entity which depends upon the Minister of Home Affairs. The site has benefitted from emergency assistance from the World Heritage Fund which provided for the installation of a fire prevention system. As a result of a special Donors Conference held in 1992, the site has also secured surveying equipment(Japanese Government): total survey (Government of Finland) and technical expertise (UNESCO and British O.D.A.).

"The Bureau commends the Zimbabwe authorities for their efforts of conservation and the professional expertise which is available in situ. It recommends that the World Heritage Centre be kept informed of on-going activities."

Decisions adopted by the Committee in 1996

Considerable progress was reported in the preservation programme for this site managed by National Museums and Monuments of Zimbabwe (NMMZ). A site management plan is in place. As a result of a special Donors Conference held in 1992, the site has also secured surveying equipment. A total survey has been undertaken.

The Bureau commended the Zimbabwe authorities for their efforts of conservation and the professional expertise which is available in situ. It recommended that the World Heritage Committee be kept informed of on-going activities. 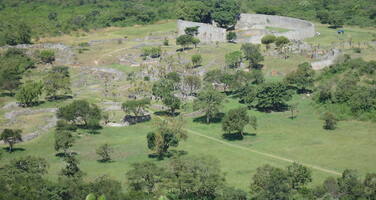