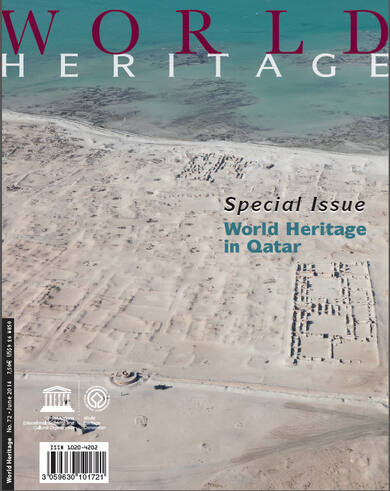 Each year, the special issue of World Heritage coinciding with the annual World Heritage Committee session gives us the opportunity to focus on the heritage of a particular country or region. This year the 38th session of the Committee is hosted by the State of Qatar so we are taking a closer look at the cultural and natural heritage of this country, which deserves to be better known.

While Qatar adopted the World Heritage Convention in 1984, its first site was inscribed on the World Heritage List in 2013. Al Zubarah Archaeological Site is an excellent example of a fortified town linked to other settlements for the pearl trade, and was a key point in the development of urban centres in the 18th and 19th centuries in the Gulf region. Several articles present the history of this remarkable site and the archaeological works undertaken to shed light on its development and significance to the region.

In addition, we cover the natural site on Qatar’s Tentative List, Khor Al-Adaid, known as the Inland Sea. This breathtakingly beautiful site is a large tidal embayment with a lagoonal structure. We also discover the archaeological heritage of pre-Islamic Qatar, and the joint Qatari-German research project involving archaeological surveys and excavations in the south of the country. Further articles present mysterious rock carvings, including ‘board games’; the challenges of heritage preservation in the face of urban development; and the Old Palace of Doha, currently under restoration to become the central point of the new National Museum of Qatar.

Qatar is committed to developing its rich cultural life through many aspects, whether art, music, festivals, activities and especially institutions, including museums. In this way, culture becomes not only an aspect of the identity of the Qatari people, but a powerful vector for sustainable economic growth and an effective means to create ties with other peoples and cultures, uniting and educating along the way.

We are pleased to publish an interview with H.E. Sheikha Al Mayassa Bint Hamad Bin Khalifa Al Thani, Chair of the World Heritage Committee and Chair of Qatar Museums Authority, where she describes the critical role of culture as a driver of education and the economy in her country.

I would like to thank the authorities of the State of Qatar for generously hosting the 38th session of the World Heritage Committee, which is sure to be an effective and meaningful contribution to preserving our World Heritage.