Concern for the State of conservation of the Church of St. Cyril, located near Saint-Sophia Cathedral in Kiev, Ukraine

The UNESCO World Heritage Centre and the UNESCO Office in New York have received a large number of letters from individuals who are concerned about the state of conservation of the Church of St. Cyril - located near Saint-Sophia Cathedral in Kiev, Ukraine- and in particular about planned reconstruction works in its interior.

Please note that the Church of St. Cyril is not included in the nomination file of the World Heritage property of "Kiev: Saint-Sophia Cathedral and Related Monastic Buildings, Kiev-Pechersk Lavra", which was inscribed on the World Heritage List in 1990, and extended in 2005.

In a letter addressed to the Permanent Delegation of Ukraine to UNESCO on 31 January 2007, the World Heritage Centre invited the relevant Ukrainian authorities to provide further information on this reconstruction project. 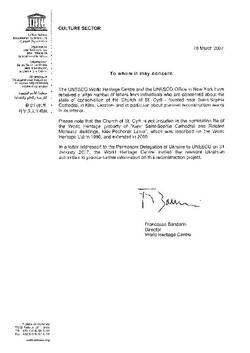