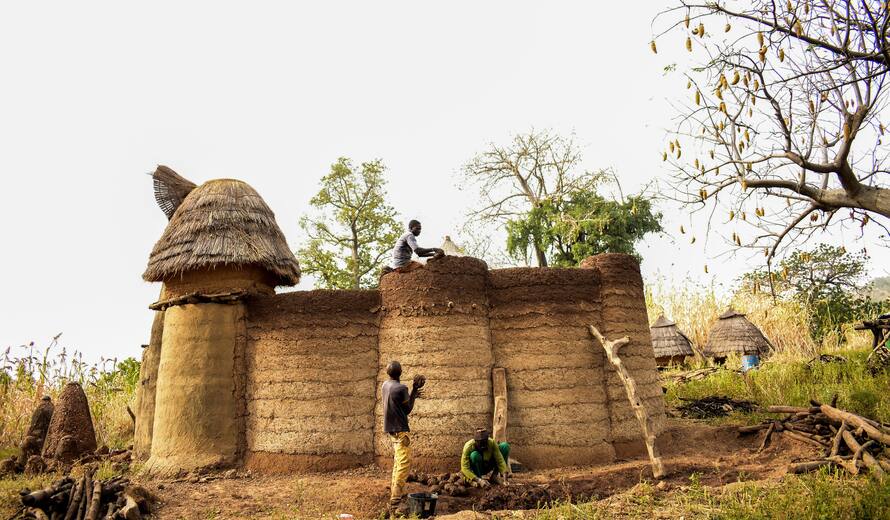 After heavy rains hit northeastern Togo in August 2018, UNESCO led an emergency mission to the World Heritage Property of Koutammakou, to assess the scale of the damage including to some of the world’s rarest architectural structures – the two-storey mud “tower” houses known as Takienta.

The mission, which comprised three international and four national experts, visited the villages of Bassamba, Warengo, Pimini and Nadoba and held consultations with the local Batammariba people, the Prefect of Kéran, the Minister of Culture of Togo and the National Meteorological Service.

Findings from the mission detailed the partial or complete collapse of the Takienta houses, the loss of food and livestock and the degradation of farmland. Locals also suffered considerable loss to their intangible cultural heritage, as damaged Takienta housed altars in honour of the Batammariba’s male ancestors.

Built by the Batammariba or “those who model the earth”, the Takienta with their conical thatched and flat roofs are a striking feature of the northeastern landscape of Koutammakou, a World Heritage property since 2004.

This is significant for the Batammariba, as the Takienta form part of an evolving living landscape, symbolic of the very soul of the community. They serve as temples for gods and ancestors and are central to various initiation and funeral ceremonies.

Batchien Antoine, chief of the village of Bassamba, said: "This damage affected my dignity, my person, my soul. If a Takienta is destroyed, it violates a central element in our life, affecting our spiritual universe.”

With so many of the “mother houses” (dwellings in which initiation rites take place) badly damaged or at risk of collapse, the Batammariba raised concerns about holding initiation rites planned for February 2019.

Local masons and artisans have been engaged in a community effort to restore the “mother houses” in the villages of Koutougou, Nadoba and Warengo following recommendations for urgent measures by UNESCO’s mission, and in time for the initiation ceremonies.

Additional recommendations include an emergency response plan for an inventory and map with locations of the Takienta, or the installation of an early warning system in collaboration with the national meteorological services.

The mission to Togo took place from 19 October to 24 October 2018 and was possible thanks to support by UNESCO’s Heritage Emergency Fund.