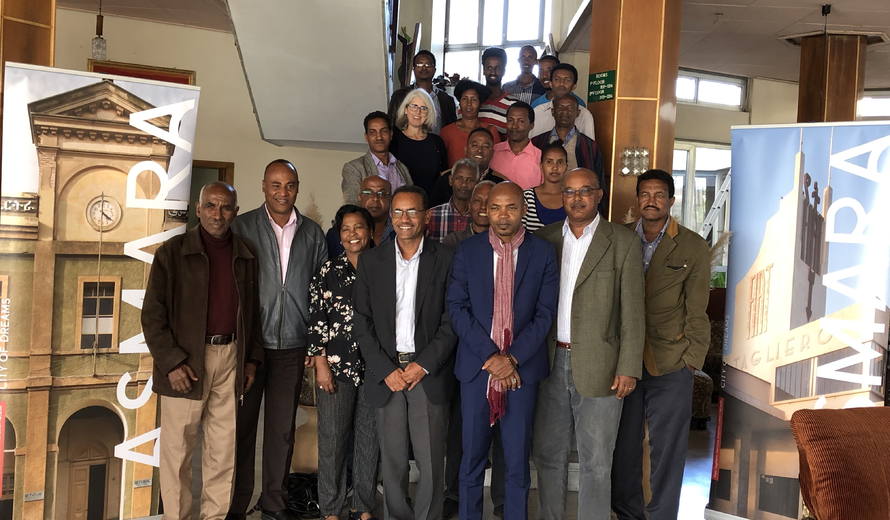 A new UNESCO project funded by the Government of The Netherlands is supporting Eritrea’s efforts to strengthen the conservation and management of Asmara: A Modernist African City World Heritage property using the UNESCO Historic Urban Landscape Approach.

Eritrea’s capital city Asmara was inscribed on the UNESCO World Heritage List in 2017 as “an exceptional example of early modernist urbanism from the beginning of the 20th century and its adaptation to an African context. It represents important and early developmental phases of town planning and architectural modernism that are presently still fully reflected in its layout, urban character and architecture.”

From 3 to 7 December 2018, the State Party of Eritrea organized a capacity building workshop in Asmara on applying the UNESCO 2011 Historic Urban Landscape Recommendation (HUL) to the Conservation Master Plan for Asmara: A Modernist African City World Heritage property. Twenty participants including Eritrean architects and urban experts, local stakeholders and decision-makers attended the workshop.

The workshop is the first of two capacity building workshops that are part of the Netherlands Funds-in-Trust to UNESCO Project “Conservation of Asmara: the Modernist City of Africa, Eritrea,” which is being managed by the Asmara Heritage Project (the site management authority for Eritrea’s first World Heritage site) in partnership with the UNESCO Regional Office for Eastern Africa. The first workshop aims to provide capacity building on the HUL Recommendation, its objectives and tools for the Asmara Heritage Project.

At this workshop, international expert, Dr Muhammad, provided an overview of the history of urban planning as well as case studies of urban planning at cities in Africa. After an in depth overview of the HUL recommendation, Dr. Muhammad led the participants on a reflection of the application of HUL to the Eritrean context. Throughout the workshop, the importance of close community participation and involvement in the management process was highlighted as the key to sustainable management of the city.

Dr. Muhammad also encouraged the participants to develop a Local Economic Development Plan for Asmara in order to ensure small businesses and local employment can thrive, as well as anUrban Development Funding systemin order to sustain financial resources for the city.

Lastly, Dr. Muhammad used the holistic vision, advocated by the HUL approach, to provide technical advice to the Asmara Heritage Project and the Department of Public Works Development in order to develop recommendations and a roadmap for the further implementation of the World Heritage Committee Decision 41COM 8B.11 for Asmara World Heritage property.

The second workshop of the project will be organized in early 2019, after which the site management authority will work on finalizing the Urban Conservation Master Plan and the Planning Norms and Technical Regulations for Asmara World Heritage site. The second workshop will also reinforce the capacities of participants to develop strategies for ensuring a steady influx of financial resources for the site.

Lastly, the project foresees the organization of a special public event in Asmara on 5 May 2019 in celebration of African World Heritage Day, which will raise awareness of the World Heritage values in Asmara and mobilize the local community to join in the conservation efforts.