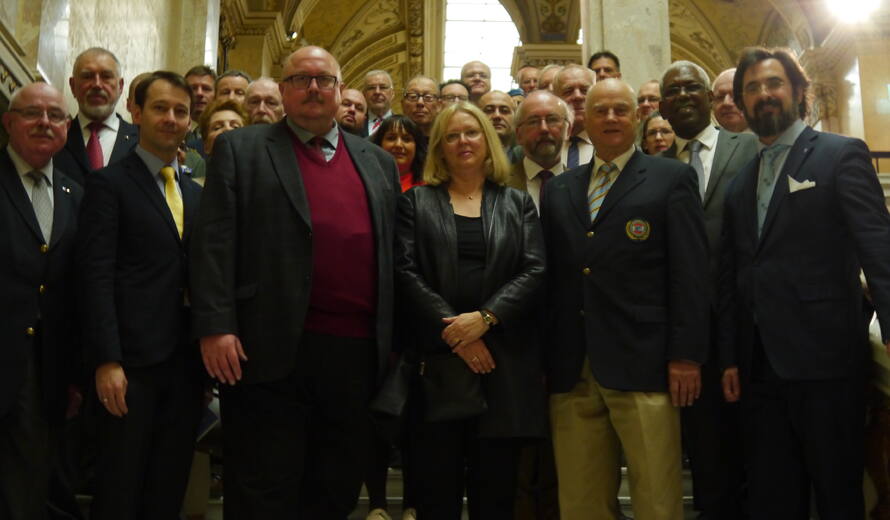 Cultural heritage has been targeted in attacks or suffered collateral damage in armed conflict. Recent destruction in World Heritage sites such as Aleppo, Syria or Hatra, Iraq brought this this into the background and alerted the international community.  One way to mitigate damage is for armed forces to be aware fully of cultural heritage sites and monuments, archaeological sites, and museums in the course of their military operations and to receive special training in cultural heritage protection.

During the Blue-Helmet-Blue-Shield Forum Austria 2017 held at the Kunsthistorische Museum, Vienna, on 3 March 2017, the focus was “Best Practice on Peace Keeping and Cultural Property Protection.” The event was attended by experts from ICOM, UNIFIL, NATO and Blue Shield. Mechtild Rössler, Director of the Division of Heritage of UNESCO, highlighted that “security forces, military personnel, police and customs officials, all have tremendously important roles to play in heritage protection and need to coordinate closely with cultural institutions to this end”.  She shared with the participants legal frameworks and practical tools, including UNESCO’s experiences on the Protection of Cultural Property in the Event of Armed Conflict under the 1954 Hague Convention and its two Protocols, as well as the prevention of illicit trafficking of cultural objects under the  UNESCO 1970 Convention.   UNESCO’s recent publication, Military Manual on the Protection of Cultural Property, which is the first of its kind in this field, was also presented.  The Manual addresses a variety of subjects, including preparatory measures, measures designed to increase respect for cultural property, precautionary procedures in the event of launching attacks, the protection of cultural property in occupied territory, and penal measures.

In addition to monuments and sites, museums and collections need special protection during conflict, particularly with regard to looting and illicit trafficking.   Ms .Rössler elaborated on UNESCO training tools and workshops for Museums in Emergency Situations and Conflicts, and presented UNESCO 2015 Recommendation concerning the Protection and Promotion of Museums and Collections, their Diversity and their Role in Society.

Participants including from other agencies (UNIFIL) and universities enumerated ways to reinforce the protection of heritage as an integral part of sustainable strategies to foster development, peace and security, as well as the role of education and outreach in promoting mutual understanding and respect. The Seminar was hosted by the Association of Austrian Peacekeepers.