UNESCO Santiago presents map of the World Heritage of Chile 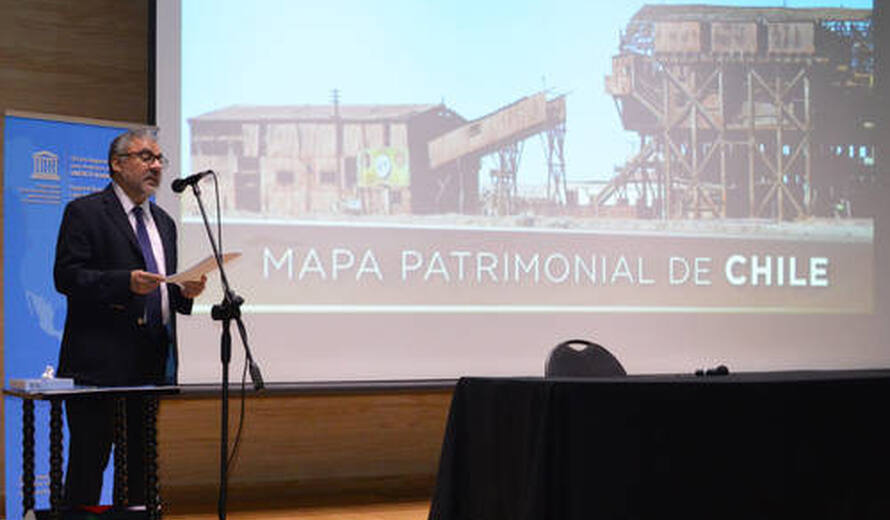 In addition to Chile's World Heritage sites, the map includes 17 sites that the Chilean government has submitted to the Tentative List to be potentially named World Heritage in future. The map will soon be available for free.

The map that UNESCO has launched to commemorate its 71st anniversary seeks to raise awareness of the diversity and location of Chile’s different types of heritage. The ceremony was held on Thursday, 17 November, at the Violeta Parra Museum in the nation’s capital.

The World Heritage Map of Chile was presented by Jorge Sequeira, Director of the Regional Bureau of Education for Latin America and the Caribbean (OREALC/UNESCO Santiago). It includes material about Chile’s six World Heritage sites, the list of 17 sites in the Tentative List, its 30 Living Human Treasures, and the Bailes Chinos, the only Chilean example of Intangible Cultural Heritage of Humanity included in the Representative List. The map also includes the Chilean records registered in the United Nations’ Memory of the World programme.

The ceremony showcased Chile’s heritage contributions, which represent exceptional universal value in terms of the world’s natural and cultural diversity. UNESCO has had a fruitful relationship with the Chilean State in this task, working in the field of heritage and culture.

As a country, Chile is particularly committed to UNESCO programmes and has successfully implemented the Living Human Treasures and Artistic Education Week initiatives, both of which have been conducted with enthusiasm each year in the South American nation.

At the ceremony, Jorge Sequeira highlighted how in the area of World Heritage, “UNESCO has worked closely with national authorities in programmes to support the conservation of sites such as Humberstone and Santa Laura, affected by the 2012 earthquake, and helping with reviewing and protecting the heritage site at Valparaíso port, as well as a number of other initiatives.”

Another speaker at the event was Ángel Cabezas, Director of Chile’s National Department of Libraries, Archives, and Museums (DIBAM). In his speech, Cabezas highlighted that heritage sites are living things, not just cultural sites but rather places where people live: “As stated in the convention on natural and cultural heritage, as well as new conventions on cultural diversity and material heritage that Chile has signed, the idea is to think about a place with a past, with history, with people, and with identity.” He added that heritage is not only an inheritance, it is also what we use to build our future. It is therefore “important that this map includes not only sites already listed as World Heritage, but also the candidate sites that Chile is proposing to the world,” he said.

Intangible Heritage
The event featured journalist Diana Torres, who spoke about her work documenting the Bailes Chinos, the only Chilean item listed as Intangible Cultural Heritage of Humanity in the Representative List so far, which is included on the map launched today by UNESCO. The journalist said that Chileans “should know about this cultural expression not only for the international category in which it is now registered, but also because it belongs to us.”

The Bailes Chinos groups are brotherhoods of musicians who express their faith through music, dance and singing to celebrate commemorative festivals. This cultural expression, practiced mainly in Central and North-Central Chile, has five unique styles each named after the valley where it originates. Organized mainly by men in rural areas, the dances feature leaps into the air and leg bends to the rhythm of isometric instrumental music played on drums and flutes of pre-Columbian origin.