Istanbul, Turkey, 15 July—The World Heritage Committee inscribed five new sites on the World Heritage List this afternoon. One of the new sites, a transboundary property, is located in Bosnia and Herzegovina, Croatia, Montenegro, Serbia, the others are in Greece, Spain, Turkey and the United Kingdom.

The new sites, in the order of their inscription, are:

Stećci – Medieval Tombstones Graveyards (Bosnia and Herzegovina, Croatia, Montenegro, Serbia) – This serial property combines 30 sites, located in Bosnia and Herzegovina, western Serbia, western Montenegro and central and southern Croatia, representing these cemeteries and regionally distinctive medieval tombstones, or stećci. The cemeteries, which date from the 12th to 16th centuries CE, are laid out in rows, as was the common custom in Europe from the Middle Ages. The stećci are mostly carved from limestone. They feature a wide range of decorative motifs and inscriptions that represent iconographic continuities within medieval Europe as well as locally distinctive traditions.

Archaeological Site of Philippi (Greece) – The remains of this walled city lie at the foot of an acropolis in the present-day region of Eastern Macedonia and Thrace, on the ancient route linking Europe and Asia, the Via Egnatia. Founded in 356 BC by the Macedonian King Philip II, the city developed as a “small Rome” with the establishment of the Roman Empire in the decades following the Battle of Philippi, in 42 BCE. The Hellenistic theatre and funerary heroon (temple) were supplemented with Roman buildings such as the forum. Later the city became a centre of the Christian faith following the visit of the Apostle Paul in 49-50 CE. The remains of its basilicas constitute an exceptional testimony to the early establishment of Christianity.

Antequera Dolmens Site (Spain) – Located at the heart of Andalusia in southern Spain, the site comprises three megalithic monuments: the Menga and Viera dolmens and the Tolos of El Romeral, and two natural monuments: the Peña de los Enamorados and El Torcal mountainous formations, which are landmarks within the property. Built during the Neolithic and Bronze Age out of large stone blocks, these monuments form chambers with lintelled roofs or false cupolas. These three tombs buried beneath their original earth tumuli, are one of the most remarkable architectural works of European prehistory and one of the most important examples of European Megalithism.

Archaeological Site of Ani (Turkey) – This site is located on a secluded plateau of northeast Turkey overlooking a ravine that forms a natural border with Armenia. This medieval city combines residential, religious and military structures, characteristic of a medieval urbanism built up over the centuries by Christian and then Muslim dynasties. The city flourished in the 10th and 11th centuries CE when it became the capital of the medieval Armenian kingdom of the Bagratides and profited from control of one branch of the Silk Road. Later, under Byzantine, Seljuk, and Georgian sovereignty, it maintained its status as an important crossroads for merchant caravans. The Mongol invasion and a devastating earthquake in 1319 marked the beginning of the city’s decline. The site presents a comprehensive overview of the evolution of medieval architecture through examples of almost all the different architectural innovations of the region between the 7th and 13th centuries CE.

Gorham's Cave Complex (United Kingdom) – The steep limestone cliffs on the eastern side of the Rock of Gibraltar contain four caves with archaeological and paleontological deposits that provide evidence of Neanderthal occupation over a span of more than 125,000 years. This exceptional testimony to the cultural traditions of the Neanderthals is seen notably in evidence of the hunting of birds and marine animals for food, the use of feathers for ornamentation and the presence of abstract rock engravings. Scientific research on these sites has already contributed substantially to debates about Neanderthal and human evolution. 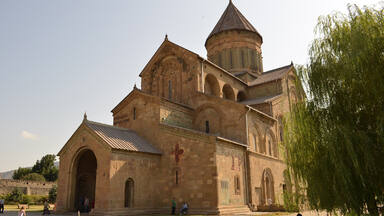 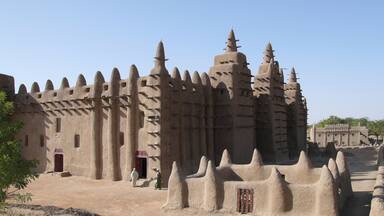 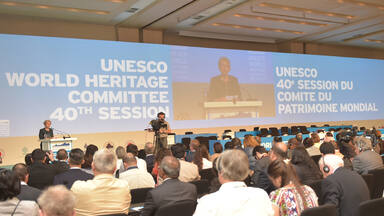