On November 13, 2015, a guard of the Congolese Institute for the Conservation of Nature (ICCN) was the victim of an attack that cost him his life at the Okapi Wildlife Reserve, a UNESCO World Heritage site in the Democratic Republic of Congo (DRC). He was deployed to a post at Zunguluka, one of the entrances to the park, when he was targeted by a group of armed militiamen (Mai Mai).

"I strongly condemn this murder and I express my deepest condolences to the family and to those responsible for the Congolese Institute for the Conservation of Nature. I am deeply concerned at the upsurge of violence at the World Heritage sites in the Democratic Republic of the Congo, and I want to pay special tribute to the immense courage of the guards that ensure the protection of World Heritage sites in what can be extremely difficult and dangerous situations. This heritage belongs to all mankind, and the safety of those who have the mission to protect it must be ensured. We remain deeply concerned by the threats against the ICCN staff and their families at the Okapi Wildlife Reserve," stated the Director-General.

Insecurity is a serious factor affecting all World Heritage properties of the Democratic Republic of Congo. This situation highlights the need to implement the Kinshasa Declaration signed on 14 January 2011 in which the Congolese government undertakes, among other commitments, to secure World Heritage properties. The record for 2015 alone is already too heavy in terms of loss of life, as dozens of guards and civilians have been killed in Garamba National Park, Virunga National Park and now Okapi Wildlife Reserve. UNESCO condemns these crimes and hope that those responsible will be arrested and brought to justice for the crimes committed.

Furthermore, UNESCO has sought the support of the Mission of the United Nations Organization Stabilization Mission in the Democratic Republic of Congo (MONUSCO), and that of the international community to support the teams of the site and to protect people living in the Reserve. The Armed Forces of the DRC (FARDC) have come to the aid of Reserve but they need reinforcement to secure the populations and ICCN staff in the property and its periphery. Action must be taken quickly to avoid a recurrence of an attack like the one of 2012. 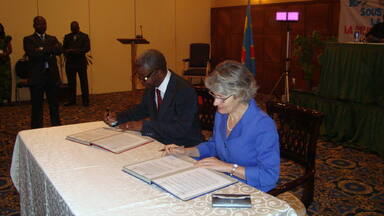