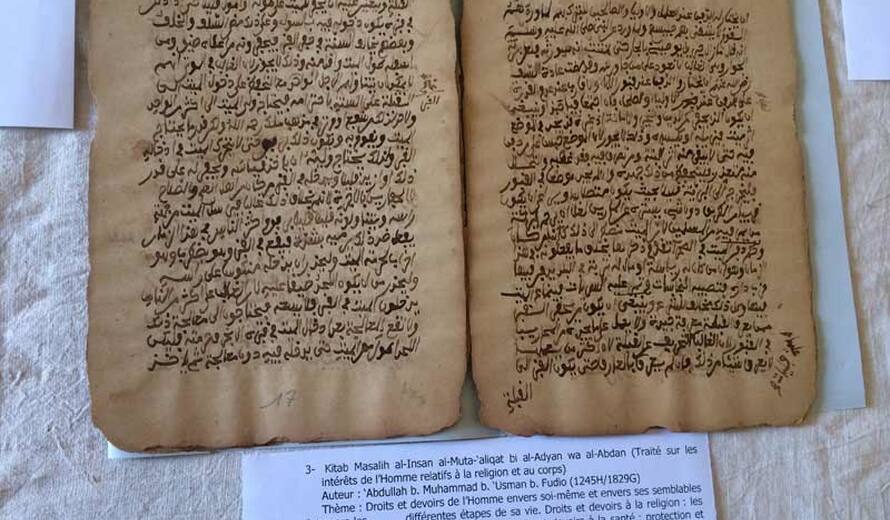 A manuscript from the collection in Mali. © UNESCO / Lazare Eloundou-Assomo
Storage conditions of ancient manuscripts smuggled out of Timbuktu to Bamako in 2012 must be improved rapidly to avoid decay, concluded participants at an international conference, held from 28 to 30 January in the national capital. They also called for the adoption of an emergency plan to preserve the manuscripts in the long-term.


The conference was attended by academics; representatives of cultural and religious institutions; as well as local communities; political leaders, historians and researchers. They stressed the need to involve all stakeholders, notably the families that own the private libraries of Timbuktu, in order to examine thoroughly the state of this documentary heritage and reinforce conservation measures. Participants identified two particularly urgent priorities: the provision of appropriate boxes for the manuscripts, and the documents’ digitization. They called on authorities to grant legal and institutional recognition to this heritage.

The document adopted at the end of the conference also recommends the renovation of the Ahmed Baba Institute of Higher Learning and Islamic Research and of the private libraries in which the manuscripts were originally kept to prepare for their return. It also calls for more resources to be allocated to the fight against illicit trade; and facilitating national and international researchers’ access to the manuscripts.

The conference—Ancient Manuscripts Facing Modern Day Challenges—was organized by UNESCO’s Office in Bamako, Mali’s Ministry of Higher Education and Scientific Research and the Ahmed Baba Institute of Higher Learning and Islamic Research in partnership with the Malian Ministry of Culture, Crafts and Tourism

Cultural heritage, including ancient manuscripts, suffered severe damage during the occupation of northern parts of Mali by armed groups in 2012 and 2013. The insurgents burned or stole 4,203 manuscripts held at the Ahmed Baba Institute. Nonetheless, the local population was able to save 90% of Timbuktu’s ancient manuscripts, with the help of the non-governmental heritage organization, SAVAMA-DCI, which was a partner of the conference.

The conference was supported by Norway with additional contributions from the MINUSMA, Switzerland, the European Union, the United Kingdom and France.