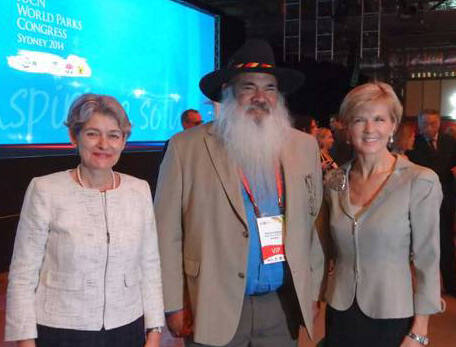 Sydney, 13 November - UNESCO Director-General Irina Bokova today called for a global commitment to “restore, revitalize and safeguard one of the planet’s most precious resources: protected areas”, at the opening session of the World Parks Congress, in Sydney, Australia.

The Congress is organized by the International Union for the Conservation for Nature (IUCN), one of the advisory bodies to UNESCO’s World Heritage Committee. It takes place every ten years and is considered the world’s most influential gathering of people involved in protected area management.

This year’s edition (12-19 November) focused on the theme “Parks, People, Planet: Inspiring solutions”,  and emphasized the fundamental role and knowledge of indigenous people in the management of these sites.

The first speaker at the opening session was Patrick Dodson, representative of Australia’s Indigenous Peoples, who reminded participants of the “need to understand the connectivity of things”.  Other speakers included the Presidents of the Pacific island Republics of Palau and Kiribati, Tommy Remengesau  and Anote Tong, the Prime Minister of the Cook Islands, Henry Puna,  Australia’s Foreign Affairs Minister Julie Bishop,  UN Under-Secretary General and Executive Director of the United Nations Environment Program (UNEP) Achim Steiner, and Sally Jewell, Secretary, US Department of the Interior.

“protected areas of land are an important way to safeguard the global environment from some of the gravest threats we face,” and make a major contribution to poverty reduction and inclusive development”.

Taking the floor, the Director-General reminded that “protected areas of land are an important way to safeguard the global environment from some of the gravest threats we face,” and make a major contribution to poverty reduction and inclusive development”.

Ms Bokova highlighted the part played by UNESCO’s World Heritage sites and the  global network of Biosphere Reserves in conserving protected areas. “In all, there are some 2,000 UNESCO protected sites across the world,” she told the Congress. “These span all continents, in almost every single country, covering millions of square kilometres of unique ecosystems.”

The Director-General also underscored that long-term conservation required the engagement of young people and, to this end, stressed the importance the Organization attaches to education for sustainable development,

On the margins of the Parks Congress, the Director-General met with Environment Minister Greg Hunt and the Minister of Foreign Affairs Julie Bishop. Both stressed that the Government was fully committed to meeting the concerns of the World Heritage Committee regarding the conservation of the Great Barrier Reef and outlined measures taken to respond to these, in the aim of turning the management of the reef into a model of best practice, as it had been for decades. The Director-General indicated that she was encouraged by the measures taken, and recommended continued strong leadership by the national government, dialogue with all stakeholders and focus on preventing, not offsetting damage, in order for the site to maintain outstanding universal value.