A massive earthquake and powerful typhoon Haiyan (Yolanda) successively struck central Philippines in October and early November 2013, causing catastrophic destruction and human loss. The UNESCO World Heritage Centre has expressed its deepest sympathy to the Government and people of the Philippines for their tragic losses, and conveyed its commitment to support their recovery efforts.

Detailed information has yet to be gathered, and immediate humanitarian concerns are addressed first. It has been reported, however, that two churches on the Tentative List of the Philippines (sites yet to be proposed for inscription on the World Heritage List) have been damaged. The Church Complex of San Pedro Apostol (Loboc, Bohol) of the Baroque Churches of the Philippines extension and the Church of Our Lady of Immaculate Conception (Baclayon, Bohol), were affected by the Bohol earthquake on 15 November 2013, and the Guiuan Church of La Purisima Concepcion, which is identified as one of the National Cultural Treasures of the Philippines, was severely damaged by the typhoon. No damage to existing World Heritage sites have been reported thus far.

UNESCO, together with ICCROM, is preparing to send a joint expert mission from 2 to 12 December 2013 to Manila and Central Visaya to assist the Philippines in assessing the situation and damage caused by the two disasters, to identify immediate needs and emergency safeguarding measures, as well as medium term interventions that would be needed for rehabilitation and recovery. The mission will consist of three experts – one on immovable heritage with a special focus on structural consolidation, one on museums and collections, and one on intangible heritage and psycho-social impacts. 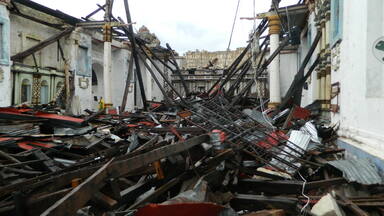