Ensemble of the Ferapontov Monastery

Ensemble of the Ferapontov Monastery

The Ferapontov Monastery, in the Vologda region in northern Russia, is an exceptionally well-preserved and complete example of a Russian Orthodox monastic complex of the 15th-17th centuries, a period of great significance in the development of the unified Russian state and its culture. The architecture of the monastery is outstanding in its inventiveness and purity. The interior is graced by the magnificent wall paintings of Dionisy, the greatest Russian artist of the end of the 15th century. 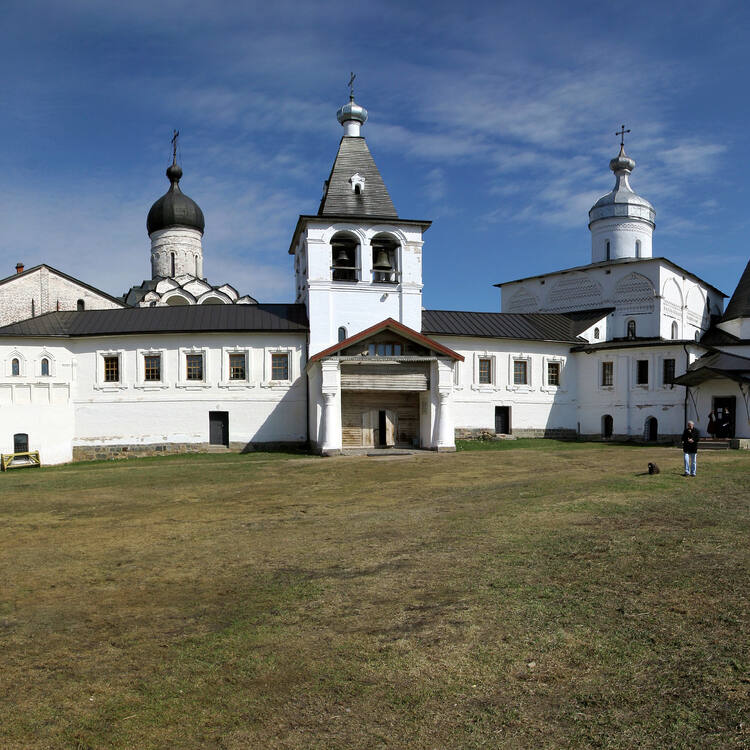 The Ensemble of Ferrapontov Monastery is situated in the Vologda region, in the north-western part of the Russian Federation on a small hill, between Borodaevskoe and Paskoe lakes, 120 km northwest of the city of Vologda.

The Moscow monk Ferrapont founded the monastery in 1398. The Ensemble of the Monastery was formed in the 15th-17th centuries. The core of the Ensemble is the Cathedral of the Nativity of the Virgin (1490), which is especially remarkable among the six surviving buildings of the Monastery. The others are the Church of the Annunciation, with a refectory chamber, the Treasury Chamber, the St. Martinian Church, the Churches of Epiphany and St. Pherapont above the Holy Gate, and the Bell Tower. In the 19th century the monastery territory was enclosed with a stone fence.

The history of Ferrapontov Monastery was linked with important events at some crucial points during the conformation of the centralized Russian state, such as the approval authority of the first "Emperor of All Russia" Ivan III, the reign of the first Russian tsar Ivan IV and the exile of Patriarch Nikon. In the 15th-16th centuries, Ferrapontov Monastery became a major cultural and ideological centre of the region, and was one of the main monasteries that considerably influenced the policy of Muscovy.

The architecture of the monastery, a remarkable example of the Rostov architectural style, is outstanding in its inventiveness and purity. The buildings of the monastery retained all the characteristic features and interior decoration. The Ensemble of the Ferrapontov Monastery is also a vivid example of the harmonious unity with the natural surrounding landscape that has changed little from the 17th century, emphasizing the unique spiritual system of northern monks, while at the same time revealing features of economic structure of northern peasantry.

The murals of the Cathedral of the Nativity of the Virgin have a special significance for Russian culture and other cultures worldwide. The murals of the Cathedral are the only paintings of the greatest Russian master Dionisy the Wise, which have been entirely preserved to this day in their original form. The Ensemble of the Ferrapontov Monastery, with the most valuable and completely preserved frescos of Dionisy, is a unique example of the integrity and unity of the Russian style of the northern monastery ensemble of the 15th-17th centuries.

Criterion (i): The wall paintings of Dionisy in the Cathedral of the Nativity of the Virgin at Ferrapontov Monastery are the highest expression of Russian mural art in the 15th-16th centuries.

Criterion (iv): The complex of Ferrapontov Monastery is the purest and most complete example of an Orthodox monastic community from the 15th-17th centuries, a crucial period in the cultural and spiritual development of Russia.

The inscribed property encompasses 2.10 ha, with a buffer zone of 20 ha and contains all the attributes that convey its Outstanding Universal Value. The integrity of the Ensemble of Ferrapontov Monastery and the good conservation of all its attributes are ensured by the boundaries of the property, which have remained unchanged and are clearly delineated by a the stone wall that surrounds all the architectural monuments and constructions of the Monastery. None of the attributes are threatened by contemporary development, deterioration or neglect.

The landscape around the monastery has remained almost unchanged for centuries, and has preserved its harmonious unity. Thanks to its location and compactness, the expressive silhouette of the monastery can easily be viewed from different directions, and all natural and anthropogenic impacts on the property have been avoided.

The Ensemble, erected in the 15th-17th centuries, has preserved a high level of authenticity in terms of its original layout, form, materials and techniques, its design, as well as its old architectural appearance, notably with regard to the interiors. Given its good preservation, the Monastery has not required large-scale reconstruction. Certain original architectural forms and structures were reconstructed on the basis of scientific studies and using traditional materials: large size brick stones for walls, wood for joints, fillings and for roof constructions. There are no modern buildings or constructions on the territory of the monastery.

Conservation works on the wall paintings have been especially commendable, being restricted to consolidation and cleaning. The authenticity of the frescos by Dionisy is determined on the basis of the absence of any interference in structure. Unique methods of conservation of the layers of the cathedral’s paintings ensured that there would be only negligible interferences with the artist’s paintings and no violation of their structure or aesthetic perception.

Today, the monastery houses the state museum. However, changes in the authenticity of function are part of the history of the property, and the addition of the museum plays an indispensable role in the protection of the authenticity of the ensemble. The Russian Orthodox Church uses the Churches of St. Pherapont and St. Epiphany as parish churches, and services are also foreseen at the Church of St. Martinian.

According to the Decree of the President of the Russian Federation of 02.04.1997, No. 275, the Ensemble of the Ferrapontov Monastery is declared as a monument of history and culture of federal significance. The Museum of the Frescoes of Dionisy in the Ferrapontov Monastery is a branch of the Kirillo-Belozersky historical architectural and art museum reserve. Since 1998, the Ministry of Culture of the Russian Federation is responsible for financing and running the museum. At present, the Museum is under control of the Department of Cultural Heritage of the Ministry and the Department of Control, Supervision and Licensing in the Sphere of Cultural Heritage. In 2011, the Conciliatory Commission, consisting of representatives of Vologda Eparchy of the Russian Orthodox Church and the Museum, was created to address the management and conservation of the cultural heritage monuments of the Monastery. The state of conservation of the property is also under monitoring by the National Commission of the Russian Federation for UNESCO.