Desembarco del Granma National Park, with its uplifted marine terraces and associated ongoing development of karst topography and features, represents a globally significant example of geomorphologic and physiographic features and ongoing geological processes. The area, which is situated in and around Cabo Cruz in south-east Cuba, includes spectacular terraces and cliffs, as well as some of the most pristine and impressive coastal cliffs bordering the western Atlantic. 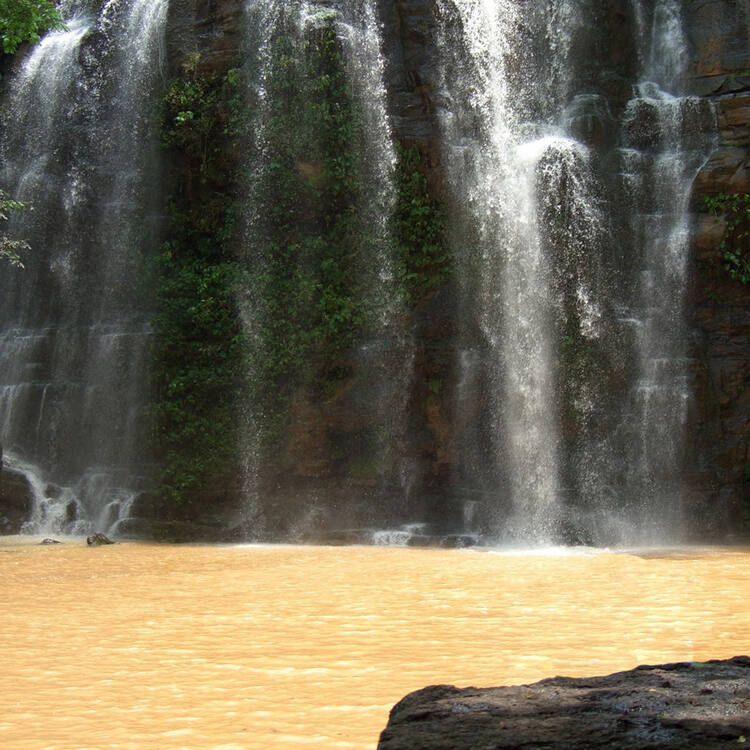 Desembarco del Granma National Park (DGNP) is situated in the Southwestern tip of Cuba, and more specifically in the municipalities of Niquero and Pilon in Granma Province. The property lies within the tectonically active zone between the Caribbean and the North American Plate and conserves the limestone terraces of Cabo Cruz at the western end of the Sierra Maestra Mountains. A series of these elevated terraces extends from 180 meters below to 360 meters above sea level. The total surface area is 32,576 ha, of which 26,180 ha are terrestrial and 6,396 ha marine area, respectively, with a terrestrial buffer zone of 9,287 ha.

The marine limestone terraces were formed by tectonic uplift and sea level fluctuations triggered by past climate change. Their number and height is as remarkable as their good conservation status. The little-disturbed landscape - and seascape - offers a wide spectrum of karst phenomena, such as giant sinkholes, cliffs, canyons and caves.

Criterion (vii): The terraces of Cabo Cruz form a singular coastal landscape in Cuba and are the world’s largest and best preserved coastal limestone terrace system. The imposing and nearly pristine coastal cliffs bordering the Western Atlantic are both a remarkable natural phenomenon and a stunningly beautiful sight. Jointly with the diverse, mostly native vegetation, the cliffs form an extraordinary visual ensemble of forms, contours, color and texture within a spectacular coastal setting.

Criterion (viii): The uplifted marine terraces of DGNP, and the continuing development of karst topography and features, are a globally significant illustration of geomorphologic and physiographic features and ongoing geological processes. DGNP displays a rare relief formed by the combination of tectonic movements in the still active contact zone between two tectonic plates and the effects of past sea level change in response to climate fluctuations. The karst forms include escarpments, cliffs, cave systems, river canyons and large sinkholes known as dolines in most diverse sizes and shapes.

The boundaries of DGNP encompass the intact limestone terraces system both on land and in the sea. The property thereby contains a full array of associated geological phenomena and features. It also provides for the conservation of valuable plant and animal species, both terrestrial and marine, some of which are restricted to the property in their global distribution. The design of the marine and coastal portion comprises the coral reef of Cabo Cruz, as well as sea grass beds and mangroves. The legislative framework assures a prominent position for national parks in Cuba and a high degree of protection.

Despite the overall naturalness of the property there are localized impacts of past logging in the semi-deciduous forests north of the highest terraces, which occurred between around 1940 and 1980. These areas have since left to recover naturally. An old forest road, quarries used prior to inscription and small abandoned agricultural plots are all likewise in the process of recovery.

While recognized on the World Heritage List primarily for its landscape beauty and geology, DGNP also hosts noteworthy biodiversity values. More than 500 plant species have been recorded in what may still be an incomplete inventory. Around sixty percent of the known plants are endemic. Twelve species are only to be found within the DGNP making the property one of the centres of floral endemism within Cuba. The documentation of terrestrial fauna includes 13 mammals, 110 birds, 44 reptiles and seven amphibians. The degree of endemism for reptiles and amphibians is in the range of a remarkable 90 %. The marine areas are home to coral formations while mangrove stands are found along the shores.

Within DGNP there are noteworthy archaeological sites, including ceremonial caves and squares of the original indigenous inhabitants. Numerous sites containing petroglyphs, pictographs and artifacts left by Taina potters, and even pre-agrarian, pre-pottery making cultures, are spread across the property. In the more recent history, in 1956, the ship "Granma" embarked here after its journey from Mexico, starting a chain of events which changed the history of the country. The ship gave the province, the property and the national park its name.

The very existence of the national park, explicitly designed to exclude any man-made changes to the terraces and the landscape, is a sound basis for the maintenance of the geological and aesthetic values of DGNP. The biodiversity values, however, require active attention in the face of anticipated climate change, existing and possible further introductions of alien invasive species, feral animals and possible future pressure from visitation. In the case of the relatively small marine area it is clear that the integrity of the reefs and seegrass beds and its associated species will also depend on the management of fisheries and waste management outside of the property.

DGNP is a unit of the National Protected Areas System of the Republic of Cuba. Building upon much earlier conservation efforts going back at least into the 1970s, DGNP was granted the status of National Park in 1986 by Ministerial Resolution. It became the first national park in Cuba's conservation history. Originally covering a smaller area, it was later extended to encompass what is today the World Heritage property. For as long as the strong conservation status remains in place the most significant threats to the site, including inhabitants and staff, may well be natural disasters, such as hurricanes and sea floods.

The entire property is owned by the government, represented by the Ministry of Science, Technology and Environment (CITMA). DGNP is managed by the National Enterprise for Flora and Fauna Protection (ENPFF), which operates under the auspices of the CITMA and is administered by the Ministry of Agriculture (MINAGRI). Besides applicable protected areas legislation, the Law on Environment, the Decree-Law on Forest Heritage and Wild Fauna and specific stipulations related to Environmental Impact Assessments form the crucial legislative framework.

Since the establishment of the national park management is based on periodic five-year plans, which are implemented through annual operating plans. The latter define operational programmes and projects. The main objectives are the conservation of the maintenance of the integrity of DGNP, cooperation with communities adjacent to and within the property, and the promotion of responsible forms of tourism allowing visitation, recreation and education without compromising the conservation values.

In order to enforce applicable legislation and to achieve the conservation objectives, DGNP has trained technical, administrative and ranger staff. There is one head office located in Belic and four secondary centres distributed across the park, as well as a boat for marine patrolling. Funding needs to be ensured permanently to secure positions and to cover operational costs.

The focus of management is put on conservation, public use and ecosystem restoration in forested areas which have been affected by past logging and agriculture. Local resource use within the property occurs mostly in the marine areas, in particular by residents of the fishing community of Cabo Cruz, which is situated within DGNP. Fishing and extraction of other marine resources by local and external users requires monitoring to keep harvesting levels in line with productivity.

Alien invasive species pose a particular threat, as is well-known from island settings. Some woody species are reported to be an obstacle to natural regeneration of degraded forest areas. While management addresses this through an active nursery and reforestation program, eventually the reduction and, if possible, eradication should be sought. In terms of invasive animal species, including specimen of feral livestock, the situation appears to be manageable due to the extreme environmental conditions, the rugged relief and the property's and naturalness all of which jointly discourage colonization by invasives. Still, invasive species require monitoring and, if needed, management responses.

There is little doubt that the tourism potential of DGNP exceeds the current use. While this constitutes an opportunity for future funding it also implies very real risks to DGNP, for example in terms of infrastructure, disturbance and waste management.

Desembarco del Granma National Park, south-east corner of the the Republic of Cuba