Tarraco (modern-day Tarragona) was a major administrative and mercantile city in Roman Spain and the centre of the Imperial cult for all the Iberian provinces. It was endowed with many fine buildings, and parts of these have been revealed in a series of exceptional excavations. Although most of the remains are fragmentary, many preserved beneath more recent buildings, they present a vivid picture of the grandeur of this Roman provincial capital. 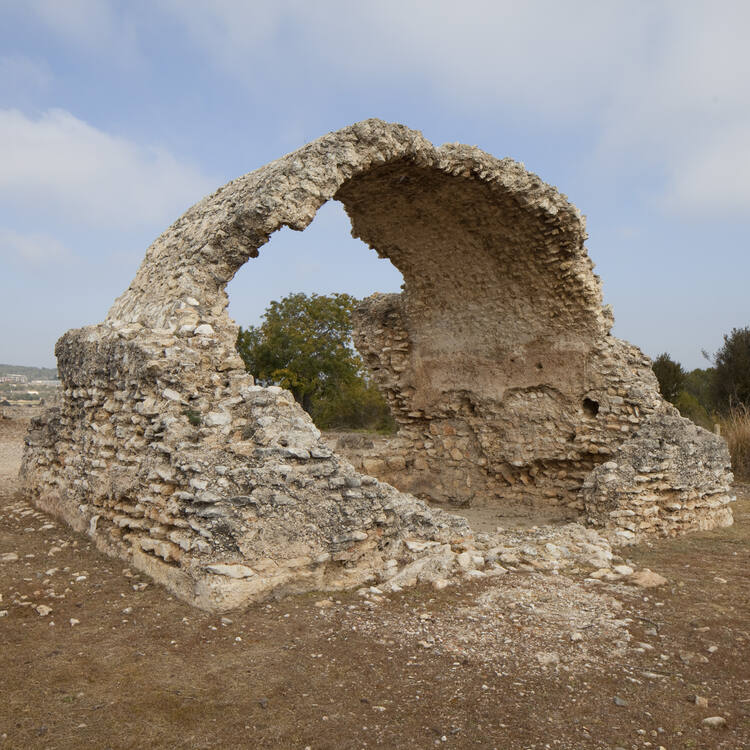 The Archaeological Ensemble of Tarraco is located in Tarragona, in the Autonomous Region of Catalonia, in the northeast of the Iberian Peninsula. The city of Tarraco was the first and oldest Roman settlement on the Iberian Peninsula and capital of most of the peninsular territory, the province of Hispania Citerior. It was a major administrative and mercantile city in Roman Spain and the major centre of the Imperial cult for all the Iberian provinces. Tarraco was endowed with many fine buildings, and archaeological excavations have revealed parts of the Roman settlement from the foundation of the city in the Republican period (3rd century BCE) to the Early Christian Era.

The serial property encompasses a total area of 32.83 ha and is comprised of the Roman city of Tarraco, the present day city of Tarragona, and a number of elements within the surrounding territory: Roman walls, the Imperial cult enclosure, the Square with representation of the provincial forum, the Circus, the Colony forum, the Roman theatre, the Amphitheatre, the Visigoth basilica and Romanesque church, the Early Christian necropolis, the Hydraulic conduits from Tarraco to Les Ferreres aqueduct, the Tower of the Scipios, the Mèdol quarry, the Centcelles villa and mausoleum, the Els Munts villa and Berà Arch.

Tarraco is remarkable for its singular conception within Roman planning: the town plan was adapted to the configuration of the land by means of a series of artificial terraces, which can be seen around the provincial forum as well as in the residential area of the Roman city. The distribution reveals an upper part, which dominates the whole city and is devoted to representation, part provincial officialdom and part recreational. Meanwhile, following the natural contours of the ground, the residential city with its colony forum stretches out to the sea and the port. The defensive system of walls of Tarraco is one of the earliest examples of Roman military engineering on the Iberian Peninsula and the most important symbols of the town, defining its form from antiquity until the 19th century. This large group of buildings determined the layout of the existing old town, where most of the architectural elements survive. It was a large complex spread over three terraces used for high-level political purposes and to bring the communities of Hispania Citerior into the Roman Empire, as shown by the iconography of sculptural and decorative finds. The architectural details and the use of imported materials are taken as evidence of its architects and craftsmen having been brought in from Rome. The quality of the materials and marbles used is remarkable, as is the richness of the architectural and sculptural decoration, which gives an idea of the grandeur of Imperial Tarraco. The different elements built in the dependent territory of the city are also noteworthy.

Criterion (ii): The Roman remains of Tarraco are of exceptional importance in the development of Roman urban planning and design and served as the model for provincial capitals elsewhere in the Roman world.

Criterion (iii): Tarraco provides eloquent and unparalleled testimony to a significant stage in the history of the Mediterranean lands in antiquity.

Owing to the importance of the buildings that made up this complex and the limited technical resources available to the builders of the mediaeval city, the Roman architectural and town planning elements have endured impressively in the modern topography of the historical centre of Tarragona, along with the monumental elements that are still present in the territory of Tarraco.

The urban fabric is preserved and has been recovered with the main buildings of public life of the capital of the Roman province of Hispania Citerior and the military centre having been identified.

Although many of the remains are fragmentary, many continue to be preserved beneath more recent buildings and can present a vivid picture of the grandeur of this Roman provincial city. Archaeological excavations have uncovered the structures of the port zone, the area with the colony forum, the baths, the Roman theatre, the amphitheatre and the circus, and the upper part of the city or cult area with the provincial forum. These elements portray the foundation, phases of construction and splendour and decline of the city and together illustrate the significance of the urban fabric of the whole.

Additional attributes, such as the Ferreres aqueduct, the Centcelles mausoleum, Els Munts Roman villa, the Berà Arch, the Tower of the Scipios and the Mèdol quarry, one of the sources of supply of blocks for building, also contribute to the understanding of the property.

The overall state of conservation of the archaeological remains is good and buildings and monuments retain their ability to reveal their importance and their roles and functions in relation to the Roman city.

The authenticity of the excavated sites is complete. The authenticity of the upstanding monuments such as the Amphitheatre, the Arc de Berá, and the Tower of the Scipios is equally high, since they have not been subject to any form of reconstruction (although the amphitheatre has undergone modifications of its form over the centuries since it ceased to be used for its original function). The remains of ancient structures incorporated in later buildings are also authentic, even though they are fragmentary and the current use of the buildings of which they form part is different from the original function.

Ancient sources, texts, epigraphs, numismatics and fundamentally archaeology itself also confirm the authenticity of the complex and its outstanding importance.

Legal protection for the property is granted by Law 16/1985 of the Spanish Historical Heritage, and in Catalonia by Law 9/1993 of the Catalan Historical Heritage. Decree 652/1966 established Tarragona and the archaeological subsoil as a historical complex and appears as such on the register of National Items of Cultural Interest. The monumental buildings of Tarraco and their surroundings have also been declared National Items of Cultural Interest in categories that include historical complex, historical monument and archaeological zone.

A series of regulations, legislative protection measures and management plans have been established to ensure the proper protection of a city that is constantly changing and growing. To that end, a large number of excavations, conservation and presentation measures have been and continue to be carried out with a series of plans and projects for conserving the different attributes of the property and to maintain the conditions of authenticity and integrity. Planning tools include the Plan for the Municipal Urban Organisation of Tarragona, the General Urban Organisation of Roda de Barà and the agreements of the Catalan Government Territorial Committee for Cultural Heritage.

The Roman city of Tarraco, like all archaeological sites partly located in a modern city, may seem vulnerable to constant threats from urban pressures, which at times hinder maintenance of the attributes of the property.

At present, the new Municipal Urban Organisation Plan, the agreements of the Territorial Committee for Cultural Heritage, which depends on the Catalan Government and the projects for the monuments guarantee adequate treatment of the sites.

Management arrangements could include a consortium that would be governed by a Royal Patronage so as to better articulate the actions and actors that manage the ensemble of monuments and museums, with their surroundings and contents, in the city of Tarragona. The Ministry of Education, Culture and Sport, the Catalan Government and Tarragona Town Council would be part of the Roman Tarraco Consortium.