Troy, with its 4,000 years of history, is one of the most famous archaeological sites in the world. The first excavations at the site were undertaken by the famous archaeologist Heinrich Schliemann in 1870. In scientific terms, its extensive remains are the most significant demonstration of the first contact between the civilizations of Anatolia and the Mediterranean world. Moreover, the siege of Troy by Spartan and Achaean warriors from Greece in the 13th or 12th century B.C., immortalized by Homer in the Iliad, has inspired great creative artists throughout the world ever since. 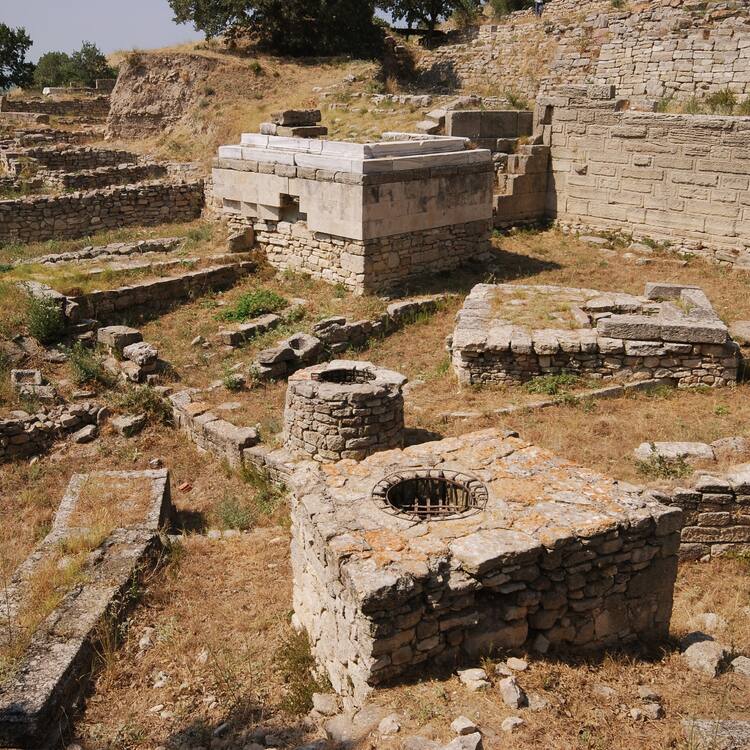 Archaeological Site of Troy (Turkey) © Ministry of Culture and Tourism

The Archaeological Site of Troy has 4,000 years of history. Its extensive remains are the most significant and substantial evidence of the first contact between the civilizations of Anatolia and the burgeoning Mediterranean world. Excavations started more than a century ago have established a chronology that is fundamental to the understanding of this seminal period of the Old World and its cultural development. Moreover, the siege of Troy by Mycenaean warriors from Greece in the 13th century B.C., immortalized by Homer in The Iliad, has inspired great artists throughout the world ever since.

Troy is located on the mound of Hisarlık, which overlooks the plain along the Turkish Aegean coast, 4.8 km from the southern entrance to the Dardanelles. The famous archaeologist Heinrich Schliemann undertook the first excavations at the site in 1870, and those excavations could be considered the starting point of modern archaeology and its public recognition. Research and excavations conducted in the Troia and Troas region reveal that the region has been inhabited for 8,000 years. Throughout the centuries, Troy has acted as a cultural bridge between the Troas region and the Balkans, Anatolia, the Aegean and Black Sea regions through migration, occupation, trade and the transmission of knowledge.

24 excavation campaigns, spread over the past 140 years, have revealed many features from all the periods of occupation in the citadel and the lower town. These include 23 sections of the defensive walls around the citadel, eleven gates, a paved stone ramp, and the lower portions of five defensive bastions. Those archaeological remains date for the most part from Troy II and VI; however, a section of the earliest wall (Troy I) survives near the south gate of the first defences. In the last 15 years, it has become clear that a Lower City existed south of the mound in all prehistoric periods and extended to about 30 ha in the Late Bronze Age. Several monuments, including the temple of Athena and the recently excavated sanctuary, are part of the Greek and Roman city of Ilion, at the site of Troy. The Roman urban organization is reflected by two major public buildings on the edge of the agora (central market place), the odeion (concert hall) and the nearby bouleuterion (council house).

The surrounding landscape contains many important archaeological and historical sites, including prehistoric settlements and cemeteries, Hellenistic burial mounds, monumental tumuli, Greek and Roman settlements, Roman and Ottoman bridges and numerous monuments of the Battle of Gallipoli.

Criterion (ii): The archaeological site of Troy is of immense significance in the understanding of the development of European civilization at a critical stage in its early development. It documents an uninterrupted settlement sequence over more than 3,000 years and bears witness to the succession of civilisations. The role of Troy is of particular importance in documenting the relations between Anatolia, the Aegean, and the Balkans, given its location at a point where the three cultures met.

Criterion (iii): The Archaeological Site of Troy bears witness to various civilizations that occupied the area for over 4,000 years. Troy II and Troy VI provide characteristic examples of an ancient oriental city in an Aegean context, with a majestic fortified citadel enclosing palaces and administrative buildings, surrounded by an extensive fortified lower town. Several other monuments and remains reflect the characteristics of Roman and Greek settlements, and other distinct attributes bear witness to the Ottoman settlements.

Criterion (vi): The Archaeological Site of Troy is of exceptional cultural importance because of the profound influence it had on significant literary works such as Homer’s Illiad and Virgil’s Aeneid, and on the arts in general, over more than two millennia.

The inscribed property contains all the necessary elements to express its Outstanding Universal Value. The archaeological remains still allow for an impressive insight into the Bronze Age city with its fortifications, palaces and administrative buildings. Of the Greek and Roman periods, two major public buildings on the edge of the agora have survived in almost complete condition.

The authenticity of the archaeological site is high, since there have been very few reconstructions. Those that have taken place on the defences have been carried out in strict accordance with the principles of anastylosis. The authenticity of the surrounding landscape is also high, and represents an organic development from prehistory to the present century that has not been subject to any obtrusive tourism development.

The 1968 Decree No 3925 of The Superior Council of Immovable Cultural and Natural Property, under the authority of the Ministry of Culture and Tourism, designated the Archaeological Site of Troy as a historic site. The Antique City of Troy was also registered as first-degree archaeological site and a conservation zone was created in 1981 by Decision No 12848 of The Supreme Council of the Immovable Ancient Objects and Monuments. The limits of the Antique City of Troy have been defined by the 1995 decision No 2414 of the Edirne Conservation Council of Cultural and Natural Properties and were made to coincide with those of the World Heritage property. It is thus protected under the provisions of Law No 2863 of the Republic of Turkey on the Conservation of Cultural and Natural Property. Under this legislation, sites and the movable properties discovered on them are State property and no works may be carried out without the authorization of the related Regional Council. With the Cabinet Decree No 8676 of 1996, the antique city of Troy and the surrounding landscape were inscribed as a “National Historical Park”. To date, the majority of archaeologically relevant areas of Troy are owned by the State and thus protected by law. Following the compulsory purchase of a number of holdings in 1994, 75% of the lower town and the cemeteries are now in State ownership and further appropriation measures are currently in progress. The remaining land in private ownership is under cultivation.

The National Parks Department of the Ministry of Forests collaborates with the Ministry of Culture on issues regarding the surrounding landscape. A plan for its preservation was prepared by the Department in 1971, revised in 2010, and constitutes the primary planning document for the management of the property.