Ravenna was the seat of the Roman Empire in the 5th century and then of Byzantine Italy until the 8th century. It has a unique collection of early Christian mosaics and monuments. All eight buildings – the Mausoleum of Galla Placidia, the Neonian Baptistery, the Basilica of Sant'Apollinare Nuovo, the Arian Baptistery, the Archiepiscopal Chapel, the Mausoleum of Theodoric, the Church of San Vitale and the Basilica of Sant'Apollinare in Classe – were constructed in the 5th and 6th centuries. They show great artistic skill, including a wonderful blend of Graeco-Roman tradition, Christian iconography and oriental and Western styles. 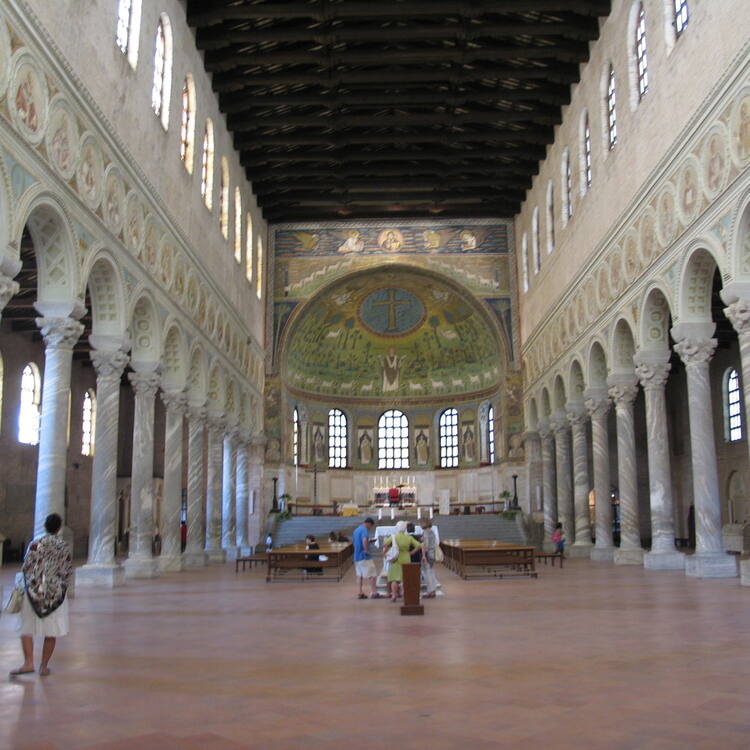 The serial property Early Christian Monuments of Ravenna in north-east Italy consists of eight monuments, namely the Mausoleum of Galla Placidia, the Neonian Baptistery, the Basilica of Sant'Apollinare Nuovo, the Arian Baptistery, the Archiepiscopal Chapel, the Mausoleum of Theodoric, the Church of San Vitale and the Basilica of Sant'Apollinare in Classe, built between the 5th and 6th centuries AD. These religious monuments, decorated with precious marble, stuccos and mosaics, reflect the major historical, political and religious events that took place in Ravenna, which became the capital of the Western Roman Empire in 402 AD, and remained prominent first Ostrogothic and then Byzantine capital in Italy through the fifth and sixth centuries.

The Mausoleum of Galla Placidia, small but lavishly decorated in the inside with inspiring mosaics against a dark blue background, reflects the Western Roman architectural tradition. The Neonian Baptistery, ornate with its inlaid marble, stuccos and multi-coloured mosaics in the cupola, is the finest and most complete surviving example of an Early Christian baptistery. From the peak of the Goths’ reign, the Arian Baptistery preserves mosaics showing the baptism of Christ and iconographic details that reflect principles of the Arian faith. The Basilica of Sant’Apollinare Nuovo was also built during the reign of Theodoric as a Palatine chapel, with mosaics in traditional Roman style that also show a strong Byzantine influence. The Mausoleum of Theodoric is a unique and singular architectural work, constructed out of large blocks of Istrian stone around a central space, and is the only surviving example of a tomb of a barbarian king of this period. The Archbishop’s Chapel, on the other hand, is the only orthodox monument built during Theodoric’s reign. The Basilica of San Vitale, from the time of Justinian, is one of the highest creations of Byzantine architecture in Italy, and combines elements from both the Western and Eastern traditions. Lastly, five kilometres from Ravenna we find the Basilica of Sant’Apollinare in Classe, an imposing building with its impressive forms, cylindrical bell tower, spacious interiors and rich marbles and mosaics.

The Early Christian buildings of Ravenna are unique testimonies of the artistic contacts and developments in a highly significant period of the cultural development in Europe. They constitute an epitome of religious and funerary art and architecture during the 5th and 6th centuries AD. The mosaics are among the best surviving examples of this form of art in Europe and have added significance due to the blending of western and eastern motifs and techniques.

Criterion (i): The Early Christian Monuments of Ravenna are of outstanding significance by virtue of the supreme artistry of the mosaic art they contain.

Criterion (ii): The Early Christian Monuments of Ravenna are without parallel because of the crucial evidence they provide of artistic and religious relationships and contacts at an important period of European cultural history. The mosaics are among the best surviving examples of this form of art in Europe and have an increased significance due to the blending of western and eastern motifs and techniques

Criterion (iv): The property constitutes an epitome of religious and funerary art and architecture during the 6th century AD.

This serial property includes all the essential elements necessary to demonstrate its Outstanding Universal Value. The group of eight monuments that form the site include the most representative examples of architectural and artistic development between the fifth and sixth centuries AD, in particular regarding mosaic art. These monuments are testimonies of the role that Ravenna played, first as capital of the Western Roman Empire, later as residence of the Ostrogoths of Theodoric and his successors, and lastly as the capital of the Byzantium Exarchate in Italy.

The major pressures on the property are subsidence, condensation damp caused mainly by tourist flow, and pollution, which are being addressed by the site managers.

More recently, the monuments have undergone several restoration projects. The works, performed by the Soprintendenza per i Beni Archittetonici e Paesaggistici di Ravenna, in compliance with the principles of the 1964 Venice Charter, have permitted the monuments’ conservationuntil today.

The cultural tradition and technique of mosaics, which play an active role in the city’s cultural identity, are kept alive through a range of activities aiming to promote knowledge, training, conservation and valorisation of mosaic art.

This property is subject to the Italian cultural heritage protection and conservation legislation (Legislative Decree 42/2004) which establishes specific legal protection tools for the eight monuments, and require prior authorisation from the local offices of the Ministry for Cultural Heritage and Activities for all interventions. Town planning regulations reiterate the national legislation, thereby only permitting scientific restoration projects.

The property is managed by a group of institutions, operating on different levels and with different skills. These include, in particular, the Ministry for Cultural Heritage and Activities, which is responsible through its local offices for the protection and conservation of cultural heritage, while the Municipal Authority – Comune di Ravenna - is responsible for drafting and implementing the City’s conservation and management strategies using town planning tools and regulations for territorial activities. The other local authorities (Regional and Provincial councils) collaborate with protection, conservation and management activities, as well as cultural heritage promotion. The Municipality of Ravenna carries out particularly important coordination activities for the management of the property. The management is entrusted to a Management Committee in which all the main institutional stakeholders formally responsible are represented, including the Regional Cultural Heritage Department, the Local Office of the Ministry for Cultural Heritage and Activities – Soprintendenza - the Municipality of Ravenna and Opera di Religione of the Ravenna Diocese, the local reference body for the Catholic Church, owner of some of the monuments included in the property. The Coordination Committee is responsible for implementing the Management Plan, paying particular attention to conservation, valorisation and promotion activities for monuments.

Priority actions in the Management Plan include a specific action plan for mosaic conservation, including studies and monitoring of the state of the mosaics in the property conducted by the School of Restoration; an action plan dedicated to the transfer of knowledge and training on mosaic art in schools, from primary schools through to the Fine Art Academy; and a communication action plan implemented using innovative technological tools.