From the 18th century to 1918, Schönbrunn was the residence of the Habsburg emperors. It was designed by the architects Johann Bernhard Fischer von Erlach and Nicolaus Pacassi and is full of outstanding examples of decorative art. Together with its gardens, the site of the world’s first zoo in 1752, it is a remarkable Baroque ensemble and a perfect example of Gesamtkunstwerk. 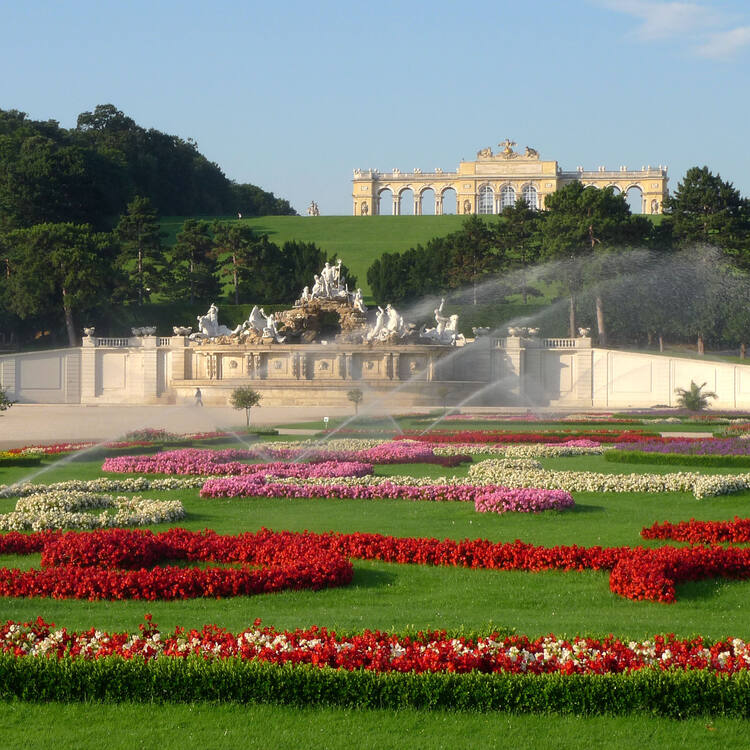 The site of the Palace and Gardens of Schönbrunn is outstanding as one of the most impressive and well preserved Baroque ensembles of its kind in Europe. Additionally, it is a potent material symbol of the power and influence of the House of Habsburg over a long period of European history, from the end of the 17th to the early 20th century.

It is impossible to separate the gardens from the palace, of which they form an organic extension: this is an excellent example of the concept of Gesamtkunstwerk, a masterly fusion of many art forms.

A small hunting lodge and later summer residence of the Habsburg family was rebuilt after total destruction during the last Turkish attack in 1683. During construction work the project was expanded into an Imperial summer residence of the court. As such it represents the ascent and the splendour of the Habsburg Empire. At the peak of Habsburg power at the beginning of the 18th century, when imperial Vienna following the Turkish reflected its regained significance in spectacular examples of newly developing Baroque art, Schönbrunn was one of the most important building projects of the capital and residency.

The ample Baroque gardens with their buildings (Gloriette, Roman ruins etc.) and statuary testify to the palace's imperial dimensions and functions. The original intention, when they were laid out in the 18th century, was to combine the glorification of the House of Habsburg with a homage to nature. The Orangery on the east side of the main palace building is, at 186 m, the longest in the world. The Great Palm House is an impressive iron-framed structure, 114 m long and divided into three Sections, erected in 1880 using technology developed in England.

Criterion (i): The Palace and Gardens of Schönbrunn are an especially well preserved example of the Baroque Princely residential ensemble, which constitute an outstanding example of Gesamtkunstwerk, a masterly fusion of many art forms.

Criterion (iv): The Palace and Gardens of Schönbrunn are exceptional by virtue of the evidence that they preserve of modifications over several centuries that vividly illustrate the tastes, interests, and aspirations of successive Habsburg monarchs.

With the exception of some minor alterations dating from the 19th century, the property includes all elements of the Palace and Gardens of Schönbrunn. The property is of such a size it offers a complete representation of Imperial Palace features. None of the attributes within the property are under threat. However the visual integrity of the property is vulnerable to high-rise developments in Vienna.

The original building has been expanded and modified considerably since it was built, to suit the tastes and requirements of successive imperial rulers. No significant changes have been made to the structures themselves since the work on the facades commissioned by Franz I at the beginning of the 19th century. The furnishings and decoration of the Imperial apartments, the theatre, the Chapel, and other important components are wholly authentic. The structure of the Baroque park layout is also virtually untouched, and traditional 18th century techniques are still used for trimming its trees and bushes. Schönbrunn became, as it were, frozen in time in 1918 when it became the property of the Republic of Austria. Since that time, the form that it possessed in 1918 has been faithfully retained, both in the original fabric and decoration and in the restoration following wartime damage. The complex of the Palace and park may be considered to be an outstanding example of Gesamtkunstwerk because of the way in which it has preserved intact the originality of its architecture, the design and furnishings of the Palace, and the spatial and visual relationship of the buildings to the park.

The buildings and the gardens are owned by the Republic of Austria. Since 1st  October 1992 the property has been managed by the Schloss Schönbrunn Kultur- und Betriebsgesellschaft mbH (Ltd). This company entirely belongs to the State. Maintenance of the gardens is carried out by the Federal Gardens Service (Bundesgärten).

The property is protected at Federal and Provincial level. Areas adjacent to the property have been designated as protection zones, and these also delineate the buffer zone. The City of Vienna controls these surroundings by zoning and building regulations. There remains an on-going need to ensure that the skyline of the property and views out are not compromised by tall buildings in its setting.

The day-to-day professional management of the property is carried out on the basis of agreed budget, staff and investment plans. Following the requirements of the Federal Office for Protection of Monuments and the City of Vienna, these plans are elaborated on and pursued by experts employed by the Federal State. The "Schönbrunn Akademie" (Schönbrunn Academy) also provides training programmes on heritage management and specific technical issues.

The operational budgets are financed through earnings achieved by the managements' operating company, assisted by the Federal State. In the buffer zone, funds are made available from the City of Vienna.