Established as the capital of unified Viet Nam in 1802, Hué was not only the political but also the cultural and religious centre under the Nguyen dynasty until 1945. The Perfume River winds its way through the Capital City, the Imperial City, the Forbidden Purple City and the Inner City, giving this unique feudal capital a setting of great natural beauty. 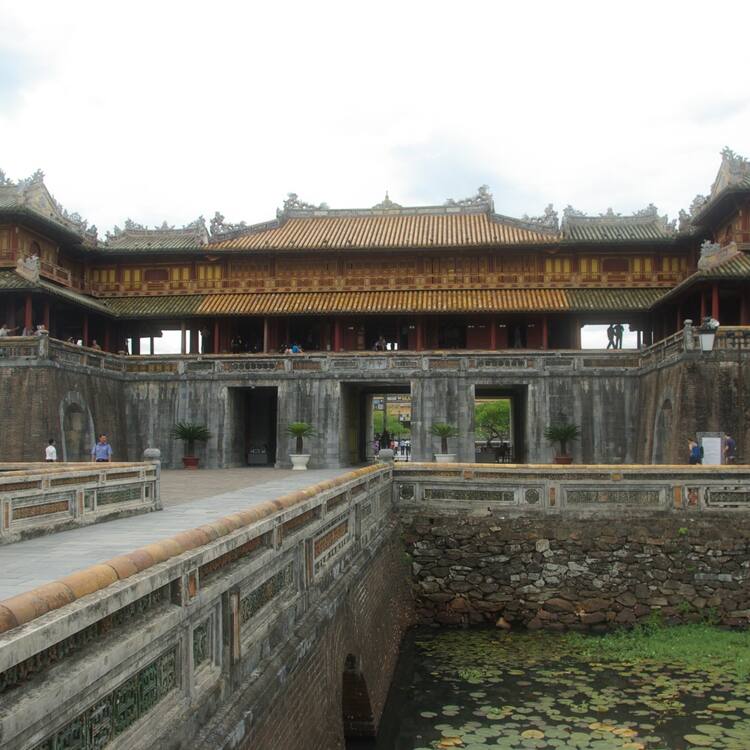 The Complex of Hue Monuments is located in and around Hue City in Thua Thien-Hue Province in the geographical centre of Vietnam and with easy access to the sea. Established as the capital of unified Vietnam in 1802 CE, Hue was not only the political but also the cultural and religious centre under the Nguyen Dynasty, the last royal dynasty of Vietnamese history, from 1802 to 1945 CE.

The plan of the new capital is in accordance with ancient oriental philosophy, and respected the physical conditions of the site.

The Ngu Binh Mountain (known as the Royal Screen) and the Perfume River, which runs through the city, give this unique feudal capital an entire setting of great natural beauty as well defining its symbolic importance. The site was chosen for a combination of natural features – hills representing a protective screen in front of the monuments or taking the role of “a blue dragon” to the left and “a white tiger” to the right – which shield the main entrance and prevent the entry of malevolent spirits.  Within this landscape, the main features of the city are laid out.

The structures of the Complex of Hue Monuments are carefully placed within the natural setting of the site and aligned cosmologically with the Five Cardinal Points (centre, west, east, north, south), the Five Elements (earth, metal, wood, water, fire), and the Five Colours (yellow, white, blue, black, red).

The central structure is the Hue Citadel area which was the administrative centre of southern Viet Nam during the 17th and 18th centuries CE. Within the Hue Citadel were located not only administrative and military functions of the Empire, but also the Imperial Residence, the Hoang Thanh (Imperial City), the Tu Cam Thanh (Forbidden Purple City) and related royal  palaces.

Tran Binh Dai, an additional defensive work in the north-east corner of the Capital City, was designed to control movement on the river. Another fortress, Tran Hai Thanh, was constructed a little later to protect the capital against assault from the sea.

Outside the Capital City there are several associated monuments of importance. In the outlying areas were located important ritual sites related to the spiritual life of the dynasty such as the Van Mieu (Temple of Literature), the Dan Nam Giao (Esplanade of Sacrifice to the Heaven and Earth), the Ho Quyen (Royal Area), the Den Voi Re (Temple of the Roaring Elephant), and the Chua Thien Mu (Celestial Lady Pagoda).  Further upstream, arranged along the Perfume River were the tombs of the dynasty’s emperors.

The Complex of Hue Monuments is a remarkable example of the planning and construction of a complete defended capital city in a relatively short period in the early years of the 19th century CE.  The integrity of the town layout and building design make it an exceptional specimen of late feudal urban planning in East Asia.

Criterion (iv):   The Complex of Hue Monuments is an outstanding example of an eastern feudal capital.

The Complex of Hue Monuments site has suffered from the effects of 3 wars, as well as modern development and expanding human settlements.  Nevertheless the complex of monuments within its landscape setting remains sufficiently well preserved as a whole, or recorded, to demonstrate that the overall integrity of the site has been maintained.

All the key elements of monumental arts, and town planning, that are necessary to express the value for which the site is inscribed on the World Heritage List are included within the well-protected boundaries of the property and its buffer zone. However the wider landscape setting of the property, its relationship with the natural landscape and the other temples and tombs along the Perfume River associated with the monuments within the property, are not included within either boundaries.

The authenticity of the Complex of Hue Monuments may be understood through the unique layout of the design of the site, which became the imperial capital of the Vietnam Empire in the 19th and early 20th centuries. The basic architectural and landscape features of the site have been maintained intact since their original construction in the early 19th century CE.

The natural setting of the Perfume River, within which the citadel, temples and tombs have been laid out in accordance with geomantic principles, demonstrates the symbolic meaning, beauty and significance of the site. The original plan within this setting remains evident. However some of the attributes that allow the understanding of the wider relationship with the river are outside the boundary. The overall setting of the town within its landscape could be compromised by urbanization and development of infrastructure.

Although some of the structures are now in ruins, and most of the significant existing monuments have been partially restored, this has been carried out using traditional techniques and materials, according to international professional standards of conservation to ensure that the authenticity of the monuments has been maintained.

There continue to be concerns that threats from flooding, insect damage and inappropriate development within the site could affect its authenticity and the ability of the site to demonstrate its Outstanding Universal Value.

The Complex of Hue Monuments is wholly owned by the Government of the Socialist Republic of Viet Nam. Guided by the 1972 Convention on the Protection of the World Cultural and Natural Heritage, the National Heritage Law (2001, revised in 2009), and a number of other provincial regulations and decisions, the Hue Monuments Conservation Centre, placed directly under the Thua Thien Hue Provincial People’s Committee, is the institution responsible for the management of the complex and the protection of its outstanding universal value. Staffed by more than 700 people from many different professional backgrounds, this institution deals with all issues including zoning, research, tangible and intangible heritage preservation, traditional material reproduction, visitor management, as well as the planning and protection of the landscape setting and associated features in the buffer zone and immediately surrounding area.

The Complex of Hue Monuments is given special attention in the Socio-Economic Development Master Plan of Thua Thien Hue Province, which provides direction for the conservation and restoration of the complex through 2020. In addition, an Adjusted Planning Framework for the Complex of Hue Monuments (2010-2020) was approved by the Prime Minister on 7 June 2010. This should control any further infrastructure projects that could impact on the property.  The details of how this will protect the site should be explained in the Management Plan in preparation, which itself should be integrated into the regulatory framework for Hue (the Master Plan).

The completion of the Management Plan is a priority. The Plan should be based on the approved Statement of Outstanding Universal Value. Re-zoning of the protected area is being considered in order to control increasing urbanization and development of infrastructure.

It is important that the works needed to minimize the negative impact of noise and visual pollution on the Minh Mang and Khai Dinh tombs and to reduce the impact of the new highway are completed.  Any remaining illegal buildings, within the site should be removed.

In addition to development, climate change and natural disasters are other potential problems for the long-term management of the property.  To reduce the impact of recurrent floods, three dams are being constructed upstream along the Perfume River. In addition the traditional water network and drainage system within and around the Citadel will be restored, as a means to reduce the vulnerability of the World Heritage property and its inhabitants to the risk of flood, and to reconstitute the historic network of ponds and canals.

The level of tourism at the Hue Monuments is growing such that it needs to be managed so as not to exceed the capacity of the site. This issue should also be addressed in the Management Plan. 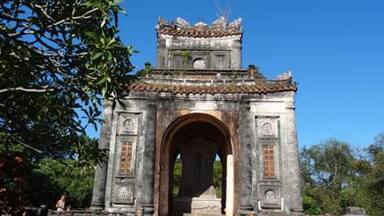 Restauration and revitalisation of the Complex of Hué Monuments and historical town, Viet Nam
News 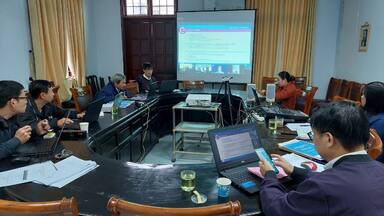