A spectacular area stretching over more than 26,000 ha in China's Hunan Province, the site is dominated by more than 3,000 narrow sandstone pillars and peaks, many over 200 m high. Between the peaks lie ravines and gorges with streams, pools and waterfalls, some 40 caves, and two large natural bridges. In addition to the striking beauty of the landscape, the region is also noted for the fact that it is home to a number of endangered plant and animal species. 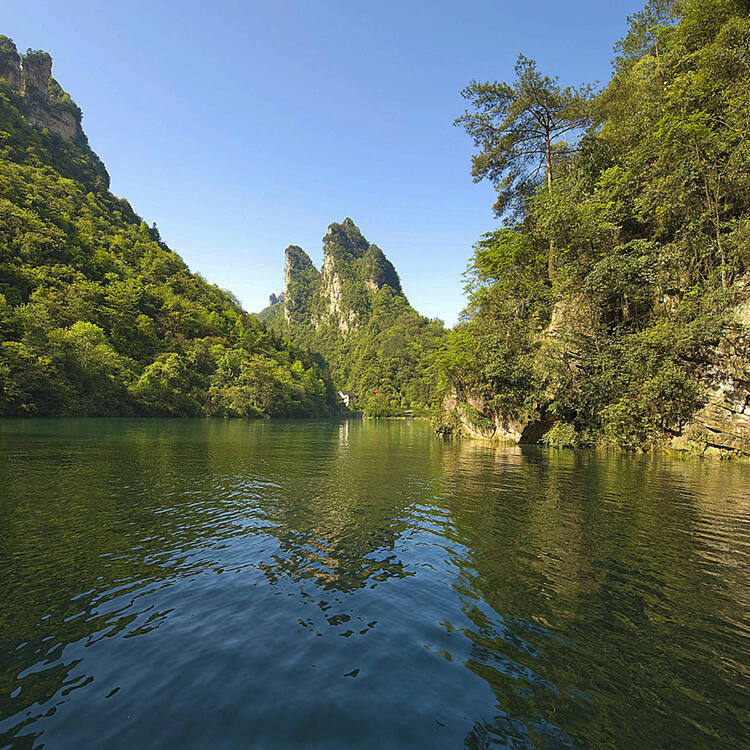 Wulingyuan is an island of nature within a heavily populated agricultural region. A spectacular area stretching some 26,400ha in China’s Hunan Province, the site is dominated by more than 3,000 narrow quartz sandstone pillars, many over 200m high. Nestled within its towering peaks lie ravines and gorges with streams, pools and waterfalls, two large natural bridges, and some 40 caves. Impressive calcite deposits are a notable feature within these caves. In addition to the striking beauty of the landscape, including spectacular jagged stone peaks, luxuriant vegetation cover and clear lakes and streams, the region is also home to a number of endangered plant and animal species.

Criterion (vii): The huge number of sandstone columns and peaks—more than 3,000—are spectacular. These, coupled with other land forms (natural bridges, ravines, waterfalls, streams, pools and caves) and dense broadleaf forest, present an aesthetically beautiful landscape enhanced by the mists and clouds which frequently shroud the site. There are more than 40 caves and two huge natural stone bridges, one of which rises 357 m above the valley floor.

At time of evaluation it was also noted that with additional information there could also be justification for inscribing this property under criterion (x), as the site provides important habitat for a number of threatened plant and animal species such as dhole, Asiatic black bear and Chinese water deer.

The property has within its boundaries all the necessary elements demonstrating the natural beauty for which it was inscribed, as well as a buffer zone. Integrity issues noted at time of inscription include human pressure from use of the reserve by people living in and around it, and the intense pressure from visitors. Numerous tourist facilities also have an aesthetic impact on the natural values of the property. However many measures have been and are still being undertaken to address these issues.

Wulingyuan was approved and listed as a national key scenic area by the Chinese State Council in 1988, thus has a long history of protection under relevant national and provincial laws and regulations. In 1999, owing to the growing commercialization and loss of natural values, the local authorities declared the Decision of Protecting Wulingyuan World Natural Heritage Property, and began the demolition of houses in the scenic areas. The scenic area was expanded, settlement was reduced and ecological tourism was promoted. By the end of 2002, the adverse impacts on the aesthetic values of Wulingyuan scenic areas had been mitigated. In January 2001, the Hunan Provincial People’s Congress Standing Committee implemented the Regulations on Protection of Wulingyuan World Natural Heritage Property, providing a stronger legal basis for protection. The property is managed by the Administrative Bureau of Wulingyuan Scenic and Historic Interest Area assisted by several other resource management agencies. The Office of Heritage Protection was established in 2000 as the operational agency for managing the property and subsequently the Zhangjiajie, Tianzishan, Suoxiyu and Yangjiajie Scenic Area Offices and Protection Stations were established. In total, there are approximately 500 management staff. Museums and visitor centres have been created for research, education and interpretation of the property’s natural values

In 2005, the Comprehensive Plan of Wulingyuan Scenic and Historic Interest Area was revised and Wulingyuan World Natural Heritage protection regulations were established to ensure the long-term protection and conservation of the property. The quartz sandstone peaks, columns, karst landscapes, gorges, species, vegetation, ecology, and all other elements that contribute to be aesthetic value of Wulingyuan need to be strictly maintained and monitored. The number, seasonal distribution and activities of visitors is scientifically controlled and adjusted so that a dynamic balance between World Heritage, people and the economy is established. In order to deal with the challenges of tourism development and environment protection, special organizations have been established which monitor all the elements contributing to the aesthetic value of the property cited above as well as the numbers of visitors and their impact, air quality, water quality, environmental quality, electronic radiation, and noise in order to fulfil both the requirements of international conventions and national laws and regulations.