The List Historic Town of Sukhothai and Associated ...
Print

Sukhothai was the capital of the first Kingdom of Siam in the 13th and 14th centuries. It has a number of fine monuments, illustrating the beginnings of Thai architecture. The great civilization which evolved in the Kingdom of Sukhothai absorbed numerous influences and ancient local traditions; the rapid assimilation of all these elements forged what is known as the 'Sukhothai style'. 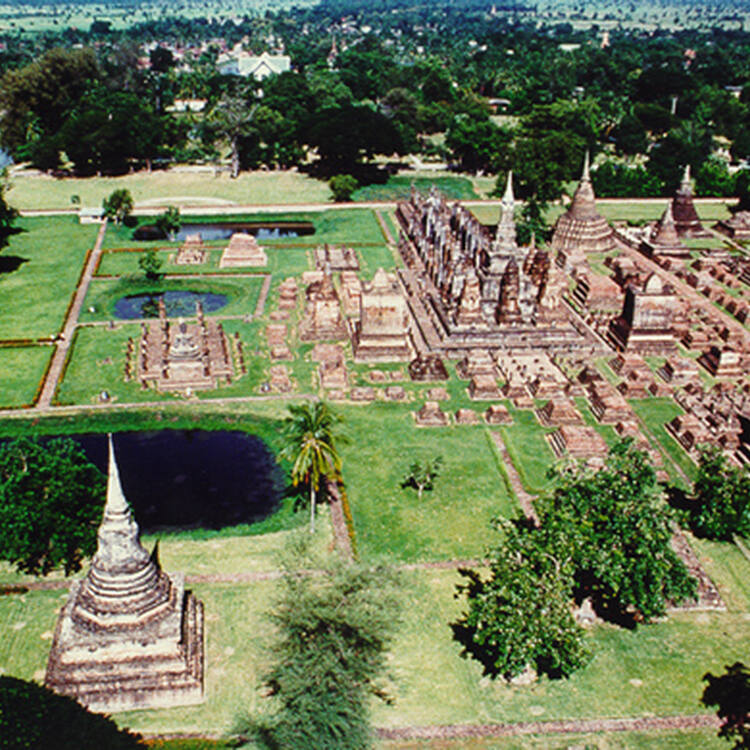 Situated in the lower northern region of present-day Thailand, the Historic Town of Sukhothai and Associated Historic Towns is a serial property consisting of three physically closely related ancient towns. The total property area is 11,852 ha., comprising Sukhothai 7,000 ha., Si Satchanalai 4,514 ha., and Kamphaeng Phet 338 ha. Sukhothai was the political and administrative capital of the first Kingdom of Siam in the 13th and 15th centuries. Si Satchanalai was the spiritual center of the kingdom and the site of numerous temples and Buddhist monasteries. Si Satchanalai was also the centre of the all-important ceramic export industry. The third town, Kamphaeng Phet, was located at the kingdom’s southern frontier and had important military functions in protecting the kingdom from foreign intruders as well as providing security for the kingdom’s extensive trading network. All three towns shared a common infrastructure to control water resources, and were linked by a major highway known as the Thanon Phra Ruang after the king who constructed it.

Sukhothai, Si Satchanalai and Kamphaeng Phet all shared a common language and alphabet, a common administrative and legal system, and other features which leave no doubt as to their unity as a single political entity. All three towns also boasted a number of fine monuments and works of monumental sculpture, illustrating the beginning of Thai architecture and art known as the “Sukhothai style.”

Under royal patronage, Buddhism flourished and many impressive monasteries were constructed of brick covered with carved stucco, illustrating the idealized beauty and the superhuman characteristics (mahapurisalakkhana) of the Lord Buddha and His Teachings. It is from the remains of these religious monuments that today we best know and appreciate the achievements of the people of the Historic Town of Sukhothai and AssociatedHistoricTowns.

The Kingdom of Sukhothai is accredited with the invention and development of many of the unique identifying characteristics of Siamese (Thai) culture, many of them attributed directly to the kingdom’s most famous and beloved King Ramkhamhaeng, who is considered the Founding Father of the Thai Nation.

The many examples of sculpture, wall paintings and decoration features found within the abandoned temple and monastery compounds are important in establishing the uniqueness and outstanding importance of the three towns. The art and architecture of Sukhothai, Si Satchanalai and Kamphaeng Phet have been extensively studied by art historians who have identified and catalogued its unique style, distinctive from Khmer and other earlier regional styles, and who consider the Buddhist monuments and their associated sculptures of the three towns to be masterpieces of artistic creation, giving the art style its own name: “Sukhothai style.” Stone inscriptions found at the sites provide evidence of the earliest examples of Thai writing and give a detailed account of the economy, religion, social organization and governance of the Sukhothai Kingdom.

In addition to being the place of pioneering achievements in architecture and art, language and writing, religion and law, the historic towns of the Sukhothai Kingdom were home to accomplished innovators in hydraulic engineering. They modified the landscape of the kingdom in such a way that water was dammed; reservoirs, ponds and canals were constructed; flooding controlled; and water was brought to serve a variety of agricultural, economic and ritual functions as well as to provide the towns’ inhabitants with water for their daily lives, avenues of communication, and protection in the form of city moats. From that day onwards until the Rattanakosin period, the kings of Thailand have been acknowledged for their ability to control the kingdom’s water.

Sukhothai was a unique state in terms of political and administrative systems which were remarkably egalitarian for the time, based on the patron-client relationships, powerful social and religious institutions, and codified laws.  The kingdom’s diverse economic system was based on agricultural production, but also depended heavily on industrial exports, especially of high-quality ceramics. Together, these features made Sukhothai a prosperous time and place, known in Thai history as a Golden Age and “The Happiness of Thai” or “The Dawn of Happiness.”

Criterion (i): The Historic Town of Sukhothai and Associated Historic Towns represent a masterpieces of the first distinctive Siamese architectural style, reflected in the planning of the towns, the many impressive civic and religious buildings, their urban infrastructure, and a sophisticated hydraulic (water management) system.

Criterion (iii): The Historic Town of Sukhothai and Associated Towns are representative of the first period of Siamese art and architecture, language and literature, religion, and the codification of law, from which was created the first Thai state.

The integrity of Sukhothai, Si Satchanalai and Kamphaeng Phet is to be found, individually for each town, in the large number of intact standing structures and historic urban morphology but is challenged by the ongoing excavation of the monuments programme. The integrity of all three cities together is characterized by the intact landscape engineering which created the elaborate and extensive infrastructure of water reservoirs, canals and roads which were common to all three historic towns and linked them together, giving a political, economic and cultural coherence to the large territory controlled by the Sukhothai Kingdom.

The integrity of the property is further reflected in the architecture and art features at all sites, as well as the language and content of stone inscriptions discovered on site, in addition to other material culture remains uncovered through archaeological excavation in the three towns. In the past some objects have been removed from Sukhothai for protection. For example King Rama I (1782-1890) removed 2,128 Buddha statues and King Mongkut (Rama IV 1851-1868) found a stone inscription and a stone throne which he also removed.

The entire extent of each historic town is protected within the boundaries of their respective national park, which are also, collectively, the boundaries of the World Heritage property, and no development other than that which serves site protection, conservation and interpretation is allowed. There is no through traffic within the parks, and all activities within the parks are strictly controlled, including the protection of the historic landscape and the strict regulation of the use of the monuments (most of which are the remains of former temples or Buddhist monasteries). This ensures that the archaeological, as well as the historic integrity of the monuments, and the relationship of one to another is maintained.

The authenticity of the Historic Town of Sukhothai and Associated Historic Towns is derived from a variety of sources. First and foremost among them is the authenticity of the architectural remains of temples and Buddhist monasteries which have been protected by custom since they were first constructed. Over their long history of almost 1000 years, the buildings – whether in active use or as historic relics -- have been maintained and repaired using traditional materials and methods. Since the 1960s, with the registration of the remains of the historic towns under government protection, the Thai Fine Arts Department has overseen all maintenance, conservation and repair work.

Archaeological excavations have revealed the remains of economic activities which took place on site, in particular, that of a flourishing ceramic export industry, which has been dated to the period of the Sukhothai Kingdom by thermoluminesence as well as through comparative analysis with dated material from other sites.

Other aspects of the property’s authenticity are the modifications of the natural landscape for the purposes of fortification, communication (canals and roads), and for water management (dams, dykes and causeways). These remain intact and their historic functions can be determined. These landscape engineering features have been dated through a variety of chronometric techniques appropriate to archaeology of the historic period, including through palaeontology and palaeo-botanical analysis.

The roads, canals, dams and dykes are still in use today by the local population. The religious establishments in the historic sites continue to be revered and used for worship. Traditional festivals are still maintained on site. The unique Thai language alphabet invented at Sukhothai remains in use today. And the personalities known from Sukhothai history continue to be respected as the founders of the Thai nation.

The Historic Town of Sukhothai and its AssociatedHistoricTowns are managed as three independent historical parks under the direction of the Fine Arts Department, Ministry of Culture, which ensures that the management of the three parks is coordinated as a single World Heritage property. The sites were gazetted and protected by Thai law through the Act on Ancient Monuments, Antiques, Objects of Art and National Museums, B.E. 2504 (1961) as amended by Act (No. 2), B.E. 2535 (1992), enforced by the Fine Arts Department, Ministry of Culture. There are also related laws enforced by related government units which give further protection to the property, such as the Ratchaphatsadu Land Act, B.E. 2518 (1975), the City Planning Act B.E. 2518 (1975), the Enhancement and Conservation of National Environmental Quality Act, B.E. 2535 (1992), the Building Control Act B.E. 2522 (1979) as amended by Act (No. 2) B.E. 2535 (1992), as well as municipal regulations. In addition to legal protection, master plans, action plans, personnel development plans, and regulations on the control of building construction and land use within the compounds of ancient monuments are in force at the three parks. The budget allocated for the conservation and development of the historical parks comes from the Government and the private sector.

Within the current framework of the reform of national administration which aims to decentralize government functions and responsibilities, it is expected that local, regional, and national committees for the protection of World Heritage will be established. These committees will enhance collaboration with universities and non-governmental professional organizations which work to conserve heritage sites.

Visitation will continue to be promoted and managed, as Sukhothai and its associated historic towns are major international and domestic tourist destinations, particularly during the annual Loy Krathong festival. There is an airport nearby dedicated almost exclusively to bringing visitors to the historic towns, and visitor facilities are expected to increase.

The Fine Arts Department aims to disseminate further knowledge of the historic significance of the three individual sites and of the World Heritage property as a whole. At Sukhothai, there is a branch of the National Museum, with information centres at Si Satchanalai and Kamphaeng Phet. These hold important research collections of art and archaeology from the three sites. 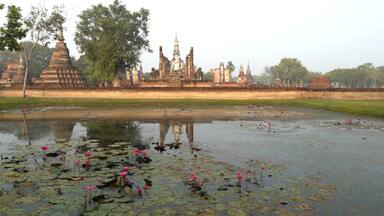 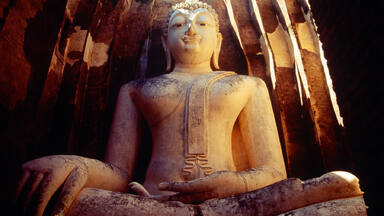