Sucre, the first capital of Bolivia, was founded by the Spanish in the first half of the 16th century. Its many well-preserved 16th-century religious buildings, such as San Lázaro, San Francisco and Santo Domingo, illustrate the blending of local architectural traditions with styles imported from Europe. 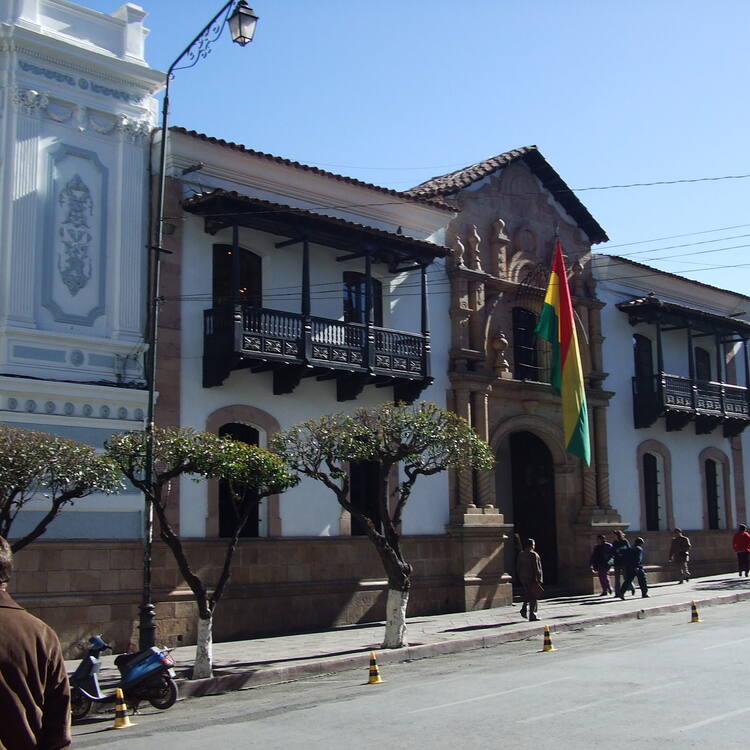 The Historic City of Sucre, located in the foothills of the Sica Sica and Churuquella in central-south of Bolivia, is an excellent, intact and well-preserved illustration of the architectural blending achieved in Latin America through the assimilation of local traditions and styles imported from Europe.  Founded by the Spanish in 1538 as Ciudad de la Plata de la Nueva Toledo (Silver Town of New Toledo) on the lands of the Yampara, indigenous culture of the Characas confederation, La Plata was for many years the judicial, religious and cultural centre of the region. The city was renamed in honour of the deceased leader of the fight for Independence, Antonio Jose de Sucre in 1839, when it was declared the first capital of Bolivia

The historic city was designed according to a simple urban plan with checkerboard- patterned streets, similar to other towns founded by the Spanish in America in the 16th century.  The mineral wealth of the nearby city of Potosi influenced the economic development of La Plata that was also an important cultural centre (University of Saint-Francois-Xavier, the Royal Academia Carolina, and San Isabel de Hungria Seminario) and the seat of the Characas Audiencia, forerunner of the present Supreme Court. In 1609, the city became the seat of an archbishopric and during the 17th century La Plata served as a religious centre for the Spanish eastern territories.

Many religious buildings located on the 113.76 ha of the historic centre of the city bear witness to the period that marked the beginnings of the Spanish city, including churches dating back to the 16th century, such as San Lázaro, San Francisco, Santo Domingo and the Metropolitan Cathedral, the construction of which began in 1559 and was completed 250 years later. The Casa de la Libertad (House of Freedom), constructed in 1621 as part of the Convent of the Jesuits, is considered to be the most important historic monument of Bolivia because it was here where the events leading to the independence of the country took place.  The buildings of the 18th century are characteristic of the local architecture and similar to those built during the same period at Potosi. The more recent buildings (late 18th century and early 19th century) retained the patios that characterized earlier times but were adapted to the Neoclassical style imported from metropolitan Spain.  The buildings of Sucre illustrate eloquently the blending of local architectural traditions and styles imported from Europe, including those at the beginning of the Renaissance, Mudejar, Gothic, Baroque and Neoclassical periods, between the 16th and 19th centuries.

Criterion (iv): The rich heritage of the Historic Centre of the Spanish city of Sucre (La Plata) is an excellent intact and well-preserved illustration of this architectural blending achieved in Latin America through the assimilation of local traditions and styles imported from Europe.

The boundary of the property includes all the necessary components that comprise the Outstanding Universal Value of the Historic City of Sucre, with buildings built between the 16th and 19th centuries that illustrate the assimilation and blending of local architectural traditions and styles imported from Europe. Thus, the area covered by the boundary is sufficient (472.8 ha) to enable a full representation of the characteristics and process that transmit the importance of this property. Furthermore, the property has not suffered any negative effects from development or lack of maintenance. There is a buffer zone of 358.24 ha.

The Historic City of Sucre is authentic in terms of form and design, material and substance, as well as location and surroundings. Its buildings, architectural result of the symbiosis of local and imported styles, have been maintained and conserved in a homogenous and harmonious manner, in both form and surroundings, in harmony with the environment.

The Historic City of Sucre is protected by various national laws, supreme decrees, national and municipal orders and resolutions that specifically determine legal protection measures including, among others, the Political Constitution of the State, Article 191; the Law on National Monuments, 8/5/1927; Art Monuments: the Designation, in Sucre, of 8 national monuments, Article 8 of the Supreme Decree (S.D.) 11/4/1930; the Designation as historic city the old city centre of Sucre. S.D.  No. 9004 of 27/11/1969; the Designation as National Monuments of the buildings and structures located in Sucre, S.D. No. 9365 of 27/8/1970; Additional Standards on artistic, historical and  archaeological heritage and monuments, S.D. No. 05918 of 6/11/1961; and the Heritage Promotion Law No.2068 of 12/4/2000.

The Agency responsible for the management of the property is the Ministry of Culture, attached to the national government. It has elaborated preservation and conservation policies such as the Historic Heritage Regulation (Chapter IV) and the Monitoring of the treatment of Historic Heritage (Chapter III) of the Regulatory Plan for Sucre in 1974. The Plan involves social, economic and educational support through the development of cultural tourism envisaged as a resource to maintain and preserve the historic city centre. The key municipal tools include the Master Plan for the Revitalization of the Historic City Centre, approved by O.M. No. 083/08; and the Regulation for Conservation of the Historic Zones of Sucre approved by O.M. No. 003/98, the legal and technical instrument that controls interventions in the three protected zones of the historic city centre and includes encouragements and penalties. The Unidad Mixta Municipal de Patrimonio Histórico – Plan de Rehabilitación de las Areas Históricas de Sucre “PRAHS” (Mixed Municipal Unit of the Direction of Historical Heritage – Rehabilitation Plan for the Historical Areas of Sucre “PRAHS”) is responsible for respect of the regulation; any action or intervention in the historic city centre must have the approval of this unit. The preservation and conservation of the Historic City of Sucre are based on international standards, with national and international funding.

The maintenance of the Outstanding Universal Value of the property over time will require verification and monitoring of its authenticity and integrity to ensure that they are not endangered by potential or identified threats. The development plan for Sucre should, however, strengthen the aspects linked to cultural heritage preservation.