Zamosc was founded in the 16th century by the chancellor Jan Zamoysky on the trade route linking western and northern Europe with the Black Sea. Modelled on Italian theories of the 'ideal city' and built by the architect Bernando Morando, a native of Padua, Zamosc is a perfect example of a late-16th-century Renaissance town. It has retained its original layout and fortifications and a large number of buildings that combine Italian and central European architectural traditions. 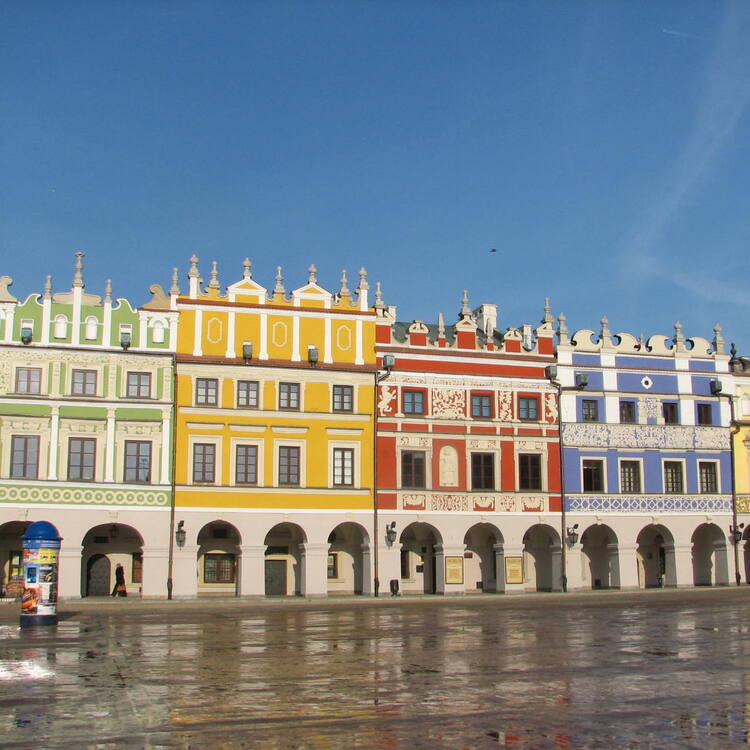 Old City of Zamość in southeastern Poland is an outstanding example of a late 16th-century Central European town designed and built in accordance with Italian Renaissance theories on the creation of “ideal” cities. This innovative approach to town planning was the result of a very close cooperation between the town’s enlightened founder and the distinguished Italian architect Bernardo Morando. The Old City of Zamość today retains its original rectilinear street plan and its unique blend of Italian and Central European architectural traditions, as well as parts of its encircling fortifications.

Located on the trade route linking western and northern Europe with the Black Sea, Zamość was conceived as a trade-based economic centre. From the outset it was intended to be multinational, and had a high level of religious tolerance. It became the tangible reflection of the social and cultural ideas of the Renaissance, which were readily embraced in Poland, as exemplified by the establishment of a university (Zamość Academy) by Jan Zamoyski, the founder and owner of the town. His architect Bernardo Morando’s city plan combined the functions of a residential palace, an urban ensemble, and a fortress, all in accordance with Renaissance concepts.

The Old City of Zamość has two distinct sections: on the west is the Zamoyski palace, and on the east is the town proper, laid out around three squares. The central Great Market Square, located at the junction of the town’s two main axial streets, is enclosed by arcaded merchants’ houses and anchored by a magnificent Town Hall. These and many other notable structures such as the cathedral, arsenal, and fortification gates illustrate a key feature of this great undertaking: a creative enhancement realized through the incorporation of artistic achievements attained in local architecture. The consistent implementation of Morando’s plan over time has resulted in a stylistically homogeneous urban composition with a high level of architectural and landscape values.

Criterion (iv): Zamość is an oustanding example of a Renaissance planned town of the late 16th century, which retains its original layout and fortifications and a large number of buildings of particular interest, blending Italian and Central European architectural traditions.

The Old City of Zamość is an integral and complete example of a private Renaissance town established anew, ‘in cruda radice’, based on Italian architectural theory. Within its boundaries are located all the elements necessary to sustain the Outstanding Universal Value of the 75.03 ha property, including its distinctive rectilinear urban layout with its compositional and functional axes, and the network of streets and squares together with buildings illustrating the fusion of Italian and Central European architectural traditions, among them the Town Hall, the founder’s residence, the Zamość Academy, the churches, and the surviving system of fortifications with gates encircling the city. The property does not suffer from adverse effects of development and/or neglect.

Since the modern town of Zamość grew for the most part outside the old fortifications, and having escaped the vast destruction suffered by many other Polish towns during the Second World War, the Old City of Zamość today exhibits a high degree of authenticity, particularly regarding its location and setting, forms and designs, and materials and substances. The property’s authenticity is evidenced in the conservation of its original urban layout filled with building blocks along with all its key buildings: the founder’s residence, the Academy (still serving as an educational institution), the Town Hall, churches and places of worship representing various religions (constituting symbols of tolerance), and the town’s surviving system of fortifications. Minor modifications carried out in the Baroque period did not disrupt the basic structure and composition of the Renaissance town; on the contrary, they enriched it. The greatest changes to the Renaissance-era layout were introduced in the first half of the 19th century, when the town was designated as a strategic state-owned fortress. In spite of some demolitions and reductions in architectural detail, the fundamental internal structure of the town was not affected. The town’s system of fortifications, however, was modernized using the latest military technical solutions of the time, now only partially extant.

Some elements of the urban infrastructure – the ground transport infrastructure and localised utilities – are of particular concern and may be vulnerable unless planning policies and guidance are rigorously and consistently applied.

The Old City of Zamość is subject to the highest level of legal protection, both at the national level through its inclusion in the National Heritage Register and its status as a Monument of History, and at the local level through local spatial development plans. The property – which is located within a contemporary town that serves as a local administrative, economic, religious, and cultural centre – is under the authority of the local government. Issues related to the protection of the historic area come under the authority of a special department operating within the structures of the municipal council and regional bodies of the national monument protection services.

In order to enhance the conservation of the property, a buffer zone (214.91 ha) has been outlined. The principles of heritage protection, along with details concerning the division of the property and its buffer zone into structural units determining both their purpose and the rules for their protection, are recorded in the town planning register.