The List Monasteries of Daphni, Hosios Loukas and Nea ...
Print

Although geographically distant from each other, these three monasteries (the first is in Attica, near Athens, the second in Phocida near Delphi, and the third on an island in the Aegean Sea, near Asia Minor) belong to the same typological series and share the same aesthetic characteristics. The churches are built on a cross-in-square plan with a large dome supported by squinches defining an octagonal space. In the 11th and 12th centuries they were decorated with superb marble works as well as mosaics on a gold background, all characteristic of the 'second golden age of Byzantine art'. 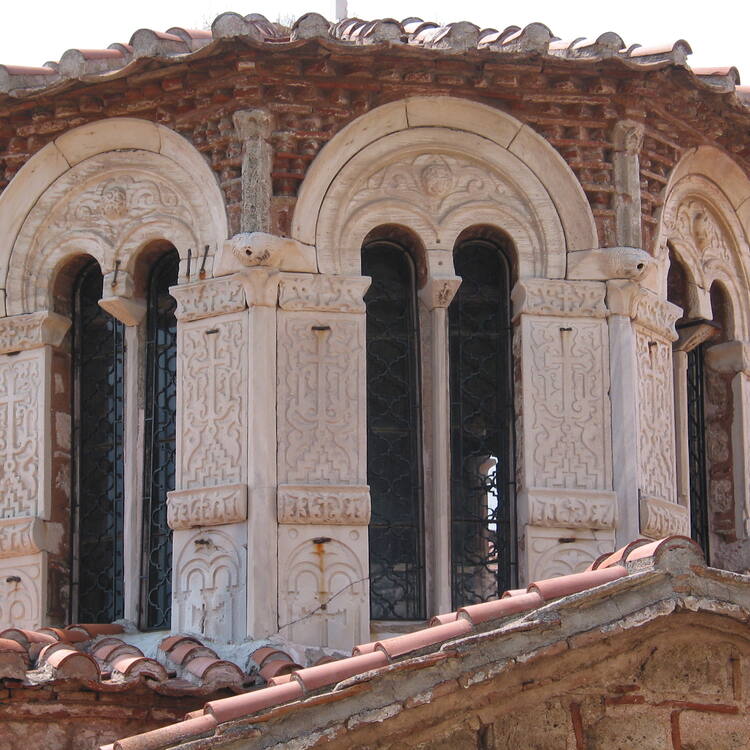 Hosios Loukas, The dome of the church of the Virgin © Lazaros Kolonas

Although geographically distant from each other, these three monasteries of the middle Byzantine period (the first is in Attica, near Athens, the second in Phocida, near Delphi, and the third on the island of Chios, in the Northern Aegean), belong to the same typological series and share the same aesthetic and architectural characteristics. The churches are built on a cross-in-square plan with a large dome supported by squinches defining an octagonal space. In the 11th and 12th centuries they were decorated with superb marble works as well as mosaics on a gold background, all characteristic of the second golden age of Byzantine art.

Criterion (i): The monasteries at Daphni, Hosios Loukas and Nea Moni of Chios represent, with their admirable mosaics on a gold background, unique artistic achievements. On this basis each one of these indisputable masterpieces of Byzantine art could have been included on the World Heritage List on its own merits.

Criterion (iv): These three monasteries are outstanding examples of a type of construction characteristic of the middle period of Byzantine religious architecture. Nea Moni illustrates the most simple expression: an octagonal church with no added spaces. Hosios Loukas and Daphni are more complex. They have a central octagonal space surrounded by a series of bays that form a square. This more elaborate structure defines a hierarchy of volumes and functions and enables the implementation of an extensive iconographic and decorative plan. It is typical of other churches, like Christianou near Kyparissia, Panaghia Likodimou in Athens or Saint Sophia in Monemvasia. The two examples included in the property are, along with Saints Theodoroi of Mystras (included on the World Heritage List in 1989), the most representative by virtue of the perfection of their architecture, the beauty of their mosaics and paintings and their more satisfactory state of conservation.

All three monuments include all the essential elements both concerning their architectural form, and their decoration. Each of them forms part of a monastic complex and a well-preserved natural environment (buffer zone).

Concerning the Daphni monastery, although the earthquake of 1999 caused damages to the monument, appropriate measures were taken immediately, so that today the property is in good condition. The Katholikon (main church) of Nea Moni remains intact with the exception of a few restoration interventions carried out in the late 19th century, after the earthquake of 1881. It retains both its initial architectural shell as well as its interior and exterior decoration. The monastery complex of Hosios Loukas and particularly its namesake Katholikon (main church), preserves its initial 11th-century form intact. This includes architectural and decorative elements, namely the mosaics, frescoes, architectural sculptures, marble revetment and pavements. Few were the losses or later repairs during the centuries, as in the case of the dome that collapsed and was rebuilt probably in the 18th century.

The principal risks to the three monasteries are natural disasters such as forest fire (Nea Moni) and earthquake (Daphni and Nea Moni). Daphni has been subject to development pressures in the past.

All the three monuments conserve their authenticity expressed mainly by their form and design, the construction materials, their decoration, and the spirit and feeling of the place. More specifically, the Daphni monastery has preserved all its initial architectural and decorative elements. These are expressed in the construction of the Katholikon (main church), with courses of stone enclosed by bricks, the wealth of decorative brickwork surrounding the windows and the interior decoration consisting of wall mosaics and decorative marble, which have been enhanced after the restoration and conservation work. The Katholikon (main church) of Nea Moni has preserved its authentic mosaic decoration and the marble revetment of the lower parts, even its initial pavement. The church itself remains intact as to the construction materials and the initial architectural plan. The conservation and restoration work aims at restoring and consolidating the initial decorative and structural elements. Interventions or damages to the Katholikon (main church) of Hosios Loukas over the centuries were minimal. The most important of these occurred during the War of Independence (1821). The monument was restored by well-known Byzantinists during the 20th century. In particular, damages were restored in an exemplary manner, newer interventions were removed, and initial elements of the church (such as window panels of plaster) were revealed. Thus, the monument was rehabilitated, with few additions, in its initial form, while the authenticity of the whole was preserved.

All three properties are protected by the provisions of the Archaeological Law 3028/2002 “On the Protection of Antiquities and Cultural Heritage in general”, and by separate ministerial decrees published in the Official Government Gazette. Protection and management are carried out by the Ministry of Culture, Education and Religious Affairs through the responsible regional services (Ephorates of Antiquities).

Daphni Monastery: The Ephorate of Antiquities of West Attika, Pireus and Islands exercises strict construction control and is collaborating with the responsible services for the amelioration and specialization of protection measures of the property. After the earthquake of 1999, which caused extended damages to the monument, a wide program of restoration works was carried out, in the context of the 2nd and 3rd Community Support Framework. The works were carried out both in the Katholikon (main church), and in the wings of cells of the inner courtyard, as well as in the refectory, in the west chapel, in the cistern, and in the bathhouse. Special care was given to the restoration of the mosaics. As a result of these works, the site was partially reopened to the public, since 2008, with free entrance. Restoration works continues on the mosaics, on the upper part of the masonry and on the dome of the Katholikon (main church), whereas the first phase of the restoration of the fortification walls is complete. The works will be carried out in the frame of the National Strategic Reference Framework, and after their completion, the monument will be entirely restored.

The funding resources of the monument come from the national budget, the Community Support Framework and the National Strategic Reference Framework. An audio guide program will begin soon while there is a provision for the monument to be accessed by persons with special needs. The construction of modern lavatory facilities for visitors (including those with special needs) as well as the installation of an informative signpost for the visually impaired visitors have been completed.

The protection of the monument against natural disasters is ensured by the installation of a lightning rod, by the fire extinguishing system, by the system of instrumental surveillance (monitoring) by the continuous guard of the site in combination with an alarm system and a closed circuit surveillance system.

At the moment, educational programs are being elaborated and in the near future new guidebooks will be printed.

Financing for the conservation and protection of the monument derives from national funds of the Ministry of Culture, Education and Religious Affairs, European resources and sponsoring institutions and corporations. Works of preservation of the mosaics and restoration of the Katholikon (main church) have already been implemented. The primary objective is to preserve the good condition of the Katholikon (main church) as well as to restore the surrounding buildings of the monastery.

The necessary precautions against forest fires are being taken by the responsible authorities (fire brigade).

Main objectives are also the following: the promotion of the monument to the public, the offer of educational programs for children, the installation of info kiosks for the visitors and of facilities infrastructure.

The cooperation with the University of the Aegean (Department of Cultural Technology and Communication, School of Social Sciences) for the elaboration of the management plan was not successful. Therefore, there is no management plan at the moment.

The Ministry of Culture, Education and Religious Affairs elaborates all the preservation and rehabilitation studies. After approval by the competent collective interdisciplinary bodies, studies are carried out under the direct supervision of the Ephorate of Antiquities of Boeotia. Restoration and enhancement projects within the property are funded either by the state budget or co-financed by the Hellenic State and the European Union.

The protection of the monument is ensured by the continuous guard of the site. In the exhibition rooms of the property selected items are presented to the visitors. Furthermore, the property has all the necessary amenities (signposting, museum shop and canteen).

Finally, consolidation projects carried out on all three monuments have strengthened their resistance in case of an earthquake.