This sacred site was one of the greatest Mayan centres of the Yucatán peninsula. Throughout its nearly 1,000-year history, different peoples have left their mark on the city. The Maya and Toltec vision of the world and the universe is revealed in their stone monuments and artistic works. The fusion of Mayan construction techniques with new elements from central Mexico make Chichen-Itza one of the most important examples of the Mayan-Toltec civilization in Yucatán. Several buildings have survived, such as the Warriors’ Temple, El Castillo and the circular observatory known as El Caracol. 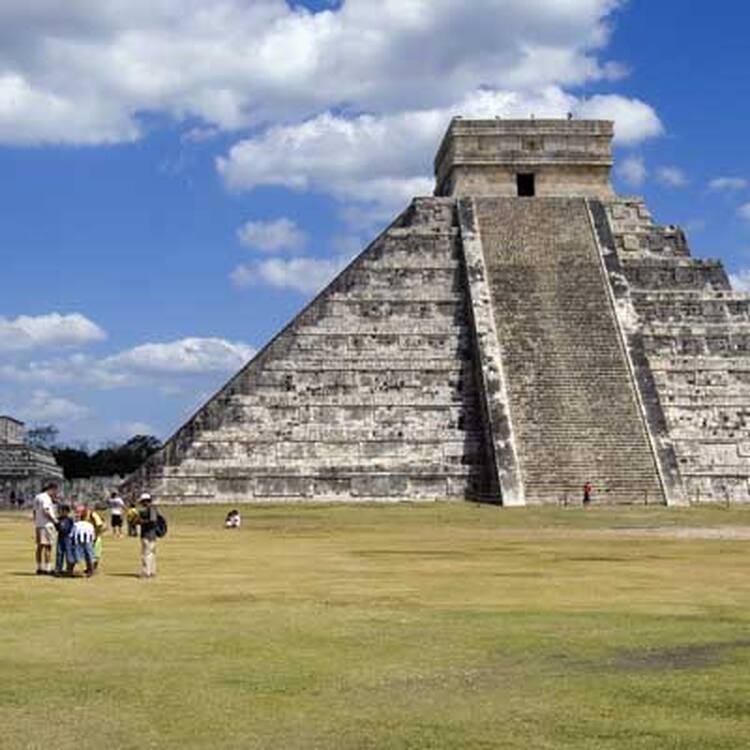 The town of Chichen-Itza was established during the Classic period close to two natural cavities (cenotes or chenes), which gave the town its name "At the edge of the well of the Itzaes". The cenotes facilitated tapping the underground waters of the area. The dates for this settlement vary according to subsequent local accounts: one manuscript gives 415-35 A.D., while others mention 455 A.D. The town that grew up around the sector known as Chichen Viejo already boasted important monuments of great interest: the Nunnery, the Church, Akab Dzib, Chichan Chob, the Temple of the Panels and the Temple of the Deer. They were constructed between the 6th and the 10th centuries in the characteristic Maya style then popular both in the northern and southern areas of the Puuc hills.

The second settlement of Chichen-Itza, and the most important for historians, corresponded to the migration of Toltec warriors from the Mexican plateau towards the south during the 10th century. According to the most common version, the King of Tula, Ce Acatl Topiltzin Quetzalcoatl, or Kukulkan as the Maya translated the name, reportedly took the city between 967 A.D. and 987 A.D.

Following the conquest of Yucatán a new style blending the Maya and Toltec traditions developed, symbolizing the phenomenon of acculturation. Chichen-Itza is a clear illustration of this fusion. Specific examples are, in the group of buildings to the south, the Caracol, a circular stellar observatory whose spiral staircase accounts for its name, and, to the north, El Castillo (also known as the Temple of Kukulkan). Surrounding El Castillo are terraces where the major monumental complexes were built: on the north-west are the Great Ball Court, Tzompantli or the Skull Wall, the temple known as the Jaguar Temple, and the House of Eagles; on the north-east are the Temple of the Warriors, the Group of the Thousand Columns, the Market and the Great Ball Court; on the south-west is the Tomb of the High Priest.

After the 13th century no major monuments seem to have been constructed at Chichen-Itza and the city rapidly declined after around 1440 A.D. The ruins were not excavated until 1841 A.D.

Criterion (i) : The monuments of Chichen-Itza, particularly in the northern group, which includes the Great Ball Court, the Temple of Kukulkan and the Temple of the Warriors, are among the undisputed masterpieces of Mesoamerican architecture because of the beauty of their proportions, the refinement of their construction and the splendor of their sculpted decorations.

Criterion (ii): The monuments of Chichen-Itza exerted an influence throughout the entire Yucatan cultural zone from the 10th to the 15th century.

Criterion (iii): Chichen-Itza is the most important archaeological vestige of the Maya-Toltec civilization in Yucatan (10th-15th centuries).

From its abandonment during the 15th century, Chichen-Itza underwent a process of gradual deterioration until the first excavations at the site began more than a century ago. Nevertheless, the excellent materials and building techniques used by the Maya in the construction of the buildings secured that the architectonic, sculptural and pictorial essence of Chichen-Itza would be conserved through the centuries.

Until today the elements that convey the Outstanding Universal Value of the property have been preserved. However, discoveries at the site that are not considered in the original protective polygon should be officially included. Furthermore, there are a number of threats to the integrity of the site, derived from excessive use or inadequate infrastructure development to provide services, which will require constant control in order to avoid negative impacts.

The condition of authenticity met by the site at the moment of its inscription was maintained. However, the use of the property as stage for unrelated cultural events has sparked a discussion concerning the impact of these activities on the conservation and authenticity of the site. In order to ensure that use and function, as well as the character of the site are maintained, enforcement of regulatory measures and protection mechanisms are required.

Chichen-Itza is protected by the 1972 Federal Law on Monuments and Archaeological, Artistic and Historic Zones and was declared an archaeological monument by a presidential decree in 1986.

The site remains open to the public 365 days of the year, and received a minimum of 3.500 tourists per day, a number which can reach 8.000 daily visitors in the high season. This means that the site needs constant maintenance and attention in order to avoid deterioration of its prehispanic fabric.

Yucatan is the only state in Mexico where two institutions are involved in the management of archaeological sites: the National Institute of Anthropology and History (INAH), which is in charge of the care and conservation of the archaeological site, and the Board of Units of Cultural and Tourism Services of the State of Yucatan.

The Board was created in 1987 in order to manage the Units of Cultural and Tourism Services of the archaeological sites of Uxmal, Chichen-Itza, Kabah, Sayil, Labna, Zibichaltún and the Caves of Loltún and Balancanche.

Medium and long-term activities at Chichen-Itza, including investigation, conservation, thematic interpretation, administration and operation of the site, are addressed in the "Management Plan of the Pre-hispanic City of Chichen-Itza". The purpose of the Plan is to articulate and coordinate the activities at the site, especially those geared towards the mise en valeur of the property and the generation of participation of the different sectors involved in the management, including the general public.

No emergency plan exists for the site and there is no long term monitoring of the state of conservation, due to lack of personnel. This puts the site at risk from natural and anthropogenic disasters, as well as from longer term degradation. Threats like fire and lime stone erosion have been highlighted. Sustainable implementation of the defined planning tools and the allocation of resources to conservation and management are necessary means to ensure the conservation of the Outstanding Universal Value of the property in the long term.