Founded in 315 B.C., the provincial capital and sea port of Thessalonika was one of the first bases for the spread of Christianity. Among its Christian monuments are fine churches, some built on the Greek cross plan and others on the three-nave basilica plan. Constructed over a long period, from the 4th to the 15th century, they constitute a diachronic typological series, which had considerable influence in the Byzantine world. The mosaics of the rotunda, St Demetrius and St David are among the great masterpieces of early Christian art. 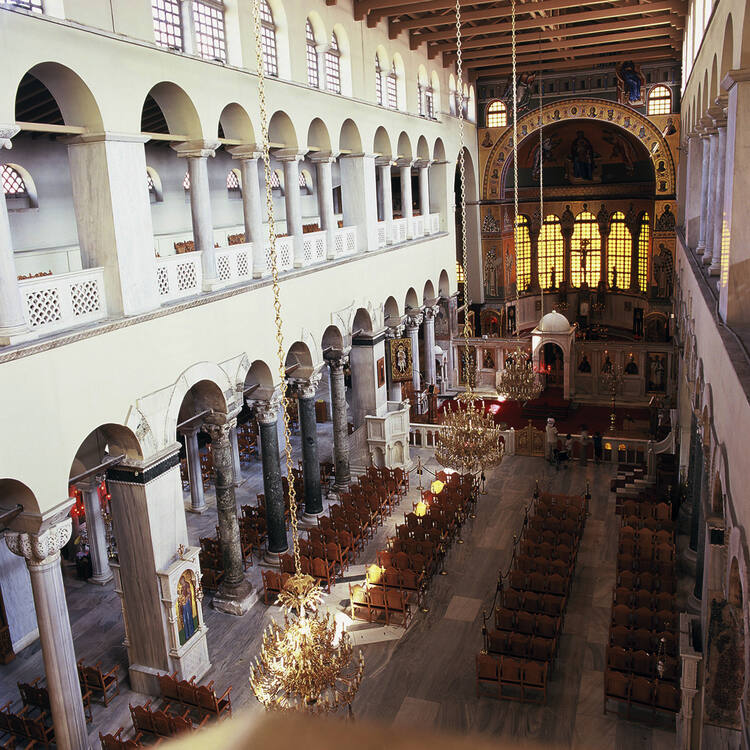 Founded in 315 BC, the provincial capital and sea port of Thessalonika was one of the first bases for the spread of Christianity. Among its Christian monuments are fine churches, some built on the Greek cross plan and others on the three-aisled basilica plan. Constructed over a long period, from the 4th to the 15th century, they constitute a diachronic typological series, which had considerable influence in the Byzantine world. The mosaics of Thessalonika’s monuments (such as the Rotunda, Saint Demetrius and Hosios David [Latomou Monastery]) are among the great masterpieces of Early Christian art.

The monuments of Thessalonika inscribed on the World Heritage List are public edifices of various functions, religious, secular, military, including the 4 km long city walls. Because of their outstanding design and major artistic value these monuments are included among the most significant of the Byzantine period. Throughout the Byzantine era, the city constituted a cultural centre that determined the developments not only in immediately surrounding but also in neighbouring areas. It played an active or even competitive role in artistic trends originating in Constantinople.

The monuments of Thessalonika reveal a continuous artistic exchange with the greatest cultural centres of each era (Rome, Constantinople). The city itself was an important artistic centre, from its foundation and throughout the Byzantine period. Wall painting ensembles, mosaics and frescoes, preserved in Thessalonika’s monuments, represent some of the major artistic trends, that have been developed in Byzantine monumental painting from its beginnings (the Rotunda, Saint Demetrius, Hosios David), through the first period after iconoclasm (Saint Sophia) and the Comnenian period (Hosios David frescoes) to its culmination known as the Palaeologan Renaissance (late Byzantine period). To this last period belong significant monuments such as the Holy Apostles, the chapel of Saint Euthymios in the Church of Saint Demetrius, Saint Nikolaos Orphanos, Saint Panteleimon, the Transfiguration of the Saviour, Saint Aikaterini, Prophitis Ilias, the Katholikon (main church) of the Vlatadon Monastery which reflect all the tendencies of the Palaeologan Renaissance.

Criterion (i): The mosaics of the Rotunda, Saint Demetrius and Hosios David’s (Latomou Monastery) are among the great masterpieces of Early Christian art.

Criterion (ii): The influence of the Thessalonian churches on the development of the monumental arts was considerable first in the Byzantine and later the Serbian world, whether in the Early Christian period, the Middle Byzantine era or the Palaeologan Renaissance.

Criterion (iv): The Christian monuments of Thessalonika are outstanding examples of churches built according to central, basilical and transitional architectural types over a period going from the 4th to the 15th century. For this reason they constitute a series which is a typological point of reference.

All monuments are preserved intact, or as in the case of the city walls, with minimal losses. The boundaries are adequate to protect the fabric of the monuments and there are buffer zones for some of them. The continual use of the buildings (from their foundation until today) proved beneficial to their state of conservation, despite certain inevitable interventions.

There is a risk of natural disasters such as earthquakes while the fact that the monuments are all in a developing and changing urban area may lead to pressures from time to time.

All monuments, despite any interventions over the centuries, maintain all elements (architecture and decoration) of their initial phase. In the first quarter of the 20th century the monuments commenced to be restored and low quality recent interventions or additions were removed (e.g. the porch of the Church of the Holy Apostles and the buttresses of the church of Prophitis Ilias). Minor restoration projects that were always documented were carried out (e.g. the south dome of the narthex of the Church of Panagia Chalkeon). Exceptionally, a large scale restoration was carried out in the church of Saint Demetrius, after the disastrous fire of 1917. During the last 30 years small scale rescue restorations were generally carried out. The restoration and consolidation work as well as landscaping realised until now in the monuments of Thessalonika contributed to their maintenance and the enhancement of their authenticity.

The properties are protected by the provisions of the Archaeological Law 3028/2002 “On the Protection of Antiquities and Cultural Heritage in general” and by separate ministerial decisions published in the Official Government Gazette. Protection and management are carried out by the Ministry of Culture, Education and Religious Affairs through the responsible regional service (Ephorate of Antiquities of Thessaloniki City). The specific terms of protection are defined in detail by separate ministerial decrees for each monument.

The use of the Byzantine churches is granted to the Church of Greece (Saint Sophia, Saint Demetrius, Acheiropoietos, Saint Panteleimon, the Transfiguration of the Saviour, the Holy Apostles, Saint Aikaterini, Prophitis Ilias, Panagia Chalkeon) and to the Ecumenical Patriarchate (Saint Nikolaos Orphanos, Hosios David [Latomou Monastery], Vlatadon Monastery).

Restoration of the roof of Hosios David (Latomou Monastery) and landscaping of the surrounding area in 2002, launched the last series of conservation interventions (3rd Community Support Framework). Subsequently the following works were carried out: a) landscaping of the surrounding area in sections of the walls of Heptapyrgio, of the byzantine Bath, of Prophitis Ilias, b) consolidation of the mosaics in Rotunda, Saint Demetrius, the Holy Apostles, c) consolidation works in Acheiropoietos, Rotunda minaret, Heptapyrgio, Tower of Trigonio, and d) exemplary restoration of Saint Panteleimon church, awarded the Europa Nostra prize. Heptapyrgion’s use has changed: it now houses the offices of the Ephorate of Antiquities of Thessaloniki City and two permanent exhibitions. Furthermore, Heptapyrgio is open to visitors with free entrance. It is also an area for outdoor events. The Tower of Trigonio is open to the public.

In the context of the Peripheral Development Corporate Plan further restoration works are carried out on the monuments. The Ephorate of Antiquities of Thessaloniki City in collaboration with the Aristotle University of Thessaloniki implements also the project “Prospelasis” which is intended to facilitate access of people with disabilities. The aim of the Ephorate of Antiquities of Thessaloniki City is to create better conditions in order to facilitate the accessibility of monuments not only to scientific groups but also to a wider public. Daily effort is required for the protection and enhancement of the monuments as they are integrated in a modern city, and consequently burdened by human activity.