The holy city of Teotihuacan ('the place where the gods were created') is situated some 50 km north-east of Mexico City. Built between the 1st and 7th centuries A.D., it is characterized by the vast size of its monuments – in particular, the Temple of Quetzalcoatl and the Pyramids of the Sun and the Moon, laid out on geometric and symbolic principles. As one of the most powerful cultural centres in Mesoamerica, Teotihuacan extended its cultural and artistic influence throughout the region, and even beyond. 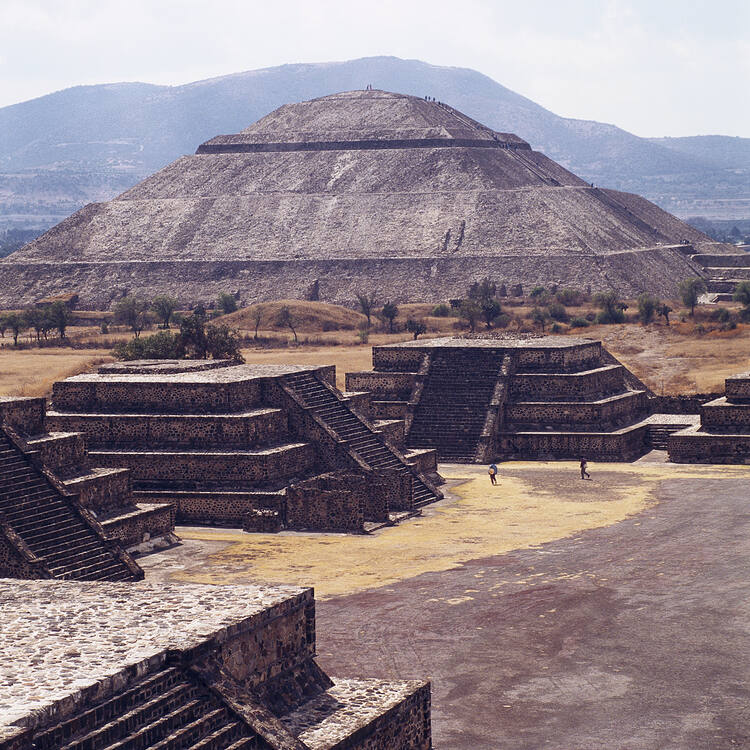 Pyramid of the Sun © Sacred sites

Teotihuacan and its valley bear unique testimony to the pre-urban structures of ancient Mexico. Human occupation of the valley of Teotihuacan began before the Christian era, but it was only between the 1st and the 7th centuries A.D. that the settlement developed into one of the largest ancient cities in the Americas, with at least 25,000 inhabitants.

The city’s urban plan integrated natural elements of the Teotihuacan Valley, such as the San Juan River, whose course was altered to cross the Avenue of the Dead. This north-south oriented main reference axis of the city is lined with monumental buildings and complexes, from which the Pyramids of the Sun and the Moon, as well as the Great Compound with the Temple of Quetzalcoatl (also known as Temple of the Plumed Serpent) stand out. One characteristic of the city’s civil and religious architecture is the "talud-tablero", which became a distinctive feature of this culture. Furthermore, a considerable number of buildings were decorated with wall paintings where elements of worldview and the environment of that time were materialized. The city is considered a model of urbanization and large-scale planning, which greatly influenced the conceptions of contemporary and subsequent cultures.

At the peak of its development the city stretched out over 36 km2. Outside the ceremonial centre, which, despite its imposing size, represents only 10% of the total surface, excavations have revealed palaces and residential quarters that are of great interest at, for example, La Ventilla, Tetitla, Zacuala, and Yayahuala to the west, and Xala and Tepantitla to the east. The city was razed by fire and subsequently abandoned during the 7th century.

Criterion (i): The ceremonial ensemble of Teotihuacan represents a unique artistic achievement as much by the enormous size of the monuments (the Pyramid of the Sun, built on a 350 m² terrace, measures 225 x 222 meters at the base, and is 75 meters high, for a total volume of 1 million m³) as by the strictness of a layout based on cosmic harmony. The art of Teotihuacans was the most developed among the classic civilizations of Mexico. Here it is expressed in its successive and complementary aspects: the dry and obsessive geometry of the pyramids of the Sun and the Moon contrasts with the sculpted and the painted decor of an exceptional richness of the Pyramid of Quetzalcoatl, the Plumed Serpent.

Criterion (ii): The influence of the first of the great civilizations of Mesoamerican classic civilizations was exerted over the whole of the central region of Mexico, in Yucatán, and as far away as Guatemala (the site of Kaminaljuyu) during the period of Teotihuacan III.

Criterion (iii): Much larger than the narrow zone of the ceremonial center, the archaeological site of Teotihuacan corresponds to a city of at least 25,000 inhabitants. Teotihuacan and its valley bear unique testimony on the pre-urban structures of ancient Mexico.

Criterion (iv): Lining the immense Avenue of the Dead, the unique group of sacred monuments and places of worship in Teotihuacan (the Pyramids of the Sun, the Moon and Quetzalcoatl and the Palaces of Quetzalmariposa, the Jaguars, of Yayahuala and others) constitutes an outstanding example of a pre-Columbian ceremonial center.

Criterion (vi): Following the destruction and abandonment of the city towards 650 A.D., the ruins were imbued with legend. The Aztec name of Teotihuacán means "the place where gods were created". According to writings from the 16th century, the sacrifices practiced by Moctezuma every twenty days on the site attested to the persistence of beliefs, which made Teotihuacan a sacred place of exceptional value.

The Pre-Hispanic City of Teotihuacan fully preserves its monumentality, urban design and artistic wealth, as well as the relationship of the architectural structures with the natural environment, including its setting in the landscape. This is due to the maintenance, conservation and permanent protection the site has received. However, natural factors like rain, wind and solar radiation constantly affect the site and its elements, and are considered to be the most important threat. Not all conservation attempts in the past were successful and some elements of the site were negatively affected by the use of inadequate materials (e.g. concrete and polymers). This highlights the need for conservation guidelines for interventions, as requested by the World Heritage Committee in its 36th session (2012), as well as for plans for preventive conservation and monitoring at the site. A further serious threat is the development pressure around the site that is constantly on the rise.

Located 48 km northeast of Mexico City, Teotihuacan is one the archaeological sites with the longest history of exploration in Mexico. The first surveys date from 1864, and the first excavations from 1884. Certain monuments were restored from 1905 to 1910, such as the Pyramid of the Sun, for which its discoverer Leopoldo Batres arbitrarily reconstituted a fifth tier. Since 1962, archaeological research has been coordinated by the National Institute of Anthropology and History (INAH), which, while encouraging spectacular discoveries (Palacio de Quetzalmariposa, the cave under the Pyramid of the Sun), has instigated a more rigorous policy concerning identification and supervision of excavations in the immediate environs of the ceremonial zone.

While some of the earlier reconstruction work, dating from the early years of the last century, is questionable in contemporary terms, it may be considered to have a historicity of its own now. In general terms, it can be said that the condition of authenticity of the expressions of the Outstanding Universal Values of Teotihuacan, which can be found in its urban layout, monuments and art, has been preserved until today.

Teotihuacan is under the custody of the National Institute of Anthropology and History (INAH), which is an agency of the National Council for Culture and the Arts (CONACULTA) and the Ministry of Public Education (SEP). The site is legally protected by the Mexican Federal Law on Monuments and Archaeological, Artistic and Historical Zones of 1972. The law establishes public ownership of all archaeological properties, even if these are situated on privately owned lands. The presidential decrees of 1907 and 1964 that declared the Archaeological Monuments Zone at Teotihuacan were superseded by a new decree in 1988, which defined two additional protective zones (B and C) and augmented the protected area to a total of more than 3381 ha.

To be able to extend the site's buffer zone even further, land surrounding the archaeological zone was acquired over the last decade. Recently, important advances were made in the negotiations with more land owners in order to extend the zone.

In coordination with the municipalities of Teotihuacán de Arista and San Martín de las Pirámides a joint municipal Urban Development Plan and Urban Image Regulations were developed and published in 2008 and 2009 respectively. The documents recognize the archaeological site as a driving force of development that needs protection.

In 2004 a process of consultation and integration of existing information was initiated, which culminated in 2009 with the publication of the Management Plan 2010-2015 for the Archaeological Monuments Zone of Teotihuacan. The document defines a management policy and establishes specific goals for the comprehensive protection and conservation of the site and its components. Furthermore, the plan establishes a work outline in terms of research, preservation, diffusion, community involvement and maintenance.

Sustainable implementation of the defined planning tools and the allocation of resources to conservation and management are necessary means to ensure the conservation of the Outstanding Universal Value of the property in the long term.