The List Monuments of Oviedo and the Kingdom of the ...
Print

In the 9th century the flame of Christianity was kept alive in the Iberian peninsula in the tiny Kingdom of the Asturias. Here an innovative pre-Romanesque architectural style was created that was to play a significant role in the development of the religious architecture of the peninsula. Its highest achievements can be seen in the churches of Santa María del Naranco, San Miguel de Lillo, Santa Cristina de Lena, the Cámara Santa and San Julián de los Prados, in and around the ancient capital city of Oviedo. Associated with them is the remarkable contemporary hydraulic engineering structure known as La Foncalada. 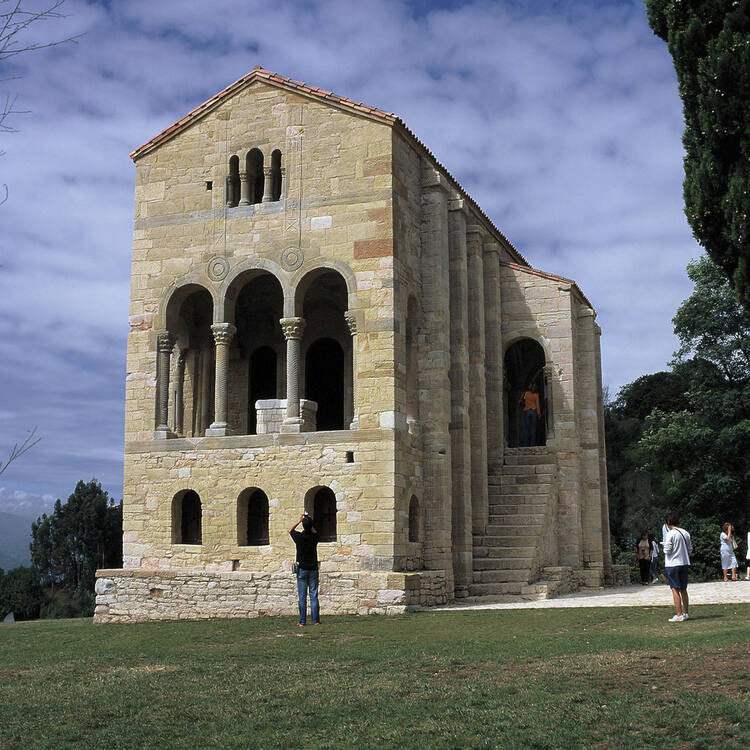 Monuments of Oviedo and the Kingdom of the Asturias © UNESCO

During the 9th century, the flame of Christianity was kept alive in the Iberian peninsula in the small Kingdom of the Asturias where an innovative Pre-Romanesque architectural style was created that was to play a significant role in the development of religious architecture of the peninsula. The Churches of Santa Maria del Naranco (built between 842-850 under Ramiro I, San Miguel de Lillo (also built under Ramiro I, Santa Cristina de Lena (built around 850), the Camara Santa of Oviedo Cathedral and San Julian de los Prados (popularly called “Santullano” and constructed under Alphonse II, between 791-842), located in and around the capital city of Oviedo, are the most representative examples.  The group also comprises the remarkable structure of hydraulic engineering known as the “Foncalada” that probably dates back to the first half of the 9th century. Historically, this group of buildings bears witness to cultural traditions relating to the Kingdom of the Asturias.

The Foncalada is an outstanding example of hydraulic engineering of the late Middle Ages in working order, based on Roman models.  The architecture of Santa Maria del Naranco takes its inspiration from Late Antiquity and Paleo-Byzantine, as is illustrated in its decorative motifs and iconography, and also in the design of its façades. San Miguel de Lillo retains a decor that reflects a complete record of traditions, expressed in the first original sculpture of the Kingdom of the Asturias.  The Camara Santa of Oviedo Cathedral is a two-storey building similar to the funeral structures of classical Rome.  Indeed, the Camara Santa bears witness to these Roman models reproduced, by Paleo-Christian architecture for its martyr shrines.  Finally, the Santa Cristina de Lena is a unique example of the pre-Romanesque architecture of the Asturias because of its interior distribution and layout.

Overall, these Asturian constructions of small dimensions with a total surface of 815.72 m2 share almost all the characteristics of European architecture of that time : co-existence of multiple typological design, a certain spatial compartmentalization, evident from exterior vestiges, use of material similar to camouflage, rather sombre interiors, heterogeneous decoration based on the panoply of Late Antiquity. These characteristics are due for the most part to their promoters: small monastic communities.

Criterion (i) : Pre-Romanesque Asturian architecture represents a unique artistic achievement which is neither a metamorphosis of Paleo-Christian art nor a feature of Carolingian art. These churches which are of basilical layout, entirely vaulted, and which make use of columns instead of piers, have very rich decors inspired from Arab elements as well as shapes which associate them with the great sanctuaries of Asia Minor.

Criterion (ii) : Asturian monuments have exerted decisive influence on the development of medieval architecture in the Iberian peninsula.

Criterion (iv) : The palaces and churches in the surroundings of Oviedo provide eminent testimony to the civilization of the small Christian Kingdom of the Asturias during the splendour of the Emirate of Cordoba.

These Pre-Romanesque monuments constitute a representative ensemble of the non-cult churches and buildings of this artistic style conserved in the Asturias. Each of the six elements inscribed on the World Heritage List illustrate a specific aspect of Pre-Romanesque Asturia.

Santa Maria del Naranco is a former royal residence built on two levels. Excavations in 1930-1934 revealed the existence of baths in one of the lower rooms. This rectangular Ramirian palace which was converted into a church between 905 and 1065 and which has exterior stairways at the north end and a balcony at the south end, opens to the east and west via loggias which act as lookout points poised upon bays with openings on all three sides.  Its origins date back to Late Antiquity and Paleo-Byzantine times, as is illustrated not only by its decor and iconography, but also the design of its façades.

San Miguel de Lillo, designed as a church right from the very start, has only retained the first two admirably balanced bays of an ambitious building which bears a strong resemblance to the Naranco Palace.  It conserves a decoration bearing testimony to a complete record of traditions, reflected in the first original sculpture of the Kingdom of the Asturias.

Although it is the chapel of a royal domain of Ordono I, Santa Cristina de Lena is a harmonious but smaller version of these outstanding creations, and embodies the final phase of the incomparable Asturian architecture between 850 and 866.  San Julian de los Prados possesses a carved and minimal decor, as it only has a series of arches counting eight capitals, possibly the transformation of a Visigoth structure. The interior walls are covered with paintings. Most of the ones on the north and south walls have disappeared over time, but a sufficient number remain to be able to decipher the iconography, for the most part classical, but however not allowing a full interpretation.

With regard to the San Julian de los Prados and Santa Maria de Naranco Churches, the constructions are conserved in their entirety and original state, with the exception of ad hoc transformations or modifications over time. Thus, San Julian de los Prados only retains one practicable entrance, by the west porch, while originally, this church numbered four other doors. With regard to Santa Maria del Naranco, the principal modification concerns the disappearance of a double-hung oriel window, which was located against the south façade with only the plan and the beginnings of the lower foundations remaining.

The Camara Santa of Oviedo Cathedral and the Santa Cristina de Lena Church have undergone changes, notably with regard to their roofing.  Concerning the Camara Santa, its wooden roof was dismantled in the 12th century and replaced by a barrel vault supported by transverse arches, resting on columns with drums that have carved apostles, and considered as one of the heights of Spanish Romanesque sculpture.  Concerning Santa Cristina de Lena, important restoration was carried out from 1892 to 1893. This led to the reconstruction of the vault of the nave in accordance with well-founded archaeological arguments.

The San Miguel de Lillo Church was the monument that underwent the most important transformation.  At the end of the 11th century the building fell into partial ruin. Only a third of its original structure is preserved: the west side of the building.  During the 12th century it was completed by an eastern chapel of rather crude design.

The different churches occasionally play a pastoral role, notably Santa Cristina de Lena, San Miguel de Lillo and Santa Maria de Naranco. As a parish church, San Julian de los Prdos plays this role permanently. The Camara Santa of the Cathedral, comprising two levels, conserves its funerary role in the crypt of Santa Leocadia. Its first level has been accommodated and converted into a shrine to the Oviedo Cathedral.

The Foncalada conserves three elements integrating the building : the basin, the edicule and the canal thanks to archaeological excavations recently carried out that have restored the monumental magnificence to the building. It is a still functional evidence of the hydraulic engineering architecture of the early Middle Ages.

Most of the historical buildings retain an acceptable degree of authenticity, despite the need for restoration following the 1934 uprising and the Civil War.

All the Pre-Romanesque constructions benefit from the highest heritage protection established by the Spanish legislation. Thus, all are listed Property of Cultural Interest. Moreover, the perimeter for the protection of the monuments covers an area of 660.13ha. The constructions benefit from a protection requiring that any intervention to be carried out within this perimeter needs the prior authorization of the competent administration for the protection of cultural heritage, namely the regional administration of the Principality of the Asturias.

The Pre-Romanesque properties belong to the Catholic Church with the exception of the Foncalada, which is a municipal property belonging to Oviedeo Town Hall.

The competent administrations concerning heritage management, either the State administrations, autonomous regions and the municipality, in addition to the Archbishop of Oviedo, extended their collaboration in 2010 with, notably, the signature of a “Convention for the Conservation of Pre-Romanesque Monuments of the Asturias”, (dated 19 July 2010). All the parties to the Convention are committed to launching concrete interventions in conservation, restoration, research and improvement of the protected domains of each monument, as well as concrete interventions (rehabilitation of buildings) the improvement of their legal protection, based on the adaptation of the municipal laws concerning town planning and better protection of the Pre-Romanesque monuments. This Convention, which is a first concrete step enabling a coordinated management of the Pre-Romanesque monuments, should be maintained.  Moreover, its objectives should be extended to correctly control and coordinate tourism management of these monuments.