With its outstanding natural beauty and two active volcanoes, the park illustrates the entire spectrum of ecosystems, ranging from tropical rainforests to glaciers, with striking contrasts between the snowcapped peaks and the forests of the plains. Its isolation has encouraged the survival of indigenous species such as the mountain tapir and the Andean condor. 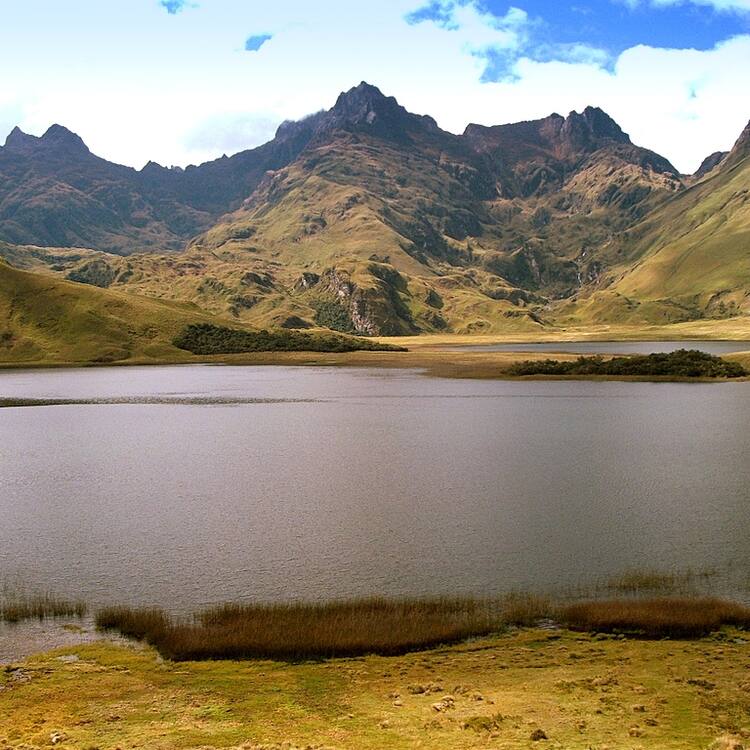 With its outstanding natural beauty and two active volcanoes, the Sangay National Park illustrates within its 270,000 hectares the entire spectrum of ecosystems of Ecuador. These include glacial and volcanic ecosystems, cloud forests, Amazon rainforest, wetlands, lakes, and the fragile moorlands (páramos) and grasslands of the highlands. Geologically, this area is especially important due to the presence of the Sangay volcano, which at 5,140m in altitude is one of the more active volcanoes in the world. The Sangay National Park also provides significant habitat for a rich flora and fauna, including many threatened species such as the Mountain Tapir and the Spectacled Bear.

Criterion (vii): The Sangay National Park contains one of the world’s most complex series of ecological habitats. With an altitudinal range extending from 900 to 5,319 metres above sea level, the park includes three volcanoes: Tungurahua (5,016m), Sangay (5,230m), and Altar (5,319m). These volcanoes have a superlative aesthetic beauty, including a rare combination of grasslands, rainforests and many other fragile habitats. The property includes a vast system of wetlands with 327 lakes, covering a surface of 31.5 km2, which protect and generate environmental services of local, national and regional importance. The park also contains one of the largest areas of páramo (a montane grassland vegetation) occurring in Ecuador.

Criterion (viii): Sangay (a perfect cone-shaped volcano) is notable globally for its long period of continuous activity. The area exhibits a rugged topography with deep, steep-sided valleys, abundant cliffs and many rocky jagged peaks. A number of large rivers, draining eastwards into the Amazon Basin, are characterized by fast and dramatic variations in water level. Run-off is extremely rapid due to high rainfall and steep slopes. Erosion is a constant danger, although controlled by thick forest vegetation. Numerous waterfalls occur, especially in the hanging valleys of the glacial zone along the eastern edge of the Cordillera.

Criterion (ix): The presence of an active volcano means that primary succession is a continual process which influences species composition in a number of special ecosystems in the park, including rainforest, cloud forest, grasslands and moorlands (páramos). For example, many plant species in the páramo, in particular bunch grasses and cushion plants, have adapted to cold weather conditions and have evolved specialised structures for water capture. These areas also provide an excellent example of ongoing succession, where volcanic ash creates fertile soil and new habitats for plant colonization. Although the flora is poorly known, at least 3,000 species are expected to occur in the park and, given the special conditions, probably exhibit a high degree of endemism. At the same time the associated fauna, including a large number of birds and insects, is also expected to be unique. The park comprises two Endemic Bird Areas, the Central Andean páramo (home to some 11 bird species of restricted range), and the Ecuador-Peru East Andes (home to 17 restricted-range species). It is important to note that the high diversity of ecosystems and different vegetation types in the park increases the likelihood of evolutionary changes.

Criterion (x): Natural vegetation has been well conserved and covers around 84.5% of the entire park. With its different ecosystems, the park has the best and least disturbed assemblage of native species in the region. At least 3,000 species of flowering plants are expected to occur in the park and recent reports describe 107 mammal, 430 bird, 33 amphibian, 14 reptile and 17 fish species. Perhaps the highest profile animal is the endangered Mountain Tapir, for which the Sangay Park represents one of its last refuges. The park is also one of the three protected areas with the largest populations of Spectacled Bear, classified as vulnerable. Other emblematic species include the Andean Condor, Andean Cock-of-the-rock, Jaguar and Giant Anteater, classified as vulnerable because its populations are declining in many parts of its range. The Lowland Tapir, another vulnerable rainforest species, only survives in undisturbed areas.

This undisturbed area is sufficiently large (271,925 ha) so that its ecosystems can continue to provide ecological services and undergo natural biological processes. Located in the middle of the Ecuadorian Andes, the area contains no human settlements. Sangay was declared a National Park in 1979 and included in the World Heritage List in 1983. In 1992 the park was extended to the south, increasing its area by 245,800 ha, although this extension was not included as part of the World Heritage property. 15,651 ha of park were excluded in May 2004, but the area inscribed as World Heritage was not reduced. Today, the Park covers an area of 502,105 ha of which 271,925 ha is considered as World Heritage. An executive management plan, approved in 2005, has been used as a management tool for the area and is kept updated.

A large part of the subtropical forest in the lowlands along the eastern border of the Park has been converted to grasslands for cattle ranching and agriculture, and these activities that represent the most significant threats to the property, including the risk of encroachment and livestock entering the property, illegal hunting and fishing are also an ongoing concern. In order to address these problems, the Ministry of Environment is permanently monitoring the area and implements local management actions as part of the management programs of the protected area, with principal objectives to reduce and / or eliminate the threats to the OUV of the property.

The area was placed on the World Heritage List in Danger from 1992 to 2005, mainly due to the construction of the Guamote - Macas road, as well as from threats caused by grazing and illegal hunting.  The park was seriously affected by the building of the road, which now separates the World Heritage site from the southern extension of the park. Impacts included contamination of the Upano River and nearby lakes, the use of dynamite, microclimate changes and indirect effects including new settlements, cattle ranching, illegal hunting and deforestation.  However, in 2005 a new management plan was adopted defining strategies for the restoration of the zones affected by the road, as well as developing participative management of the park in order to reduce conflicts over land use and the relationship between the local population and wildlife.  Following this the park was removed from the List in of World Heritage in Danger.  Many programmes have been implemented in order to improve management efficiency, develop participative community management and increase environmental education, among others.

The Ecuadorian Government recognizes environmental principles in its 2008 Constitution, declaring the State as responsible for the management and administration of its protected areas in order to guarantee biodiversity conservation and to maintain ecosystem ecological functions. The State works with provincial and local governments, other state institutions, non-governmental organizations and communities in order to achieve these goals.