The List ShUM Sites of Speyer, Worms and Mainz
Print

Located in the former Imperial cathedral cities of Speyer, Worms and Mainz, in the Upper Rhine Valley, the serial site of Speyer, Worms and Mainz comprise the Speyer Jewry-Court, with the structures of the synagogue and women’s shul (Yiddish for synagogue), the archaeological vestiges of the yeshiva (religious school), the courtyard and the still intact underground mikveh (ritual bath), which has retained its high architectural and building quality. The property also comprises the Worms Synagogue Compound, with its in situ post-war reconstruction of the 12th century synagogue and 13th century women’s shul, the community hall (Rashi House), and the monumental 12th-century mikveh. The series also includes the Old Jewish Cemetery in Worms and the Old Jewish Cemetery in Mainz. The four component sites tangibly reflect the early emergence of distinctive Ashkenaz customs and the development and settlement pattern of the ShUM communities, particularly between the 11th and the 14th centuries. The buildings that constitute the property served as prototypes for later Jewish community and religious buildings as well as cemeteries in Europe. The acronym ShUM stands for the Hebrew initials of Speyer, Worms and Mainz. 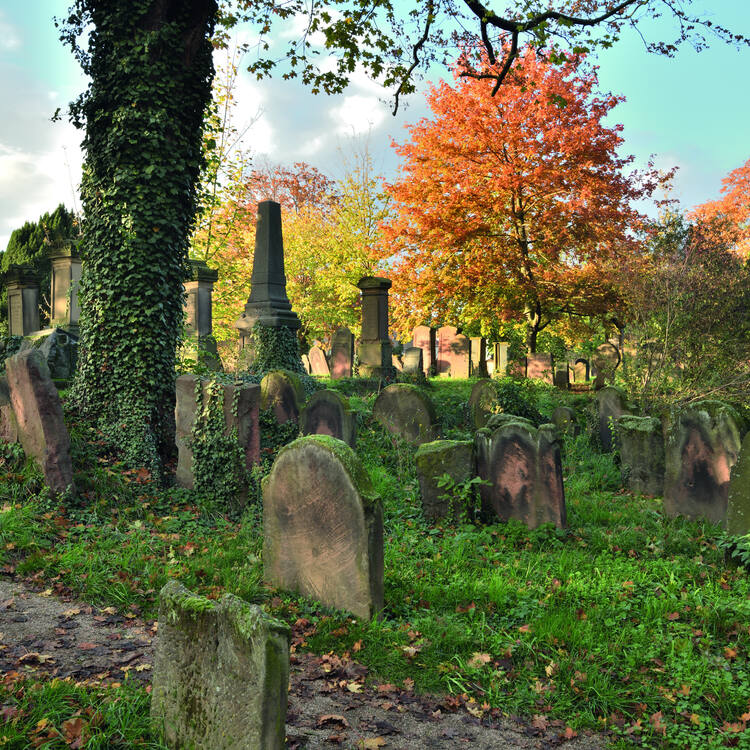 ShUM Sites of Speyer, Worms and Mainz are located in the state of Rhineland-Palatinate, Germany. It is a serial property of four component parts, which are located in the Upper Rhine cathedral cities of Speyer, Worms and Mainz: Speyer Jewry-Court, Worms Synagogue Compound, Old Jewish Cemetery Worms, and Old Jewish Cemetery Mainz. The property is an exceptional testimony of Jewish communal diasporic life, from the 10th century onwards. The community centres and cemeteries date back to the origins of Jewish history beyond the Mediterranean region. ShUM is a traditional Hebrew acronym for the league of prominent qehillot of Ashkenazi Jews in Speyer, Worms and Mainz, made up from the initial letters of their Hebrew city names. The ShUM communities were uniquely connected by joint community ordinances, passed around 1220 and known as the Taqqanot Qehillot ShUM. The fundamentals of Ashkenazic Judaism were established between the 10th and 13th centuries: the scholars of Speyer, Worms and Mainz played a prominent role in this process. Their statutes are vividly reflected in the property by its architecture and the associated development of culture.

The unique community centres and cemeteries have had a lasting impact on the material Ashkenazic culture and are directly and tangibly associated with the creative achievements of the early Ashkenazic scholars.

Criterion (ii): The ShUM Sites of Speyer, Worms and Mainz are pioneering ensembles of Jewish diasporic community centres and cemeteries from the High Middle Ages. Their form and design influenced Jewish architectural design, ritual buildings and burial culture across Central Europe north of the Alps and northern France and England.

Criterion (iii): The ShUM Sites of Speyer, Worms and Mainz provide a unique and exceptional testimony to the formation of European Jewish cultural tradition and identity. There is no other property with a comparable range of elements that can bear witness to such profound developments in the formation phase of the continuing cultural tradition of Ashkenazic Judaism. Their community centres and cemeteries form an exceptional complex of early religious sites that contributed profoundly to the creation of a distinctive cultural identity.

Criterion (vi): The ShUM Sites of Speyer, Worms and Mainz, as the cradle of Ashkenazic Jewish living tradition, are directly and tangibly associated with a major group of the Jewish diaspora which settled in Europe in the High Middle Ages. There is no other location with a comparable range of Jewish community centres and cemeteries to bear witness to the cultural achievements of Ashkenazic Jews. The ShUM sites were treated as prime places of Jewish identity and of reflection on Jewish-Christian relations. The joint ordinances (Taqqanot ShUM) around 1220 constitute the most comprehensive corpus of Jewish community ordinances from medieval Ashkenaz. The writings of ShUM scholars, poets and community leaders during the 10th to the 13th centuries provide evidence of profound influence at a crucial point at the crossroads of cultural developments in Ashkenazic Judaism. Their writings are still part of Jewish tradition to this day.

The ShUM Sites of Speyer, Worms and Mainz include all elements necessary to express the Outstanding Universal Value. Altogether, they represent the closely linked cultural tradition of the qehillot ShUM in the cities of Speyer, Worms and Mainz and reflect the special contribution of each component part to the series. None of the component parts are threatened by development or neglect, each being afforded the strongest possible legal protection under the Monuments Protection Act of Rhineland-Palatinate (in accordance with Article 8 DSchG), and ongoing conservation of the property being adequately funded and well-supported by local communities.

The form and design, essential layout, spatial organisation of the ShUM Sites of Speyer, Worms and Mainz and the respective interrelationships and visual links between the elements within the component parts, together with their architectural forms and designs, reflect the significant and influential development of these sites in the High Middle Ages in a clear and unambiguous manner. Elements are well-preserved according to historical development from the 11th to the 14th centuries, with additions in the 17th century and interventions in the 20th century; post-trauma reconstructions have been carried out respectfully and have retained the heritage significance of the monuments. As early as the late-19th century, measures towards the protection of the substance were introduced. Each component part and their elements have been scientifically investigated from the middle of the 18th century, and their signification increasingly realised. Existing documentation is thorough, and research continuous, thus enhancing knowledge of the property.

The ShUM Sites of Speyer, Worms and Mainz are protected by national instruments of protection. The central instrument for the protection of the property at national level is the Federal Building Code (Baugesetzbuch – BauGB), and the State Building Ordinance of Rhineland-Palatinate (Landesbauordnung – LBauO) and the Monuments Protection Act of Rhineland-Palatinate (Denkmalschutzgesetz – DSchG). Being placed under protection in accordance with Article 8 DSchG, the property enjoys the strongest possible legal protection. The legal principles of regional and urban planning and the municipal legal regulations and statutes provide effective additional protection to the property, so as to guarantee that the attributes of the Outstanding Universal Value are protected from development, particularly in more dynamic urban areas.

A single Management Plan has been developed so that the protection and the integrated and coordinated management of the property are ensured. For implementing this plan, centrally coordinated management and monitoring groups have been organised in cooperation with the owners and other stakeholders. The cooperation of all those involved guarantees that statutory and legal provisions will be respected, and that ShUM Sites of Speyer, Worms and Mainz will be sustainably protected.