Amiens Cathedral, in the heart of Picardy, is one of the largest 'classic' Gothic churches of the 13th century. It is notable for the coherence of its plan, the beauty of its three-tier interior elevation and the particularly fine display of sculptures on the principal facade and in the south transept. 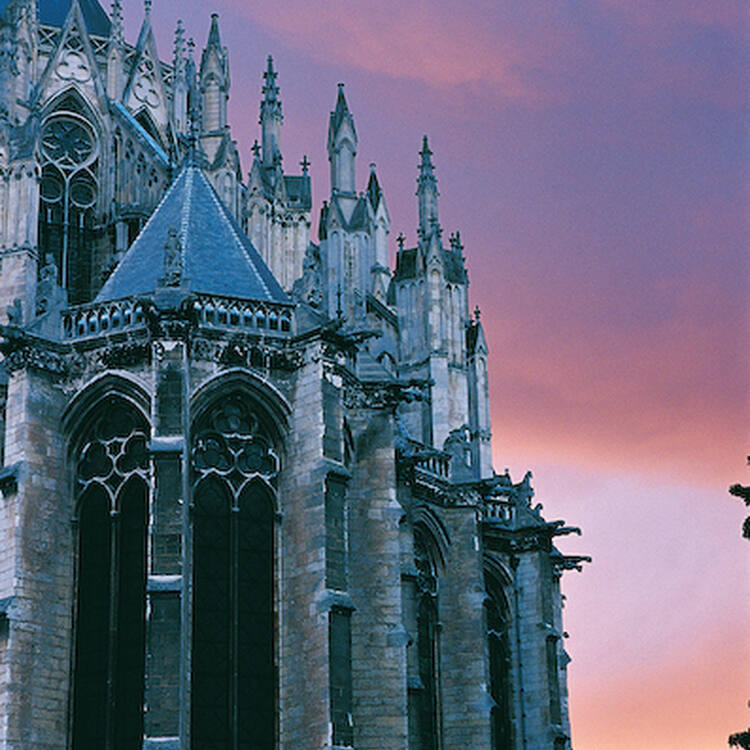 Located in the Hauts-de-France region, in the Department of the Somme, Amiens Cathedral is one of the largest churches in France and one of the most complete 13th century Gothic churches. The rigorous coherence of its plan, with the perfect symmetry of the nave and choir on either side of the transept, the beauty of its three-tier interior elevation, the audacious lightness of its structure that marks a new stage towards the conquest of luminosity, the wealth of its sculpted decoration and its stained glass makes it one of the most remarkable examples of medieval architecture.

Amiens Cathedral was built in less than a century with a high degree of continuity, the master builders being united by strong links (Robert de Luzarches (1220-1223), then his assistant, Thomas de Cormont (1223-1228), then his son, Renaud (1228-1288)). The unity of its conception and realization significantly testify to the values associated with this example of a remarkably conserved Gothic cathedral.

Criterion (i): Amiens Cathedral, mainly built between 1220 to 1288, is a masterpiece of Gothic architecture for the beauty of its interior elevation, its prodigious sculpted decoration and its stained glass.

Criterion (ii): Amiens Cathedral exercised an important influence on the later development of Gothic architecture. Several of the solutions retained at Amiens heralded the advent of the flamboyant style in monumental architecture and sculpture.

Throughout the centuries, Amiens Cathedral has preserved its architectural expression and its cultural functions. The attributes that express its Outstanding Universal Value present a remarkable intactness. All the key architectural elements are included within the boundaries of the property and are in a good state of conservation.

Amiens Cathedral possesses excellent authenticity and significantly illustrates the radiating Gothic style that marked the 13th century. Numerous evolutive episodes over the centuries that followed have marked the building without changing its nature. From 1292 to 1375, the cathedral was enriched with a series of chapels built between the buttresses of the side aisles. With the spire constructed above the transept crossing, the choir screen and the splendid canonical sculpted wood stalls, the cathedral assumed, at the end of the Middle Ages, the physiognomy by which it is known today. Minor restorations during the Renaissance and in the 18th century, in particular inside the cathedral, enriched the decor and consolidated the building. On the whole, the cathedral was spared from two main episodes of vandalism, the wars of religion and the French Revolution, practically causing no damage.  It was restored in the 19th century by Eugène Viollet-le-Duc, opening up the choir with major restoration involving only the “Galerie des Sonneurs” above the façade, changing the style and aspect.

The building was largely spared during both World Wars.

Amiens Cathedral has been fully listed as a Historic Monument since 1862. All building work is controlled by the State (Ministry of Culture) that finances and implements the necessary conservation work.

Amiens Cathedral is State-owned and managed in part by the Centre for National Monuments (a public body under the authority of the Ministry of Culture), the territorial collectivity and the clergy. Legally, it is of the Catholic doctrine.

A management plan for the property is under preparation. It will designate the role of each of the partners involved in the management of the property, its protection and its enhancement (State, Amiens city, agglomeration community, clergy).

In 2007, at the time of the preparation of the local town plan, a modified protective perimeter was set up in accordance with the Heritage Code. This protective primeter constitues the buffer zone of the property.