Located on a plateau above the Osaka Plain, this property includes 49 kofun (“old mounds” in Japanese). These tombs were for members of the elite. These kofun have been selected from among a total of 160,000 in Japan and form the richest material representation of the Kofun period, from the 3rd to the 6th century CE. They demonstrate the differences in social classes of that period and show evidence of a highly sophisticated funerary system. Burial mounds of significant variations in size, kofun take the geometrically elaborate design forms of keyhole, scallop, square or circle. They were decorated with paving stones and clay figures. The kofun demonstrate exceptional technical achievements of earthen constructions. 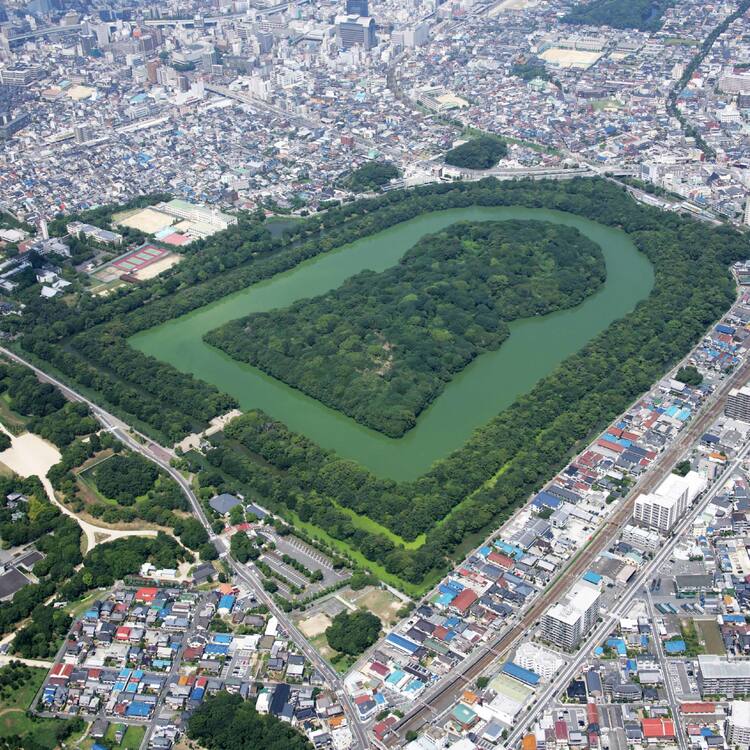 Located on a plateau above the Osaka Plain, the Mozu-Furuichi Kofun Group is a serial property of 45 components which contains 49 kofun (‘old mound’), a large and distinctive type of burial mound. The selected kofun are found in two major clusters, and are the richest tangible representation of the culture of the Kofun period in Japan from the 3rd to 6th centuries, a period before Japanese society became an established centralised state under the influence of the Chinese system of law. The kofun have a range of contents, such as grave goods (weapons, armour, ornaments); and clay figures used to decorated the mounds, known as haniwa (in the form of cylinders arranged in rows, or representations of objects, houses, animals and people). Understood as tombs for kings’ clans and affiliates during this period, some of the kofun are Ryobo (imperial mausolea) and are managed by Japan’s Imperial Household Agency. The serial components have been selected from a total of 160,000 kofun from around Japan and represent the ‘middle kofun’ period (late 4th to late 5th centuries) which is considered to be the peak of the Kofun period. The attributes of the property are the 49 burial mounds, their geometric forms, methods and materials of construction, moats, archaeological materials and contents (including grave goods, burial facilities and the haniwa). The settings of the kofun, their visual presence in the Osaka region, and the remaining physical and visual links between the kofun are important attributes; as is the evidence of the distinctive funerary practices and ritual uses.

Criterion (iii): While 160,000 kofun are found throughout Japan, the Mozu-Furuichi Kofun Group represents and provides exceptional testimony to the culture of the Kofun period of Japan’s ancient history. The 45 components demonstrate the period’s socio-political structures, social class differences and highly sophisticated funerary system.

Criterion (iv): The Mozu-Furuichi Kofun Group demonstrates an outstanding type of ancient East Asian burial mound construction. The role of the kofun in the establishment of social hierarchies within this particular and significant historical period, as well as the tangible attributes such as the clay sculptures, moats and geometric terraced mounds reinforced by stone, are outstanding.

The Mozu and Furuichi groups of kofun provide a cohesive narrative of the kingly power expressed through the clustering of the 49 kofun, the range of types and sizes, the grave goods and haniwa, and the continuing ritual uses and high esteem that these sites hold within Japanese society. The integrity of the serial property is based on the rationale for the selection of the components and their ability to convey the Outstanding Universal Value of the kofun. The intactness of the individual components, the material evidence of the mounds and their context, and the state of conservation are also determinants of integrity. Issues that impact on the integrity of the serial property include loss of some features (such as moats), and changes to the uses and settings of the components due to the close proximity of urban development.

Despite changed uses and landscape treatments, and the high degree of 20th century urbanisation of the Osaka region, the kofun are a significant visible and historical presence within the present-day landscape. The authenticity of the selected kofun is demonstrated by their forms, materials and extensive archaeological contents, as well as the esteem which they engender in Japanese society. While the Ryobo generally demonstrate a high degree of authenticity, there are variations within the series. There is a need to ensure that seibi works are subject to impact assessment and reviewed in order to sustain the authenticity of the kofun.

The management system is based on the establishment of the Mozu-Furuichi Kofun Group World Heritage Council (comprised of representatives of the Imperial Household Agency, and the relevant Prefectural and City Governments, with the Agency for Cultural Affairs as an Observer). The Council is advised by the Mozu-Furuichi Kofun Group World Heritage Scientific Committee. The Comprehensive Management Plan outlines the implementation of the protection and management of the property and the buffer zones. The Mozu-Furuichi Kofun Group World Heritage Council has overall responsibility for implementing the Action Plan and ensuring coordination between different organisations. The Osaka Prefecture and each of the relevant City governments has a Disaster Prevention Plan; and there are museums and interpretation facilities in the cities in Osaka Prefecture: Sakai, Habikino and Fujiidera. The Sakai City Government is planning a new interpretation facility in the Mozu area, which should be subject to Heritage Impact Assessment.

Factors affecting this property are those associated with the close proximity of urban development, creating significant potential pressures on the buffer zones. Pressures on the conservation of the kofun occur through the erosion of the earthen mounds, poorly managed vegetation growth, and the need to maintain water quality of the moats. These are actively managed. The conservation measures are appropriate and well-resourced, although actions by the various governments, private owners and communities must continue to be well-coordinated. The monitoring arrangements are adequate, although they could be further enhanced through further development of non-invasive techniques for periodically monitoring the structural condition of the mounds, and indicators for monitoring the interests and support of local residential communities.