Taputapuātea on Ra’iātea Island is at the centre of the ‘Polynesian Triangle’, a vast portion of the Pacific Ocean, dotted with islands, and the last part of the globe to be settled by humans. The property includes two forested valleys, a portion of lagoon and coral reef and a strip of open ocean. At the heart of the property is the Taputapuātea marae complex, a political, ceremonial and funerary centre. It is characterized by several marae, with different functions. Widespread in Polynesia, the marae were places where the world of the living intersected the world of the ancestors and the gods. Taputapuātea is an exceptional testimony to 1,000 years of mā'ohi civilization. 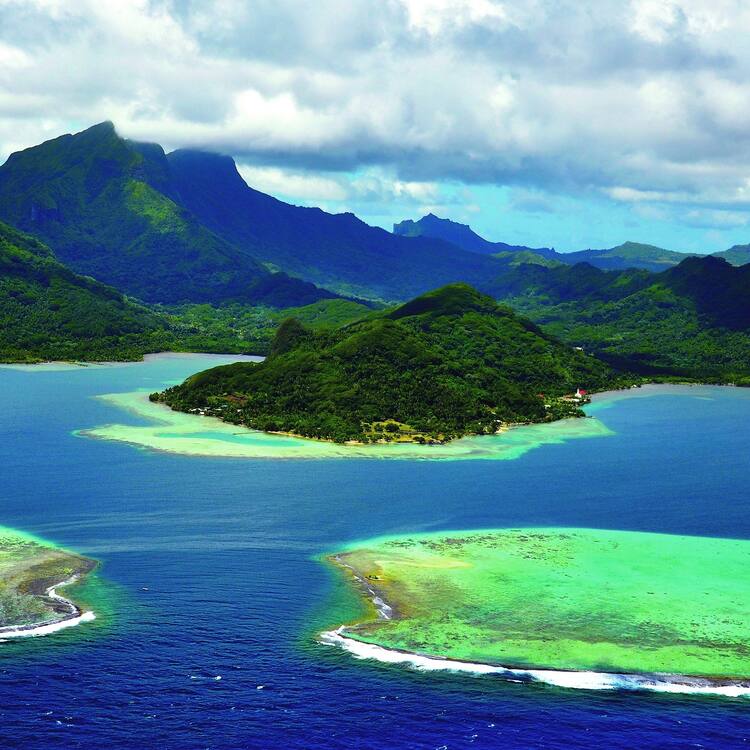 Taputapuātea is a cultural landscape and seascape on Raiatea Island. Raiatea is at the centre of the “Polynesian Triangle,” a vast section of the Pacific Ocean dotted with islands, the last part of the globe to be settled by humans. At the heart of the property is the Taputapuātea marae complex, a political, ceremonial, funerary and religious centre. The complex is positioned between the land and sea on the end of a peninsula that juts into the lagoon surrounding the island. Marae are sacred ceremonial and social spaces that are found throughout Polynesia. In the Society Islands, marae have developed into quadrilateral paved courtyards with a rectangular platform at one end, called an ahu. They have many simultaneous functions.

At the centre of the Taputapuātea marae complex is marae Taputapuātea itself, dedicated to the god ‘Oro and the place where the world of the living (Te Ao) intersects the world of the ancestors and gods (Te Po). It also expresses political power and relationships. The rise in the importance of Taputapuātea among the marae on Raiatea and in the wider region is linked to the line of Tamatoa ari’i (chiefs) and the expansion of their power. Taputapuātea was the centre of a political alliance that brought together two widespread regions encompassing most of Polynesia. The alliance was maintained by regular gatherings of chiefs, warriors and priests who came from the other islands to meet at Taputapuātea. The building of outrigger canoes and ocean navigation were key skills in maintaining this network.

A traditional landscape surrounds both sides of the Taputapuātea marae complex. The marae complex looks out to Te Ava Mo'a, a sacred pass in the reef that bounds the lagoon. Atāra motu is an islet in the reef and a habitat for seabirds. Ocean-going arrivals waited here before being led through the sacred pass and formally welcomed at Taputapuātea. On the landward side, ’Ōpo’a and Hotopu’u are forested valleys ringed by ridges and the sacred mountain of Tea’etapu. The upland portions of the valleys feature older marae, such as marae Vaeāra’i and marae Taumariari, agricultural terraces, archaeological traces of habitations and named features related to traditions of gods and ancestors. Vegetation in the valleys is a mix of species, some endemic to Raiatea, some common to other Polynesian islands and some imported food species brought by ancient Polynesians for cultivation. Together, the attributes of the property form an outstanding relict and associative cultural landscape and seascape.

Criterion (iii): Taputapuātea illustrates in an exceptional way 1000 years of mā’ohi civilisation. This history is represented by the marae complex of Taputapuātea at the seashore and the variety of archaeological sites in the upland valleys. It reflects social organization with farmers who lived in the uplands and warriors, priests and kings settled near the sea. It also testifies to their skill in sailing outrigger canoes across long stretches of ocean, navigation by observation of natural phenomena, and transformation of newly settled islands into places that provided for the needs of their people.

Criterion (iv): Taputapuātea provides eminent examples of marae: temples with cult and social functions built by the mā'ohi people from the 14th to the 18th century. Marae were the points of intersection between the world of the living and that of the ancestors. Their monumental form reflects competition for prestige and power among the ari’i chiefs. Marae Taputapuātea itself is a concrete expression of the paramount alliance formed by its line of chiefs and the cult of worship associated with it, as stones were transported to other islands to found other marae with the same name.

Criterion (vi): As the ancestral homeland of Polynesian culture, Taputapuātea is of outstanding significance for people throughout the whole of Polynesia, for the way it symbolises their origins, connects them with ancestors and as an expression of their spirituality. These living ideas and knowledge are embedded in the landscapes and seascapes of Raiatea and particularly in the marae for the central roles that they once performed.

The property is a relict and associative cultural landscape with attributes that are tangible (archaeological sites, places associated with oral tradition, marae) and intangible (origin stories, ceremonies and traditional knowledge). It is an exceptional example of the juxtaposition and continuity of the ancient (traditional) and modern (contemporary) values of the mā'ohi people and their relationship with the natural landscape. It contains all the elements necessary to express Outstanding Universal Value. The buffer zone is adequate and does not contain any elements that should be in the property.

Credible and objective information confirms authenticity of the major physical attributes of the property. Intangible sources and oral traditions of the mā'ohi people are both diverse and mutually supportive. There is a convergence between the oral knowledge and documentary sources based on testimonies left by early explorers and missionaries. In sum, these factors provide evidence that the information is genuine. Efforts by the community to gather knowledge related to the property and to transmit traditional knowledge in recent years have strengthened the authenticity of the cultural landscape. Some marae at the marae complex of Taputapuātea have been restored, but the layout of the complex and most of the materials themselves are original.

The Taputapuātea marae complex has been protected since 1952 under French Polynesian law and it has recently been classified as a historical monument. A protective and planning system, called a Zone de Site Protégé, is being put into place that would cover the whole of the property and the buffer zone. A steering committee has guided management of the property since 2012. This committee is creating the permanent management structure for the property and a management plan was adopted in 2015. The plan will preserve the sites of memory that testify to the ancient mā'ohi civilization, protect the marae, preserve the terrestrial and marine environments of the cultural landscape and seascape and preserve and transmit traditional knowledge and skills. A three person secretariat will manage the property in concert with a staffed bureau and the steering committee.