Modern humans first arrived in Europe 43,000 years ago during the last ice age. One of the areas where they took up residence was the Swabian Jura in southern Germany. Excavated from the 1860s, six caves have revealed items dating from 43,000 to 33,000 years ago. Among them are carved figurines of animals (including cave lions, mammoths, horses and bovids), musical instruments and items of personal adornment. Other figurines depict creatures that are half animal, half human and there is one statuette of a woman. These archaeological sites feature some of the oldest figurative art worldwide and help shed light on the origins of human artistic development. 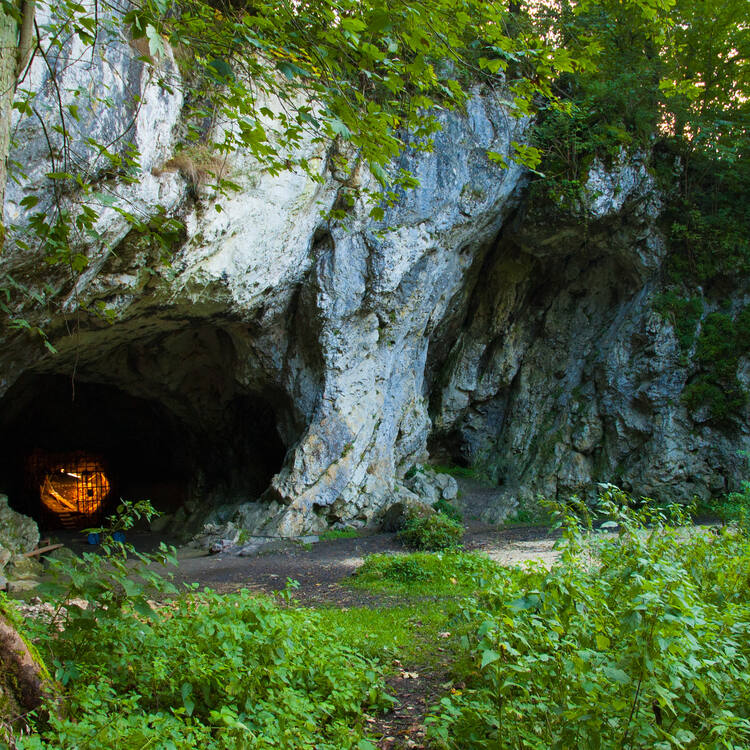 Modern humans first arrived in Europe 43,000 years ago during the last ice age. One of the areas where they took up residence was the Swabian Jura in southern Germany. Here, ancient peoples lived in and among a series of caves which are now archaeological sites. Excavated from the 1860s up to the present day, these six caves have revealed a long record of human presence, including both anatomically modern humans and Neanderthals before that. The focus of this property are the caves with Aurignacian layers, which date from 43,000 to 33,000 years ago. Among the items found at these sites are carved figurines, musical instruments and items of personal adornment. The figurines depict species of animals who lived in that ice age environment – cave lions, mammoths, birds, horses, bovids and fish. Other figurines depict creatures that are half animal, half human and there is one statuette of a woman.

Caves and Ice Age Art in the Swabian Jura represents a unique concentration of archaeological sites with some of the oldest figurative art and the oldest musical instruments yet to be found worldwide. Together with the artefacts and the surrounding landscape, they form an outstanding early cultural ensemble that helps to illuminate the origins of human artistic development. The long and highly productive tradition of research at these sites has had a significant influence on the understanding of the Upper Palaeolithic in Europe.

Criterion (iii): Caves and Ice Age Art in the Swabian Jura provides an exceptional testimony to the culture of the first modern humans to settle in Europe. Exceptional aspects of this culture that have been preserved in these caves are examples of carved figurines, objects of personal adornment and musical instruments. The art objects are among the oldest yet to be found in the world and the musical instruments are the oldest that have been found to date worldwide.

The property includes all six caves in the region that have had excavations of significant Aurignacian deposits, including the four caves containing figurative art objects and musical instruments and their landscape setting. All the elements necessary to express the values of the property are included in the property boundaries. The property includes sufficient consideration of the setting of the caves in relation to the topography and vegetation of the Lone and Ach valleys, including the limestone cliffs, valley floors and adjacent uplands.

The authenticity of the property is supported by the presence of stratified geological deposits in the caves that have served to protect the archaeological layers until their excavation and the surrounding landforms that contain the caves. Systematic archaeological research has been undertaken at these sites for more than a century and documentation is ongoing. The archaeological evidence gained from these excavations underpins the authenticity of the property. Several caves have unexcavated deposits, and there are other caves within the property that have not yet been investigated, providing the basis for future research.

The Cultural Heritage Protection Act of Baden-Württemberg (1972) is the main legal enforcement to ensure the protection of the property. The property is administrated by the Ministry of Economic Affairs, Labour and Housing Baden-Württemberg (formerly Ministry of Finance and Economics) and other branches of state, regional and municipal governments. A dedicated manager has been appointed to oversee the property. A management plan and monitoring system is in place. Activities in the plan address the domains of coordination, credibility, conservation, capacity building, cooperation, communication and communities. The managers of the property should continue to ensure and maintain a balance between knowledge from excavation and conservation of the archaeological deposits. A documentation database should be developed to include data on the caves, the finds and all excavations that have taken place.
News