Located at the heart of Andalusia in southern Spain, the site comprises three megalithic monuments: the Menga and Viera dolmens and the Tholos of El Romeral, and two natural monuments: La Peña de los Enamorados and El Torcal mountainous formations, which are landmarks within the property. Built during the Neolithic and Bronze Age out of large stone blocks, these monuments form chambers with lintelled roofs or false cupolas. These three tombs, buried beneath their original earth tumuli, are one of the most remarkable architectural works of European prehistory and one of the most important examples of European Megalithism. 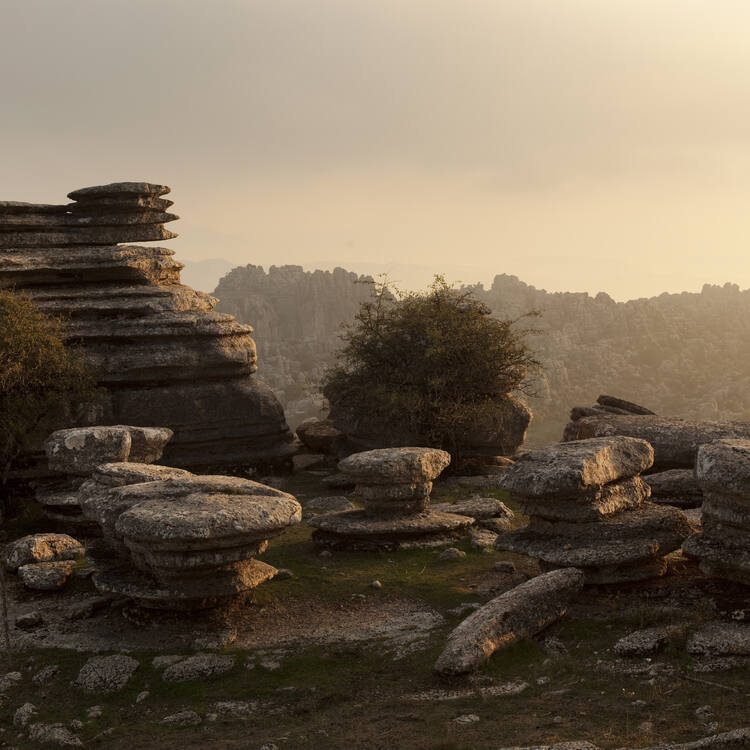 The colossal scale of megaliths characterised by the use of large stone blocks that form chambers and spaces with lintelled roofs (Menga and Viera) or false cupolas (El Romeral) attest to exceptional architectural planning from those who built them and create unique architectural forms. The intimate interaction of the megalithic monuments with nature, seen in the deep well inside Menga and in the orientation of Menga and El Romeral towards presumably sacred mountains (La Peña de los Enamorados and El Torcal), emphasise the uniqueness of this prehistoric burial and ritual landscape. The three tombs, with the singular nature of their designs, and technical and formal differences, bring together two great Iberian megalithic architectural traditions and a variety of architectonic types, a rich sample of the extensive variety within European megalithic funeral architecture.

Criterion (i): The number, size, weight and volume of stone blocks transported and assembled in the basin of Antequera, using rudimentary technology, and the architectural characteristics of the monuments formed by these three megaliths, makes the Antequera Dolmens one of the most important engineering and architectural works of European Prehistory and one of the most important and best known examples of European Megalithism. As such, the dolmens of Menga and Viera and the tholos of El Romeral definitely represent a prime example of the creative genius of humanity.

Criterion (iii): Antequera Dolmens Site provides an exceptional insight into the funerary and ritual practices of a highly organised prehistoric society of the Neolithic and Bronze Age in the Iberian Peninsula. The Dolmens of Antequera materialize an extraordinary conception of the megalithic landscape, being exponents of an original relationship with the natural monuments to which they are intrinsically linked. Differentiating themselves from the canonical orientations towards sunrise, the megalithic monuments shows anomalous orientations: Menga is the only dolmen in continental Europe that faces towards an anthropomorphic mountain such as La Peña de los Enamorados; and the Tholos of El Romeral, facing the El Torcal mountain range, is one of the few cases in the entire Iberian Peninsula where the orientation is towards the western half of the sky. This assembly of the three megalithic monuments together with the two natural monuments represents a very distinctive cultural tradition which has now disappeared.

Criterion (iv): Antequera Dolmens Site is an outstanding example of a megalithic monumental ensemble, comprised of the three megalithic monuments (the Menga and Viera dolmens and the tholos of El Romeral), that illustrate a significant stage of human history when the first large ceremonial monuments were built in Western Europe. The three different types of megalithic architecture seen in this ensemble of dolmens, which are representative of the two great Iberian megalithic traditions (lintelled architecture in the cases of Menga and Viera and the architecture of El Romeral’s false cupola ceiling), and the unique relationship between the dolmens and the surrounding landscape of Antequera (the three megalithic monuments are buried beneath earth tumuli and two megaliths are oriented towards the natural monuments of La Peña de los Enamorados and El Torcal), reinforces the originality of this property.

The three Antequera megaliths conserve all their constitutive elements and still conserve their unitary character. Therefore, they are of adequate size to express their universal value as outstanding examples of megalithic architecture. The three monuments are in good condition and their original structures are almost entirely intact, both the interior rocky structure as well as the tumuli that cover them. Over time, a number of conservation, consolidation and restoration interventions have been carried out that are recognisable and have been preceded by, or have coincided with, archaeological research phases and qualified technical analyses. However, the peri-urban industrial/commercial modern setting in which the three megaliths are located, which have been altered in the past two decades by urban and infrastructure development challenges the integrity of the series. With regard to the natural sites, they have largely maintained this condition in terms of geomorphological configuration and singularity of flora and fauna, without experiencing any considerable anthropic transformations.

The series of investigations that have been carried out are conclusive and unanimous with regard to ascribing the monuments to the said era, the authenticity of the chambers’ stone materials and the area where the tumuli are found. The form and design of each of the three tombs have remained remarkably unaltered in spite of necessary repairs to the fabric and some protection interventions. All components of the property have a tremendous genius loci and sense and spirit of place. The authenticity of each and every one of the component parts in this series is unquestionable. Also, the coexistence in Antequera of the two great megalithic traditions on the Iberian Peninsula and Western Europe has been certified: the Neolithic tradition of lintelled structures and the Chalcolithic tradition of false cupola chambers.

Both the megalithic monuments as well as the natural spaces have been listed and preserved with the relevant protection, heritage or environmental laws, whether these are national, regional or local, which provides them with the required institutional conservation measures. The dolmens of Menga and Viera, and the tholos of El Romeral have individually been declared as Monuments and are also an Archaeological Area that has been declared an Asset of Cultural Interest (BIC). La Peña de Los Enamorados, considered a BIC by the Ministry of Law due to the rock paintings that it contains, is also declared an Archaeological Area BIC. Meanwhile, the El Toro cave (in El Torcal) is currently in the process of gaining status as an Archaeological Area BIC. Due to its natural values, La Peña de los Enamorados is also classified as an Outstanding Site, whilst El Torcal has been declared a Natural Reserve (one of the highest levels of protection provided for by regional environmental law) and a Special Protection Area, and is thus included in the Natura 2000 Network of nature areas within Europe. This is a mainly publicly owned space managed by the Environment and Water Agency, which reports to the Autonomous Government of Andalusia. As a Natural Reserve included in the Andalusian Network of Protected Natural Areas (RENPA), it has its own Natural Resources Management Plan (PORN).

Legal protection is also guaranteed for the buffer zone, given that measures derived from heritage laws themselves have been added to urban planning conditions with a view to protecting the area. The Management Plan for the property includes interventions concerning the conservation and enhancement of the megalithic monuments and their surroundings, which are included in the Master Plan for the Archaeological Ensemble of the Dolmens of Antequera, together with the measures included in the aforementioned PORN for El Torcal. The heritage management process is restricted to three areas: the Archaeological Ensemble, La Peña de los Enamorados and the area of El Torcal. All of them are publicly owned, with the exception of La Peña, which is privately owned; however, under the legal system for Archaeological Zones declared as Properties of Cultural Interest, actions and public management measures may be implemented to maintain and enhance the site. A Special Protection Plan of Antequera Dolmens Site is under preparation and will set out guidelines for the different zones that have an impact on the integrity of the property.

A Coordination Council has been set up for the Antequera Dolmens Site, which is made up of representatives of the administrators and owners of the different component sites, with CADA (Archaeological Ensemble of the Antequera Dolmens) being the agency solely responsible for representing and monitoring the management of the property.