The property is located in central and southern parts of the Republic of Korea, and comprises nine seowon, representing a type of Neo-Confucian academy of the Joseon dynasty (15th -19th centuries CE). Learning, veneration of scholars and interaction with the environment were the essential functions of the seowons, expressed in their design. Situated near mountains and water sources, they favoured the appreciation of nature and cultivation of mind and body. The pavilion-style buildings were intended to facilitate connections to the landscape. The seowons illustrate a historical process in which Neo-Confucianism from China was adapted to Korean conditions. 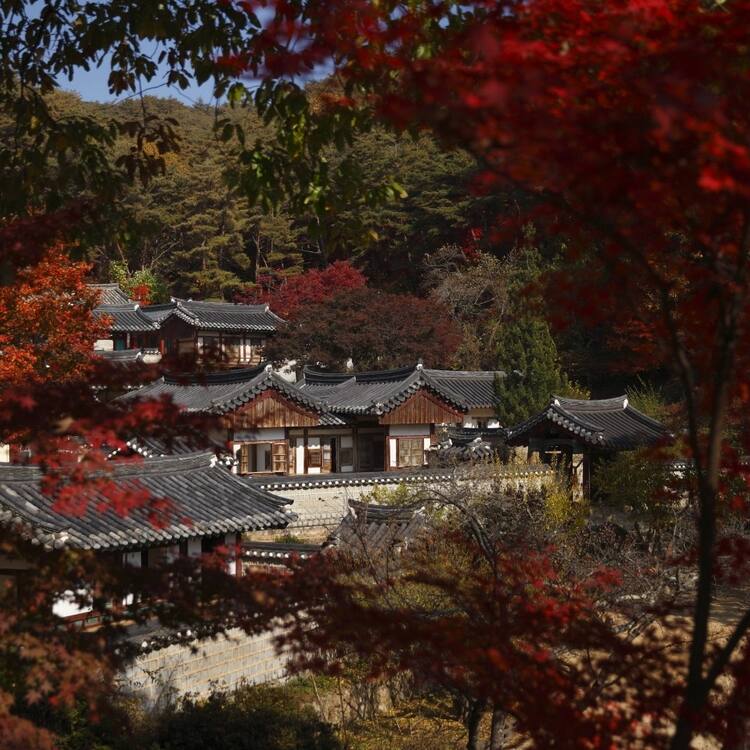 The Seowon, Korean Neo-Confucian Academies is a serial property which comprises nine seowon representing a type of Neo-Confucian academy of the Joseon Dynasty (from the mid-16th to mid-17th centuries CE). It is an exceptional testimony to cultural traditions associated with Neo-Confucianism in Korea.

The property exhibits an outstanding testimony to thriving Neo-Confucian academies that promoted learning of Neo-Confucianism, which was introduced from China and became fundamental to every aspect of Korea.

The local literati at seowon created educational system and tangible structures conducive to fully commit themselves to learning. Learning, veneration and interaction were the essential functions of the seowon which are closely reflected in their design. The seowon were led by sarim or the class of local intellectuals. The seowon developed and flourished as centres for the interests of the sarim.

The primary factor in siting the seowon was the association with venerated scholars. The second factor was the landscape, and seowon are located near mountains and water as part of appreciating nature and cultivating the mind and body. Pavilion style buildings in the seowon facilitated connections to the landscape.

The scholars studied Neo-Confucian classics and literary works and endeavoured in understanding the universe and becoming ideal person. They venerated late contemporary Neo-Confucian figures, and formed strong academic lineage spearheaded by venerated scholars. Furthermore, local literati made significant contribution to disseminating principles of Neo-Confucianism through various social and political activities based on the property.

Criterion (iii): The Seowon, Korean Neo-Confucian Academies are exceptional testimony to cultural traditions associated with Neo-Confucianism in Korea, in the form of educational and social practices, many of which continue. The seowon illustrate an historical process in which Neo-Confucianism from China was tailored to Korean local conditions resulting in academies which are exceptional testimony of this transformative and localising process in terms of function, planning and architecture.

The property retains all attributes that reflect the Outstanding Universal Value of the property. These are the buildings and constructions constituting the seowon, ancillary buildings, entrance gate, dismounting stele, commemorative stele, immediate environments including hills, streams, roads, plantings and visual catchments. The attributes of the property are generally in excellent condition.

The major pressures on the property, development, insect damage, fire, earthquakes and visitors, are being adequately managed. However, they should continue to be monitored.

The property meets the requirements of authenticity. The form and design, and materials and substance are basically intact. The use and function of the seowon, and their traditions, are largely as they were through history, although noting that the educational role has been largely diminished. The location and setting of the seowon have been generally retained, although it is noted that two components have been relocated in the historical past. The intangible heritage, and the spirit and feeling of the seowon have been generally retained.

The nine components are all state-designated heritage.

These legal instruments play a major role in ensuring the systematic conservation of the property in terms of carrying out repairs and safeguarding venerations.

The relevant provinces have also prepared heritage protection ordinances based on the Cultural Heritage Protection Act. These ordinances also offer a basis for the establishment and operation of an organisation for the integrated management of the property.

The management system comprises the Seowon Foundation, seowon steering committees, and central and local (provincial and municipal) governments. The Cultural Heritage Protection Act requires the property to be managed by the relevant local government or seowon community. The Seowon Foundation is in charge of integrated management of the property. The components are managed on a daily basis by government and seowon personnel, with the seowon steering committee responsible for operations and management.

Each seowon has a comprehensive maintenance plan which is equivalent to a management plan. In addition, there are a range of key conservation and management manuals and guidelines. An integrated management document is being developed.

Some risk preparedness exists, and additional planning and systems are being developed.

Current visitor management arrangements are satisfactory although a better integrated presentation of the nine components as a single property is needed.