This fossil site is located at the south-eastern tip of the island of Newfoundland, in eastern Canada. It consists of a narrow, 17 km-long strip of rugged coastal cliffs. Of deep marine origin, these cliffs date to the Ediacaran Period (580-560 million years ago), representing the oldest known assemblages of large fossils anywhere. These fossils illustrate a watershed in the history of life on earth: the appearance of large, biologically complex organisms, after almost three billion years of micro-dominated evolution. 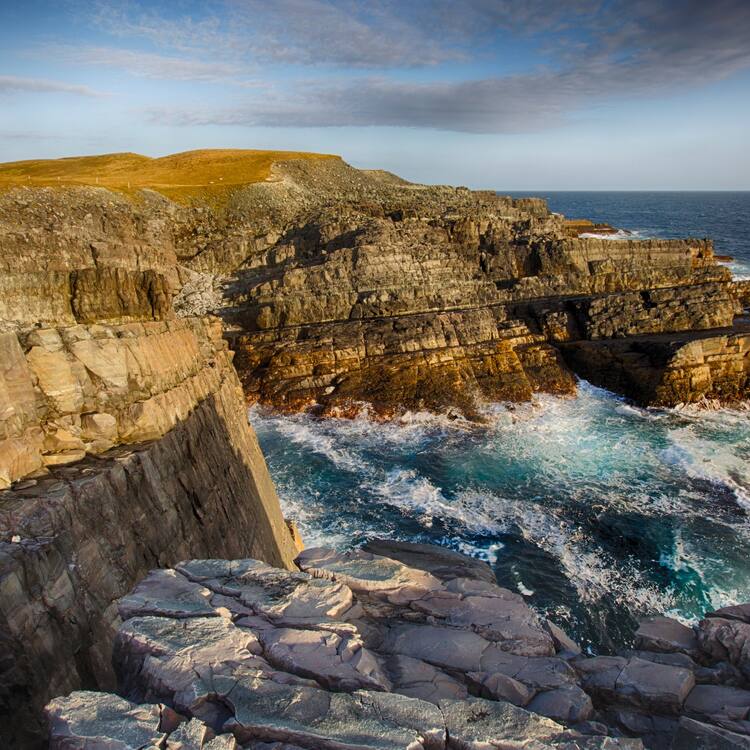 Mistaken Point is a globally significant Ediacaran fossil site almost entirely located within Mistaken Point Ecological Reserve on the south-eastern tip of the island of Newfoundland in eastern Canada. The 146-hectare property consists of a narrow, 17-kilometre-long strip of rugged naturally-eroding coastal cliffs, with an additional 74 hectares adjoining its landward margin designated as a buffer zone. The superbly exposed, 2-kilometre-thick rock sequence of deep marine origin at Mistaken Point dates to the middle Ediacaran Period (580 to 560 million years ago) and contains exquisitely preserved assemblages of the oldest abundant and diverse, large fossils known anywhere.

More than 10,000 fossil impressions, ranging from a few centimetres to nearly 2 metres in length, are readily visible for scientific study and supervised viewing along the coastline of Mistaken Point. These fossils illustrate a critical watershed in the early history of life on Earth: the appearance of large, biologically complex organisms, including the first ancestral animals. Most of the fossils are rangeomorphs, an extinct group of fractal organisms positioned near the base of animal evolution. These soft-bodied creatures lived on the deep-sea floor, and were buried and preserved in exceptional detail by influxes of volcanic ash – each layer of ash creating an “Ediacaran Pompeii.” Modern erosion has exhumed more than 100 fossil sea-floor surfaces, ranging from small beds with single fossils to larger surfaces adorned with up to 4,500 megafossils. The animals died where they lived, and their resultant fossil assemblages preserve both the morphology of extinct groups of ancestral animals and the ecological structure of their ancient communities. Radiometric dating of the volcanic ash beds that directly overlie the fossil-bearing surfaces is providing a detailed chronology for 20 million years in the early evolution of complex life.

Criterion (viii): Mistaken Point fossils constitute an outstanding record of a critical milestone in the history of life on Earth, “when life got big” after almost three billion years of microbe-dominated evolution. The fossils range in age from 580 to 560 million years, the longest continuous record of Ediacara-type megafossils anywhere, and predate by more than 40 million years the Cambrian explosion, being the oldest fossil evidence of ancestors of most modern animal groups. Mistaken Point contains the world’s oldest-known examples of large, architecturally complex organisms, including soft-bodied, ancestral animals. Ecologically, Mistaken Point contains the oldest and most diverse examples of Ediacaran deep-sea communities in the world thus preserving rare insights into the ecology of these ancestral animals and the early colonization of the deep-sea floor. Other attributes contributing to the property’s Outstanding Universal Value include the world’s first examples of metazoan locomotion, exceptional potential for radiometric dating of the assemblages, and evidence for the role of ancient oxygen levels in the regional and global appearance of complex multicellular life.

The clearly defined property boundary encompasses coastal exposures preserving all the features that convey its Outstanding Universal Value. All of the key fossils and strata are within the property. The width of the property and its buffer zone, which in large part corresponds to the Mistaken Point Ecological Reserve, are sufficient to absorb the very gradual, long-term retreat of the coastline due to natural erosion. The natural erosion of the site will refresh the fossil exposures over time.

The vast majority of Mistaken Point’s fossils – including several type specimens – remain in situ in the field and are thus available for study in their ecological context. Several hundred fossil specimens were collected prior to Mistaken Point Ecological Reserve being established; most of these are currently housed in the Royal Ontario Museum and form the bulk of the type specimens for taxa named and defined from Mistaken Point. Nonetheless the property is thought to contain more specimens of Ediacara-type impression fossils than the sum total of every museum collection on Earth.

Few traces of past human activities remain and none directly affect the property’s key attributes. Visitation to the site is modest and strictly controlled. The prospect of modern development within or adjacent to the property is minimal and does not impinge upon its coastal outcrops. Incidents of vandalism are very rare and no successful fossil thefts have occurred since the property was designated as an ecological reserve in 1987. No inhabitants reside permanently within the property or its buffer zone.

The property is provincially owned and is managed by the Parks and Natural Areas Division of the Newfoundland and Labrador Department of Environment and Conservation. Virtually all of the property, plus most of its buffer zone, lie within Mistaken Point Ecological Reserve which is protected under the Province’s Wilderness and Ecological Reserves Act (1980) and Fossil Ecological Reserve Regulations (2009). With one exception, the remaining portions of the property and buffer zone are protected as Crown Lands Reserves under the provincial Lands Act (1991). Only one small part (0.5 percent) of the buffer zone has been identified as private land; current and anticipated land use is complementary to the rest of the buffer zone.

The property’s key coastal exposures are further protected by the ecological reserve’s Fossil Protection Zone; access to this zone is by permit only. Undertaking activities such as scientific research at Mistaken Point requires a permit issued by the managing agency. Development is prohibited within the ecological reserve.

The comprehensive management plan developed for the property and its buffer zone is adaptive and will be revised as required. Input from local residents regarding management issues is channelled through the property’s World Heritage Advisory Council. For management purposes, the property is best treated as a finite fossil site. Except for official salvage of scientifically valuable specimens, collecting fossils is illegal. For conservation reasons, public viewing of the fossils is by guided tour only. Daily patrols of the property are conducted year-round and a volunteer Fossil Guardian Program is in operation.

The most significant threats to be managed are the ongoing issue of change resulting from natural erosion processes, and impacts of human activity. Under the monitoring plan, vulnerable fossil localities are regularly surveyed and any problems documented. The rate of erosion appears very slow and any loss of fossils to erosion may be offset by new exposures. Monitoring processes should trigger appropriately considered management responses to document fossil evidence, if any significant losses from erosion are identified. The carrying capacity of the property is limited and the cumulative environmental impact of visitation is closely monitored and limited. Limited signs and visitor access to aid presentation of the property are carefully designed and sited to avoid adverse impacts upon the property’s Outstanding Universal Value.

Through its long-term pledge to provide operational funding and staffing, the Government of Newfoundland and Labrador is committed to ensure that the highest possible standards of protection and presentation are maintained in the property.